The offensive line the Florida Gators took to Columbia, Missouri yesterday for their tilt against the Missouri Tigers needs to be taken back for a refund.

As bad as the Florida Gators' offensive lines have been since the Pounceys left, this was probably the worst game for the unit. It's pretty much just a pride thing now. Their manhood has been questioned, and, so far, they've responded as if they have none.

Against the Missouri Tigers the offensive line gave up six sacks, paved the way for just 59 rushing yards, and couldn't pass block to save their lives. Missouri defensive end Michael Sam looked like the next Jadeveon Clowney, and quarterback Tyler Murphy had his worst game as a starter as a result.

The Florida Gators' 151 yards of offense came on a total of sixty plays; if you're doing the math yourself, that's around 2.5 yards per play.

I think it's safe to say that Florida's bye week next weekend is a good thing. The Gators can regroup and hopefully get their act together, because the season is now on the brink. 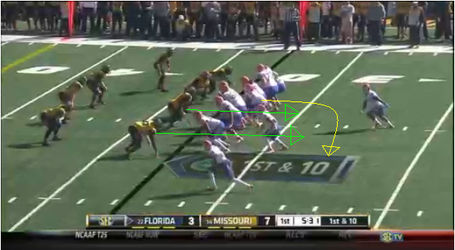 On this play early in the game, Murphy is going to roll out slightly to the left. Unfortunately for him and the Gators, the left side of the offensive line decided to take this play off. 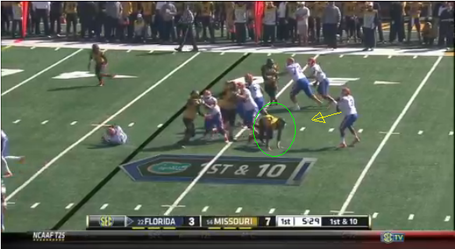 As Murphy sets his feet to look down the field, there's already a defender in the backfield and coming for him. He's not going to have the time necessary to do much of anything on this play. 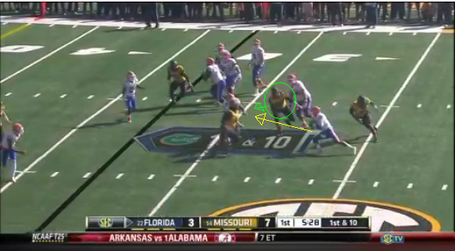 As soon as Murphy begins to scramble, it's over. Hoch (green circle) has both his sights and the right angle to get to Murphy before he can get back to the line of scrimmage.

Play No. 2: Sam gets his first sack 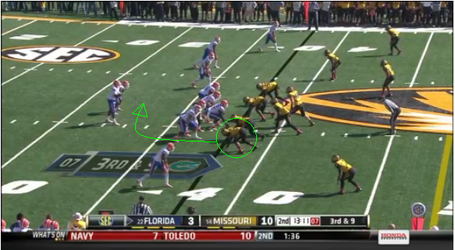 On this play, one of the worst offensive linemen the Gators have had in years gets burned so bad he should have checked out of the game and into a medical facility for third degree burns on his hands. Tyler Moore has been nothing but a massive disappointment since his transfer from Nebraska. 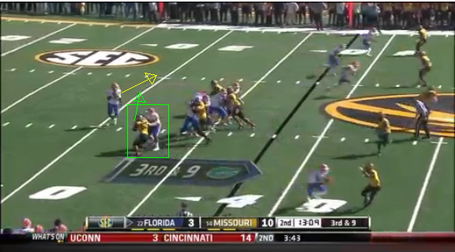 As the play develops, you can see that while Moore is somewhat holding his own, it won't be for long. Sam has the leverage and is going to use his speed to get around Moore to Murphy. Murphy does a good job on this play of sensing the pressure, but as he begins to run to the left, it's clear he won't get very far. 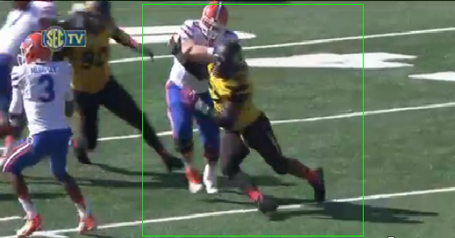 You can see here that Sam does nothing special other than use his speed. Moore is just beaten badly. 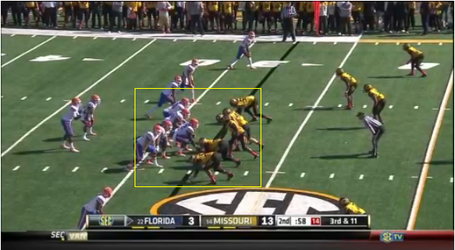 The Tigers are going to come on an all-out blitz here, and while I realize that even the best offensive lines sometimes get burned by the blitz, this one is beyond the pale. The Tigers will blitz six players and the Gators will counter that with six blockers of their own.

I think, upon first glance, only two were blocked. 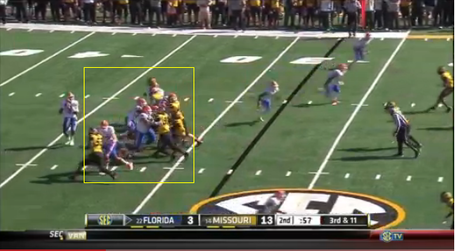 As the blitz up the middle arrives, it appears as though the offensive line might hold and things could work out for the Gators. 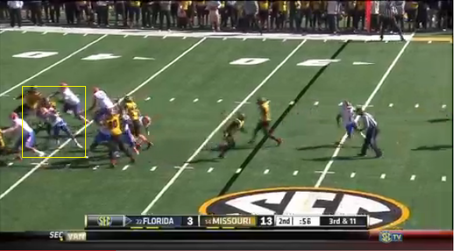 The offensive line then promptly falls apart, Murphy gets drilled, and to make matters worse, the ball comes out and the Tigers' Andrew Wilson recovers it. What a great way to take yourselves out of a possible scoring opportunity and end the first half.

There's enough video remaining to spend an entire second post on the offensive line, but ... well, do you wanna see that? We've still got the defense, which should be fun, and Kelvin Taylor's drive.

I'll leave it up to the comments to decide where we go from here. We've still got a half of football remaining for the offensive line (which will not include Taylor's touchdown, earmarked for Tuesday morning) so we can take the next review somewhere else.