Florida vs. Missouri, Theater of Operations: Gators' defense picks up where it left off

Against the Missouri Tigers on Saturday, the Florida Gators' defense did the best it could. But missing key players to various injuries showed, as they were gashed for yard after yard.

Share All sharing options for: Florida vs. Missouri, Theater of Operations: Gators' defense picks up where it left off

The Florida Gators did the best they could on defense against the Missouri Tigers on Saturday. Without Dominique Easley and Roland Powell, though, things aren't easy, and Florida's offense complicated matters by handing over short fields repeatedly.

Still, despite hemorrhaging yards, they held their own, holding the Missouri offense to four-of-14 on third down, with a couple of key stops early that kept the Gators in the game. Missouri did have exactly 500 yards of offense, including 205 yards rushing, but a lot of that would have been different with Easley in the game.

The Gators also created two turnovers, but lapses in the secondary, including the loss of starting strong safety Cody Riggs on the first play of the game, helped permit Missouri's offense to say on the field for far too long.

Play No. 1: Riggs is ejected for targeting 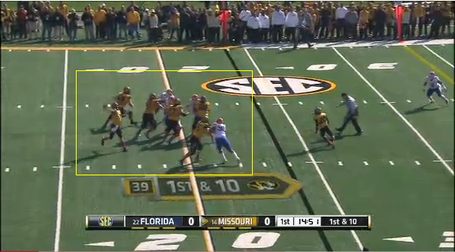 To set this play up, all you need to know is that it's a pass play down the right sideline and the Gators' defense got absolutely no pressure. This allowed Missouri quarterback Maty Mauk the time needed to get off a pretty good pass. 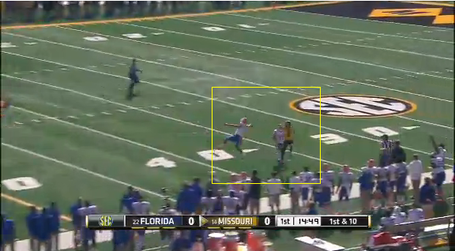 You can see here that it was a pretty good throw that was just barely over the outstretched hand of Vernon Hargreaves III, and that Riggs is now coming in to mop up. I guess you can say that Riggs made a mistake by caring and trying too hard. 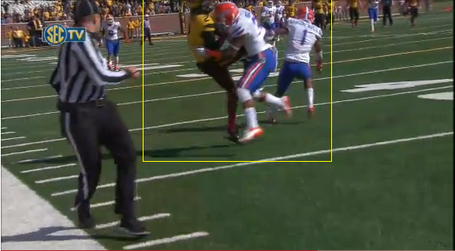 Football is a dying sport as a result. 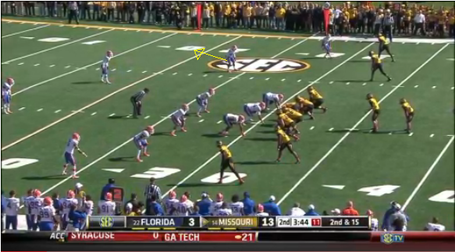 On this play, Poole barely moves. He drifts a little ways back and a little to his left. Mauk just doesn't see him at all, and if there was a chance for the Gators to get back into the game this was it. 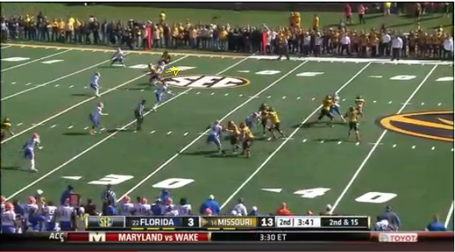 You can see from this picture that as Mauk is releasing the ball, his intended target (right above Poole) has begun to look back for the ball. Poole has not bitten on the deep receiver, because the ball is thrown before that receiver has a chance to get by on the route.

As a result, Poole is in perfect position to come over, step in front of the intended receiver, and pick the ball off. It's a bad play design with bad timing, and it costs the Missouri offense ... but only a little, as it would turn out. 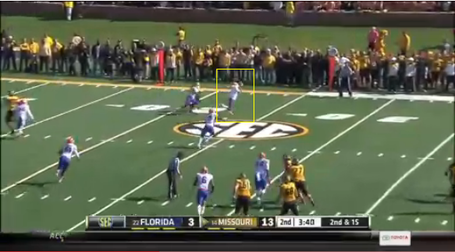 As Poole makes the interception, you can see that there is no way this pass is completed even if Poole isn't involved in the play. Poole returns the interception 25 yards to the 50, but the Gators would give the ball up on a sack and fumble after putting together a nice little drive to get into field goal range. 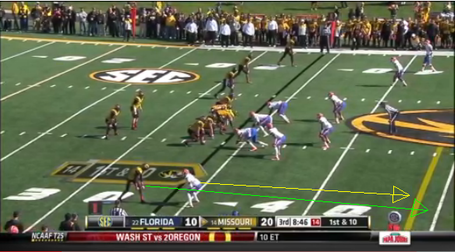 Going into the bye week, the Gators have more than just a couple of things to work on. One of them is clearly Purifoy's coverage of receivers one-on-one. He should be given help on every play. 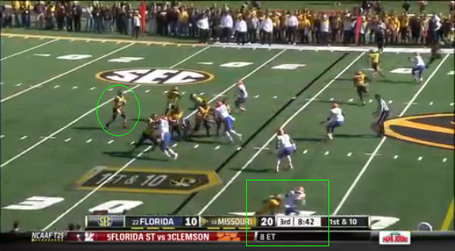 Mauk attempts a quick pump fake to the other side of the field, but, as you can see, Purifoy isn't even looking at that so it's not like that move did anything. He just got burned on a go route for like the 10th time this season. 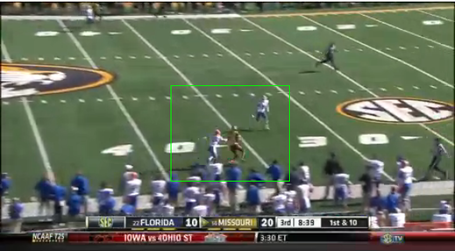 You can see here the safety is arriving late on the play. Would things have been different if Riggs was back there? Who knows. But it's not like it would have mattered in the long run. Missouri probably still runs away without this play.

No excuses for sure, but there comes a point in time where, as pointed out in the game thread, you eventually don't have players for man down, man up.