Tomorrow night the Florida Gators take on the Arkansas Razorbacks in The Swamp. We're here to give a preview of the Razorbacks' 31st-ranked rushing attack, led by Alex Collins and Jonathan Williams.

Share All sharing options for: Florida vs. Arkansas, Theater of Operations: Analyzing the Razorbacks' rushing attack

The Arkansas Razorbacks began the season with three straight wins, albeit against Louisiana-Lafayette, Samford and Southern Miss, things were looking up for the 'Hogs this year. Then the reality of college football hit them like an empty trough.

Back-to-back losses to Rutgers and Texas A&M have pretty much shown the 'Hogs for who they are. Which is of course a rebuilding team trying to find an identity with a new coach. Which leads me to say, gone are the days of Bobby Petrino's high flying passing offense and in with Bret Bielema's B1G-inspired rushing attack.

That attack is led by twosome Alex Collins and Jonathan Williams, who combined have rushed for 1,000 and six touchdowns almost through the halfway point in the season. Don't feel bad for their quarterback, Brandon Allen, has had a pretty good year as well, but we're not here to talk about that at moment.

You can go ahead and remember his name though, on the off chance (well, "off" is probably bad wording) he has a difference maker type of game.

The original plan was to look at just video against Texas A&M, because four of the first five games the Razorbacks have played were against either sub-par FBS or FCS opponents,but there wasn't enough video on Williams. So we'll include look at some Southern Mississippi tape for that. 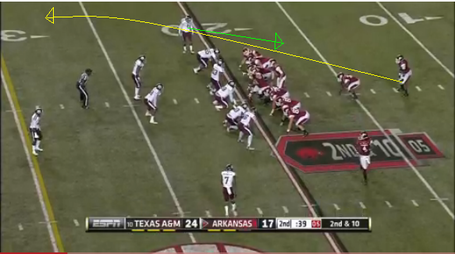 Running at the blitz, yeah! Collins will take the handoff to the right which just so happens to be from the side the Texas A&M defense will be blitzing from. That of course will free up space past the line and allow Collins to get major yardage. 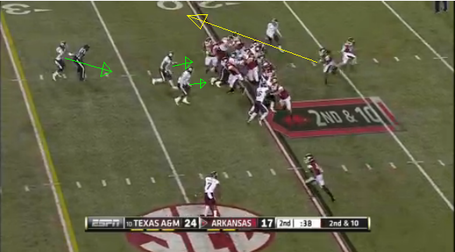 Just before Collins is going to get past the A&M blitz, you can see that the three defenders who remain in the play are creeping up too close to the line. Once they bite on the small fake to the left, it's over. They are out of position to make a play on the other side of the field. 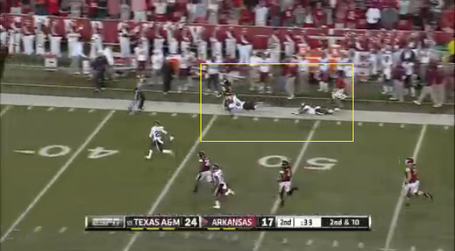 One thing about this play that jumps out at you is the speed shown by Collins. It's deceptive in a big way. He outran the A&M defenders while they were on him for about ten yards before geometry finally caught up with him. And that's after one guy completely missed the tackle. 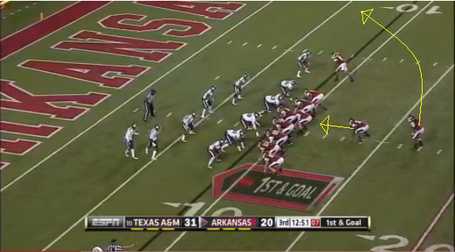 Here's a play that I wish the Gators would run more often. It seems though, that the Gators haven't ran something like this since Spurrier or Zook was the quarterback. The play is going to be a fake handoff to the fullback up the middle and then a pitch out wide to Collins and all he has to beat is one defender.

I like this play because it puts the odds in your favor as an offense in a big way. 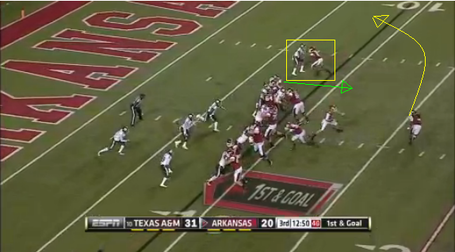 Only one A&M defender is going to go with Collins on the play as the wide receiver does a great job blocking on the play as well. He's got space to make moves and the speed to get past one guy yet again. 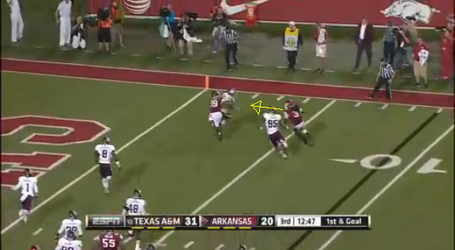 The receiver holds his block for the necessary ten yards as Collins makes a cut inside for the touchdown. 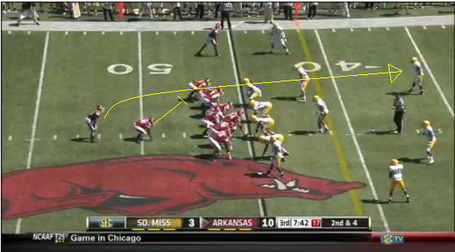 Williams is the power back in the Razorback offense and this play shows it. He's going to burst through the hole but doesn't quite have the speed that it takes, but this is against Southern Miss so he'll be fine. Against the top tier SEC teams though, he won't have great games.

The fullback on the play becomes the lead blocker through the line of scrimmage. 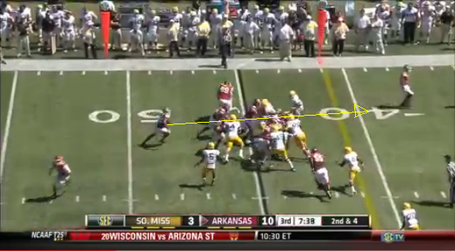 Right before he hits the line of scrimmage, a small lane opens up. He'll emerge from that and be off to the races. 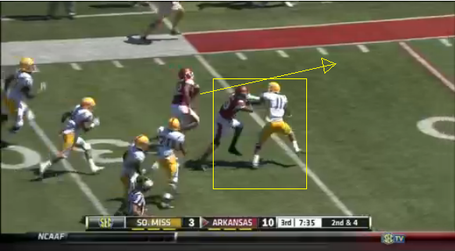 As in the second play profiled today, a wide receiver gets in a key block. Don't worry, it's the same receiver and his name is Javontee Herndon. Seems to be a thing with that guy, he's a good blocker.

Anyway, once Herndon gets in his block, even though Williams doesn't have the best speed in the world that allows him just enough time to get into the endzone.

Even though I think the Gators' defense will suffer a bit from the loss of Dominique Easley as the season goes on, by that I mean struggle against the run, I think the Gators will be fine here. The Razorbacks don't really pose too much of a threat on the offensive side of the ball because they lack big-time playmakers aside from the running game.

The cornerbacks and safties on the Gators' defense should have a fairly easy time defending the pass and as a result I think that will allow the Gators to load the box to help against the run.

Gators win in a game that is closer on the scoreboard than in the stats yet again, 21-9.