The story on offense during the Florida Gators' victory over the Arkansas Razorbacks on Saturday night was the rise of the big play led by Solomon Patton. His connection with quarterback Tyler Murphy is growing by the day.

And just like that, the Florida Gators have their No. 1 wide receiver.

Solomon Patton recorded a career-high 124 yards receiving in last night's victory over the Arkansas Razorbacks to mark his second big receiving game of the year. He's becoming the go-to receiver for Tyler Murphy (as he probably was with Jeff Driskel), and doubled the receptions of the next Gators receivers.

Along with the career day in yardage, Patton also scored two touchdowns. The first one allowed the Gators to get into halftime with a 10-point lead, and the other put the game on ice for Gators. Patton also added 14 yards rushing on two carries, but that mattered little throughout the course of the game.

Patton's rise this year is somewhat of a surprise, since he was little more than an afterthought in the passing game before this year. In his career leading up to 2013, he was responsible for only eight receptions for 79 yards and no touchdowns.

This year, he's got 19 receptions for 348 yards and four touchdowns.

As his rapport with Murphy continues to be on the up and up, I fully expect those numbers to to rise as well. 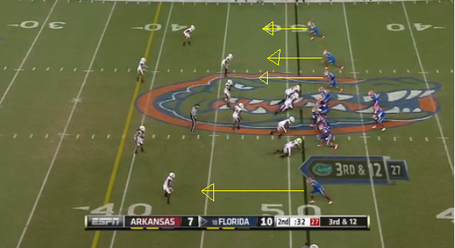 A four wide receiver set? I'm a fan. This is something of a rare formation for a Will Muschamp-coached team. Aggressive play calling from a passing standpoint!

(I'm only half kidding, but still, this is awesome.) 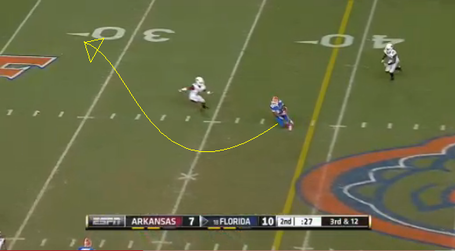 Murphy does a great job of stepping up in the pocket to find room to throw this ball. Patton catches it and makes the correct turn to get up field. Out of all the receivers on this Florida team, Patton is far and away the most dangerous in open space. 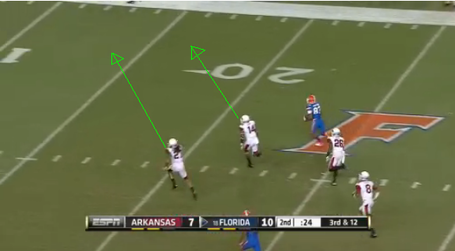 Patton is going to outrun two defensive backs who've got the angle on him. Impressive. 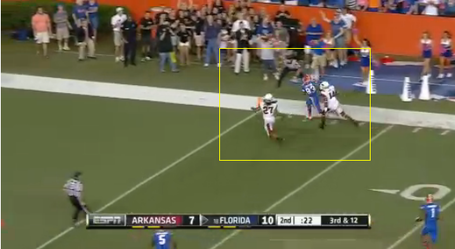 Patton does a very job of staying inbounds as he races towards the goal line. This play was big because not only was it on third down, in a 10-7 game, but it allowed the Gators to jump out to a big halftime lead as well. Being down 10 points with this Gators defense baring its teeth is probably too much for a team like Arkansas to overcome. 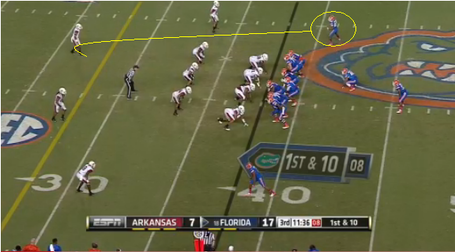 Patton is just going to get beyond on the first down line here and run a little curl route. He came in motion before the snap from the left side of the play to the right. 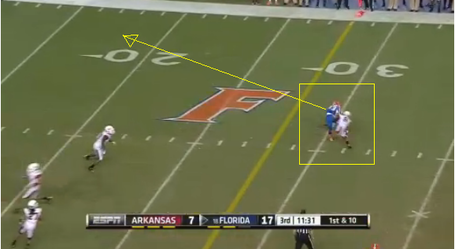 A decent throw by Murphy causes Patton to come back a little further than designed, but the location of the throw allows Patton to break the first tackle and head down the field. 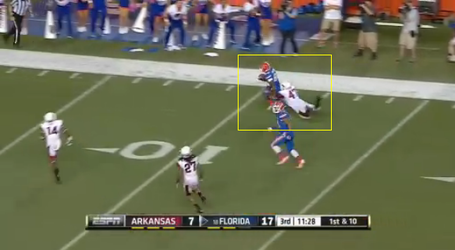 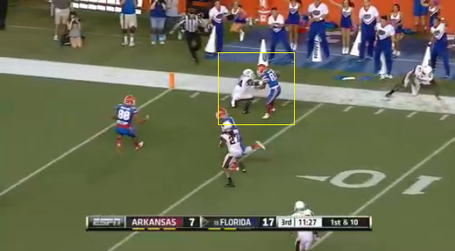 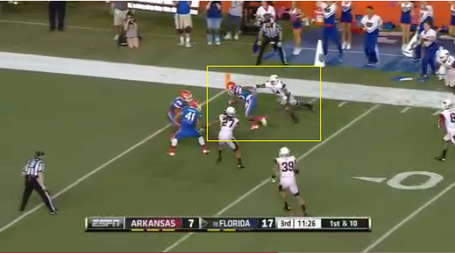 Those missed tackles (three, if you count the one right after the catch) and this cut to the inside allow Patton to cross the goal line for the touchdown. Also note that Hunter Joyer has arrived from 40 yards down the field to help out.

There's more to come on Monday and Tuesday, including Loucheiz Purifoy's expected return to greatness, a few sacks, and a touchdown catch by Valdez Showers.

For now though, enjoy the fact that the Gators have a No. 1 receiver in Patton.