Florida vs. Arkansas, Theater of Operations: Loucheiz Purifoy leads D against the 'Hogs

Loucheiz Purifoy finally snapped out of his mini-funk and rose to the occasion against the Arkansas Razorbacks on Saturday night.

Share All sharing options for: Florida vs. Arkansas, Theater of Operations: Loucheiz Purifoy leads D against the 'Hogs

I want to apologize for the lack of a Theater post yesterday morning as something personal came up during writing. Things are back on schedule now, no worries.

Loucheiz Purifoy finally snapped out of his mini-funk against the Arkansas Razorbacks on Saturday night with a couple big plays that we were all waiting to see. His funk began after starting the season on the bench following some extracurricular activities before the season even began.

Some fans wanted him to return there. I, however, did not.

Why, you ask? Because that's not smart football. You don't put a player of his caliber (All-American, All-SEC) on the pine because he's had a bad game or two. And his bad game(s) were the result of teams avoiding his side of the field, so he couldn't "get stats" and the like.

Purifoy was a disappointment? Give me a break. Purifoy is one of the two or three best players we have on the entire team. Without him, our secondary would fall apart. Things would be bad. 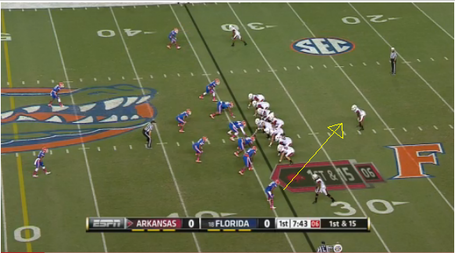 A nice cornerback blitz from Purifoy off the edge allows him to come free towards the quarterback. What allows for the sack to happen is Arkansas's play action, which delays the quarterback setting his feet and looking down the field.

Also, a tip of the hat goes out to the commenter who predicted that Purifoy would cause a fumble during the game. 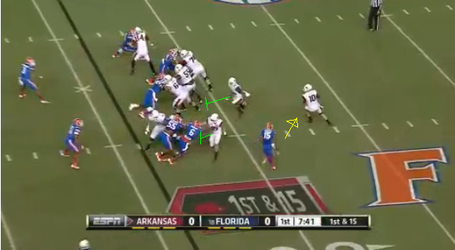 Unfortunately for the Razorbacks, their play action was run to the other side of the field. The running back is now out of the play as a blocker. Purifoy, as a result, is now free to hit the quarterback, who is looking down the field and doesn't see him at all. 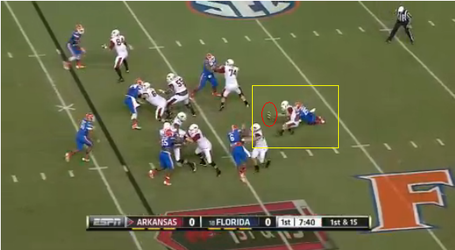 The ball is on the ground (red circle) as Purifoy makes a nice form tackle. The ball would be recovered by Michael Taylor at the 29, but the Gators would go on to miss a field goal (it was blocked; same thing) on the drive and the score would remain tied at zero.

Play No. 2: Purifoy's interception and touchdown 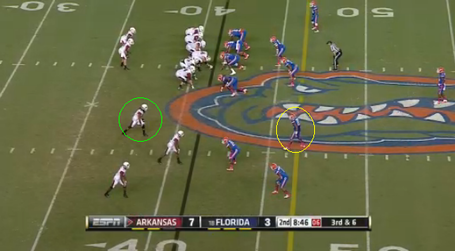 Purifoy will be covering the inside receiver and he's going to take a step or two back and then jump the route. Why the quarterback even makes this throw is beyond me, but, hey, I like mistakes like this when it's not the Gators making them. It's also about time that Purifoy got his due as he'd been unlucky this season. 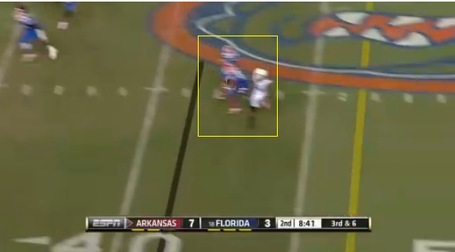 The interception is made and the he's off to the races. 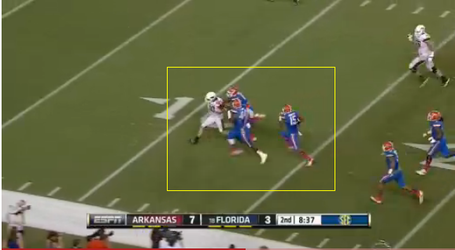 On the return, the only Razorback who has a chance to get him is the quarterback. But Dante Fowler, Jr. and others make sure that doesn't happen. A very nice convoy escorts Purifoy to the end zone for the touchdown, the Gators take the lead, and they would never relinquish it.

It was, once again, a very nice overall performance by Purifoy and the defense as a whole.

It's going to be tough to score on this defense if they play like they should. They have a chance to be one of the best defensive units we've ever seen wear the orange and blue. The subtraction of Dominique Easley hurts, but with him, they'd be great already.

They just have to work a little bit harder now. Man down, man up.