Florida vs. South Carolina, Theater of Operations: Gators looking at a must-win

If the Florida Gators want to avoid a losing season and all that comes with that, they'll need to look at the South Carolina Gamecocks as a must win.

Share All sharing options for: Florida vs. South Carolina, Theater of Operations: Gators looking at a must-win

As the Florida Gators travel to South Carolina tomorrow night to take on the Gamecocks, there are lots of storylines out there. But none is bigger than the Gators' four game losing streak. It's a streak that has brought with it the prospects of the Gators missing out on not only just a winning season, but the bowl game that comes with it, and recruits as well.

And Free Shoes University is looking pretty good on top of everything.

But back to South Carolina. The Gamecocks are pretty darn good, if you haven't noticed. Sure, they've lost twice so far this year, but they're ranked 10th in the country and rank in the top 50 in nearly every offensive and defensive category of note: Passing yards, rushing yards, total offense, points scored, and points against, among other things. They're solid all around.

If you're into the common opponent thing, they've beaten Vanderbilt, Kentucky, Arkansas and Missouri but their two losses have been to Georgia and Tennessee. Those games against the Bulldogs and Volunteers came on the road, though. At Williams-Brice Stadium, things have been different this year.

They don't lose at home.

The Gators are going to have to find a way to beat them. 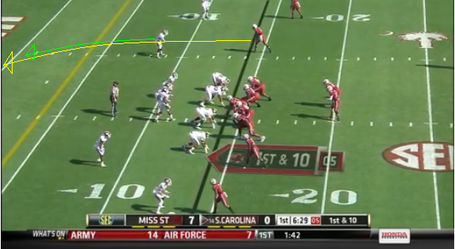 A quick pass and a great route by Shaq Roland on this play makes for easy points for the Gamecocks. They'll also get good protection from their offensive line. 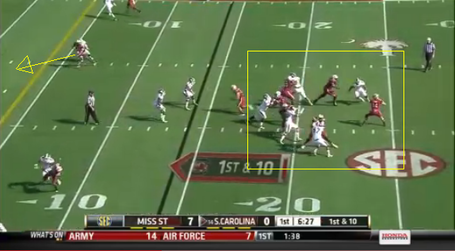 Look at the pocket that Shaw can step up into if he chooses to do so. That's something a Gators quarterback hasn't seen in a few years. Also, Roland has gotten the inside leverage on the defender and is about to break free on his route. 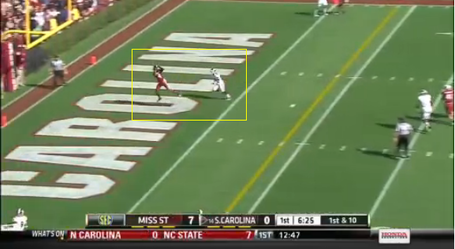 Wide open with a few yards to spare. Great throw made on the money. Touchdown. 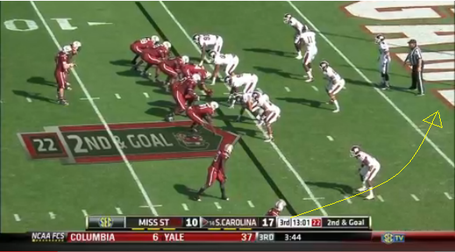 This play is more about the location of the throw than anything else. It's spot on, if you ask me. Damiere Byrd runs a straight out and gains inside leverage, which gives him the space needed. 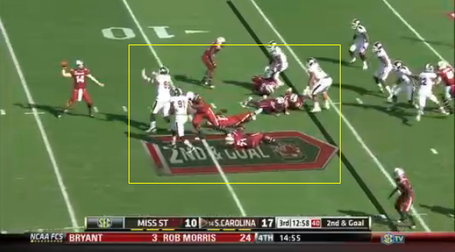 The Mississippi State defense gets a little pressure, but that's by design: The Carolina offense has two receivers out in the flat just in case that option is open as a result of the pass rush. 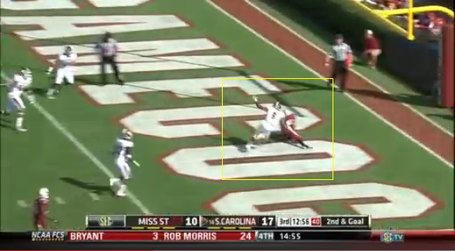 Look at the location of the throw though. It's right on the money. A diving Byrd makes the catch in a location where only he is going to be able to. The defender, who is right there on the play, can't do anything.

Play No. 3: Mike Davis runs for 43 yards against Mississippi State 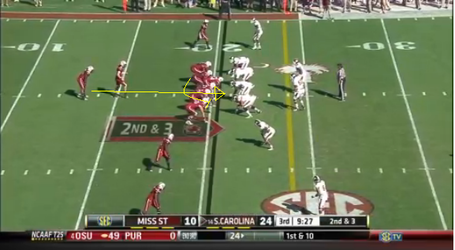 Davis does a great job here of finding the running lane. You'll notice that the left guard is going to pull around to the right to help in getting that lane for Davis. 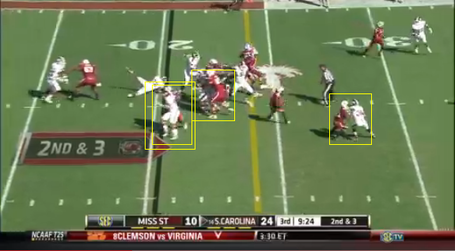 The left guard gets the block (double square) and Davis picks up a few other blocks that will allow him to get into the open field. He'll go to the right, which is the correct move, because he's got more blockers down the field that way. (Because, you know, it's not to the short side of the field and all.) 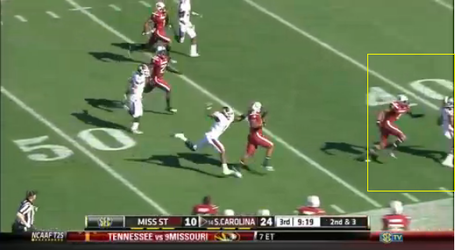 Davis gets a few blocks down the field, and runs until he's eventually caught from behind.

South Carolina is one of those teams that can excel at everything it tries to do. We didn't even get to the Carolina defense and what they do there. In case you're wondering, yes, they can play a little defense.

Also, call me crazy, but I think the losing streak ends tomorrow. I don't know what the final score will be, but I've got a feeling that the Gators will come out of Carolina with a victory.