Kelvin Taylor single handily kept the Florida Gators ahead in South Carolina in the first half with a two touchdown performance.

Despite falling just short of 100 yards rushing, Kelvin Taylor made damn sure to give the Florida Gators everything he had last night in Columbia against the South Carolina Gamecocks. Taylor's game was a tale of two halves last night as well, as he nearly rushed for 90 yards in the first half only to rush for about 10 in the second.

But I'm going to chalk that up to a lack of adjustments made by the offense at halftime as the run heavy packages were stopped by the Gamecocks' defense early and often in the second half. The Gators as a team ran the ball quite well as Mack Brown had a decent game running too and Valdez Showers got loose a couple of times on reverses.

The majority of Taylor's big plays on the ground, including his first quarter touchdown, came from a direct snap as the quarterback ran out wide in the formation.

It's just too bad it didn't last. 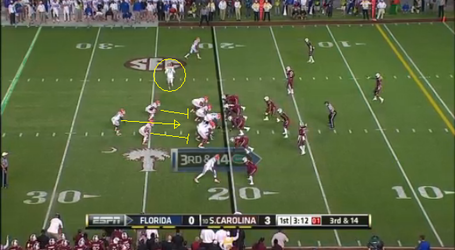 A direct snap for Taylor on this play as quarterback Skyler Mornhingweg (yellow circle) is moving out wide in the hopes of drawing a defender from the box to go with him. This play is to the short side of the field as that's all offensive coordinator runs, but Taylor will take advantage of his two lead blockers and get the touchdown. 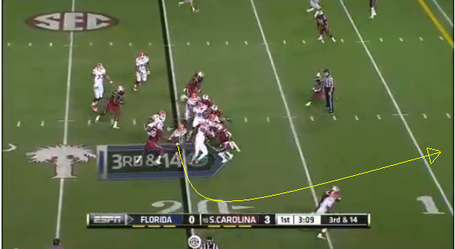 Taylor takes advantage of some great blocking up front by the offensive line and fullback Hunter Joyer to get to the outside and into the next level of the defense. Once he makes it here, it becomes a race to endzone and he'll need just one more block to take it into the house for the touchdown. 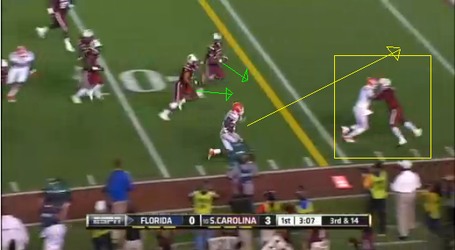 Taylor will get the lead block he needs from Quinton Dunbar (yellow square) and he does this all while staying in-bounds. Taylor then receives the contact from the two free defenders (green arrows) but will get the touchdown anyway. 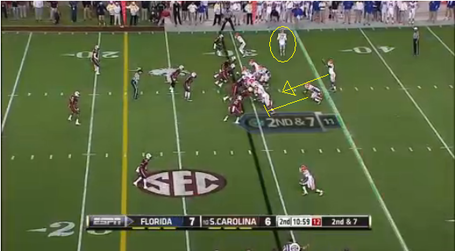 Yet another direct snap for Taylor as Mornhingweg (yellow circle) broke ranks again and headed out wide. This time though, Taylor will run to the open side of the field or at least attempt to do so and he'll only have one lead blocker. 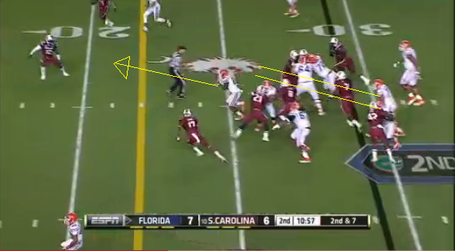 As Taylor finds the left side full, he changes course and finds a running lane that's opened up right up the middle. Once he's at the second level, the theme of breaking a tackle, making a guy miss and hoping for a block down the field continues. 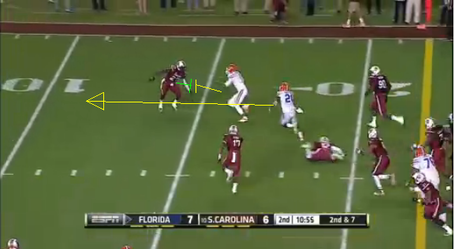 Taylor makes one key defender miss and gets the block from Dunbar again that he needed that will spring him for the touchdown. 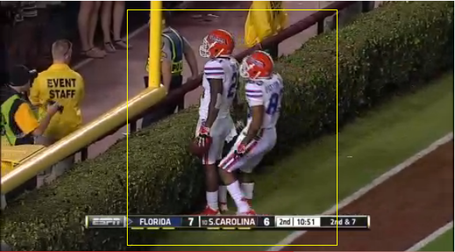 I just figured it was about time to show Taylor some love. I like his attitude and on a good note, at least he was showing it when the Gators were ahead!

Despite the Gators being unable to hold onto the lead or show any signs of life on the offensive side of the ball in the second half it was still a great performance by Taylor. I'm sure it's just a sign of good things to come and the future is bright for the Gators at the running back position.