Florida vs. South Carolina, Theater of Operations: Defense gives up some big plays

The defense gave up field goal after field goal on Saturday, but eventually they gave up a touchdown. It's tough to win games when the offense scores only 14 points.

Share All sharing options for: Florida vs. South Carolina, Theater of Operations: Defense gives up some big plays

It's tough to win football games when you score only 14 points. I don't care who you are. It's tough. The Florida Gators' defense on Saturday against the South Carolina Gamecocks gave up 19 points, which isn't bad, but it's still a little high from what we've come to expect.

The Gators defense held the Gamecocks offense to 377 total yards which seems like a lot, but if you take away some big plays, it was actually a pretty good performance. The Gamecocks finished with 213 yards passing (7.6 yards per pass) and 164 yards rushing (4.7 yards per rush). For comparison the Gators on Saturday finished with the same average passing the ball and a higher rush average.

Once again though, the Gators were behind in penalties and they lost the turnover battle.

Play No. 1: Ronald Powell gets a sack 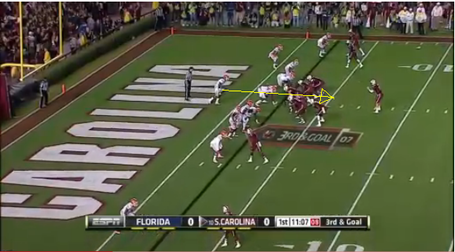 Powell is going to come on a blitz from right up the middle. It's a simple play and I like the play call here because it's something that you don't really expect. 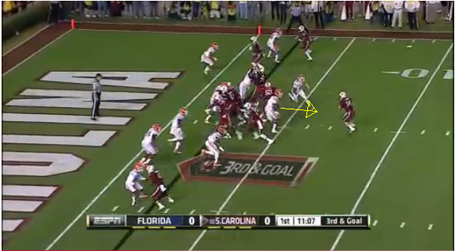 Right after the snap you can see that along with Powell, Michael Taylor is also in the backfield. Everybody else is doing their job as all the receivers and backs are covered. 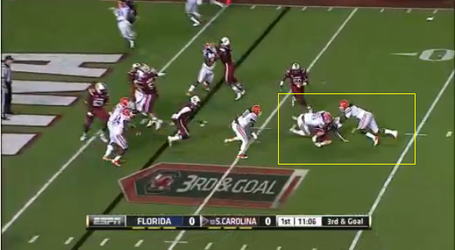 Both Powell and Taylor get to the quarterback at roughly the same time. There was some question as to whether or not Powell got some facemask or grabbed the collar of the jersey when making the tackle. I'm still not sure what exactly he grabbed, I'm still leaning towards the collar but it wasn't a penalty either way.

Play No. 2: Connor Shaw hits Bruce Ellington for a touchdown 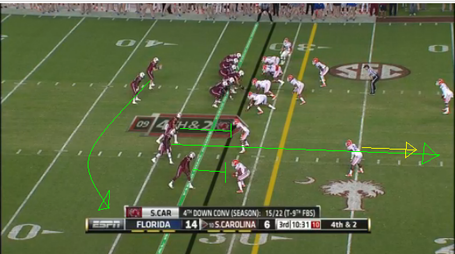 Steve Spurrier knows you don't win football games by kicking field goals. On 4th down, Shaw and Ellington, who is just going to run a deep route hook up for the score that changed the game. Shaw is going to roll out to his right. 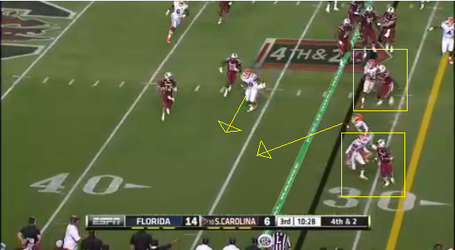 His only option is to throw it down the field into one on one coverage. 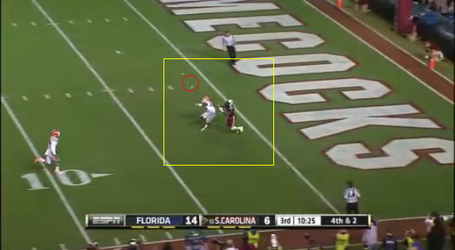 The coverage on the play isn't bad by Brian Poole at all. Only problem is that he gets turned around and falls trying to make a play on the ball.The result of which is a touchdown for the Gamecocks but there's not really any fault to go around. 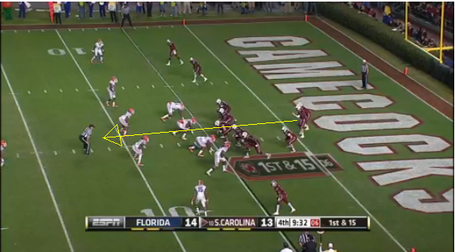 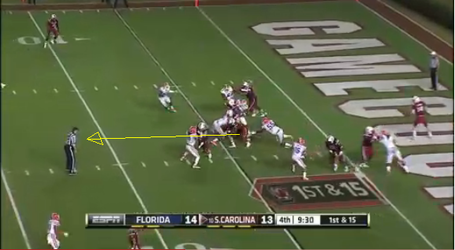 It looks like Carson is touched, but he actually isn't. 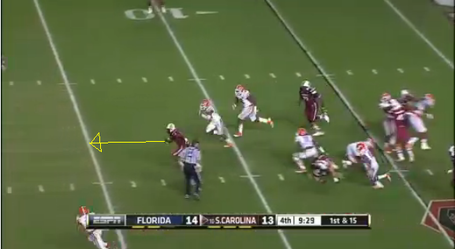 Once Carson makes it past the linebackers he's gone. He's eventually caught by Jaylen Watkins among others but it's too late.

It's tough to blame a defense that only gives up 19 points and the majority of them are field goals. Especially on the road against the No. 10 team in the country. However, the big plays you'd like to see have gone another way. That's something entirely different.