Now, I usually don't do this, but, uh, go ahead and break 'em off wit' a little previews of the remix...

Share All sharing options for: Florida vs. Georgia Southern, Theater of Operations: When Gator blocked Gator

Most of our regular readers know that FlaGators is our usual film analysis guy, but we just can't let the most infamous play of the 2013 Florida football season go by without some analysis, so I bring you this special edition of Theater of Operations, breaking down how two Gators came to block each other, and how it came to be an Internet sensation

The University of Florida pic.twitter.com/2mZexXnC2u

It's a solid tweet: The Twitter user probably watched the Breakfast With the Gators replay of Florida's loss to Georgia Southern, determined that red was the right color for the circle around two Gators blocking each other, and sent it out with a perfect caption: "The University of Florida." It really captures the moment of Florida being a punchline for losing to Georgia friggin' Southern, and shows the Gators in dire straits, using a smart play design to outfox the defense and gain a first down on a drive that would put Florida up 10-0 despite Quinton Dunbar blowing his blocking assignment.

Yes, this play worked. No, it wasn't a huge blunder. It just looks funny.

Let's watch it again, and break it down.

This video, from libgator, shows the play in full, and from an angle where you can see it develop. 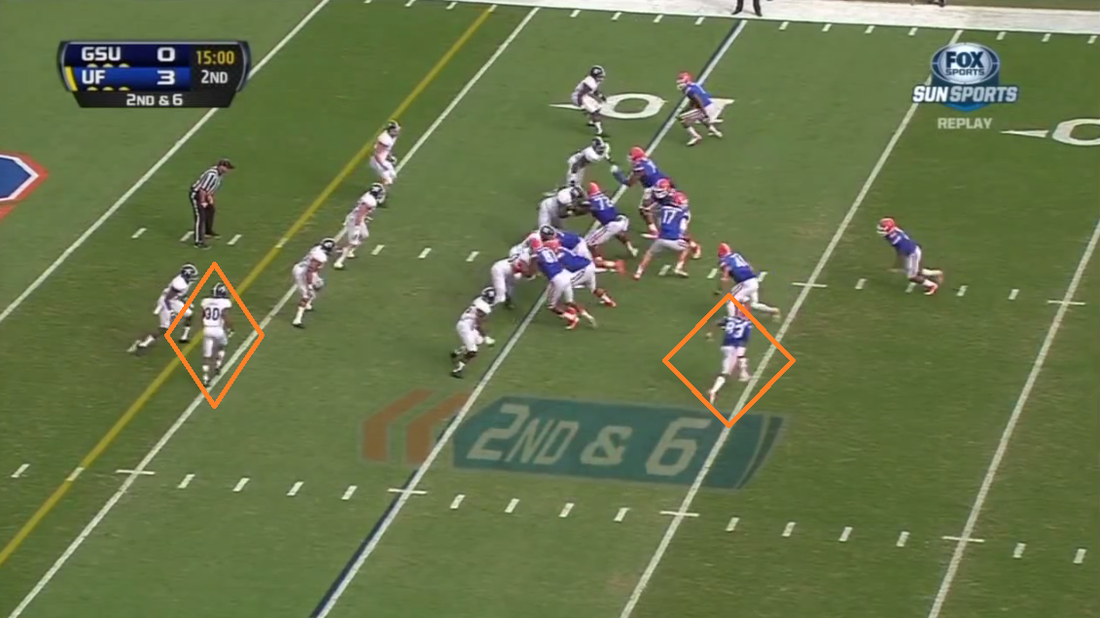 The play is a fake counter end-around, and you may find it familiar because Florida ran it a lot in 2012, and ripped Florida State with both this and the fake end-around counter — Mike Gillislee's 37-yard touchdown run came on a fake end-around counter. Solomon Patton (orange diamond) comes in motion before the play, and his man, Georgia Southern's Valdon Cooper, comes across the formation to get him. 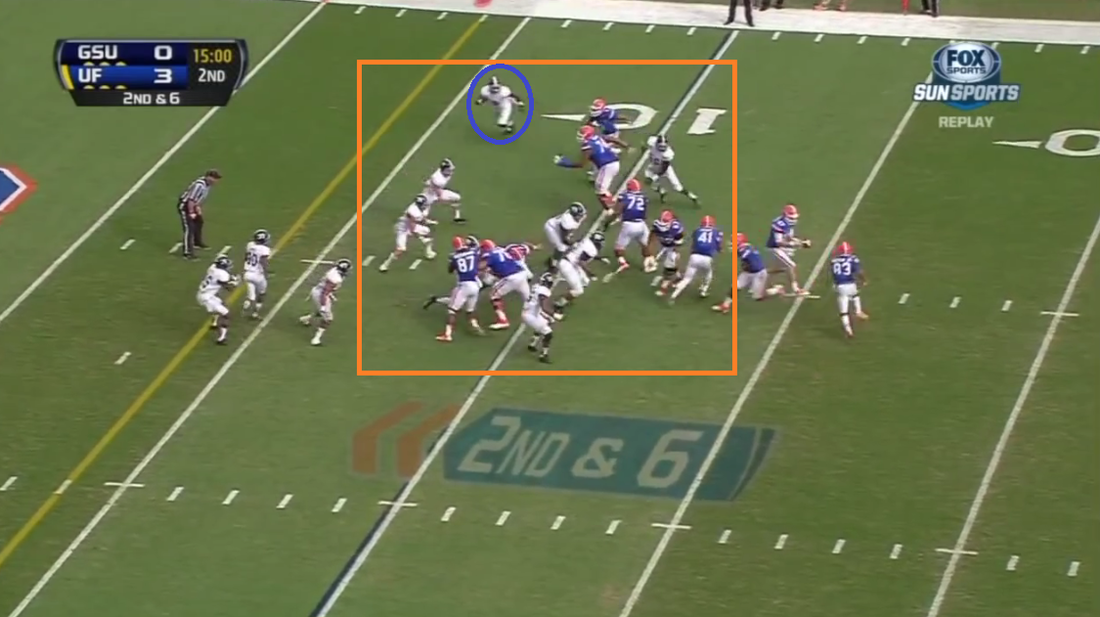 Florida's first problem is that its fake is almost too good. There are eight Eagles in that orange box, and all eight of them bite on the fake in some form or fashion. The player circled in blue is corner Darius Safford, Quinton Dunbar's most logical assignment in a man-blocking scheme, but Dunbar (circled in red) is looking at a bunch of players well out of position to make a play, and Mr. Blue actually gets himself well out of position without Dunbar even having to block him, as you'll see in the next shot. Jonotthan Harrison, circled in yellow, has finished his first block, and is pulling to the outside to clear room for Patton. 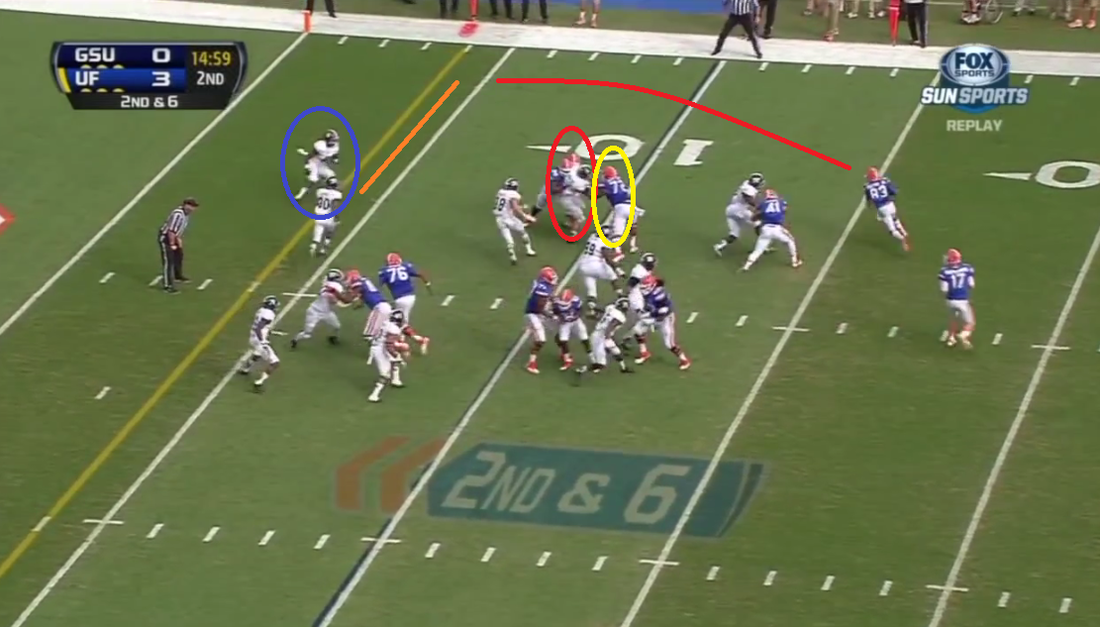 Here, Patton's got the ball and is going around end. Safford, hereafter known as Mr. Blue, is so far out of position that he has to try to turn instead of just shuffling back to his left, while Patton and his man are now racing to the same spot. Dunbar (in red) is stuck behind another block, but he's looking to engage someone, while Harrison (in yellow) is trying to work upfield to run interference for Patton. 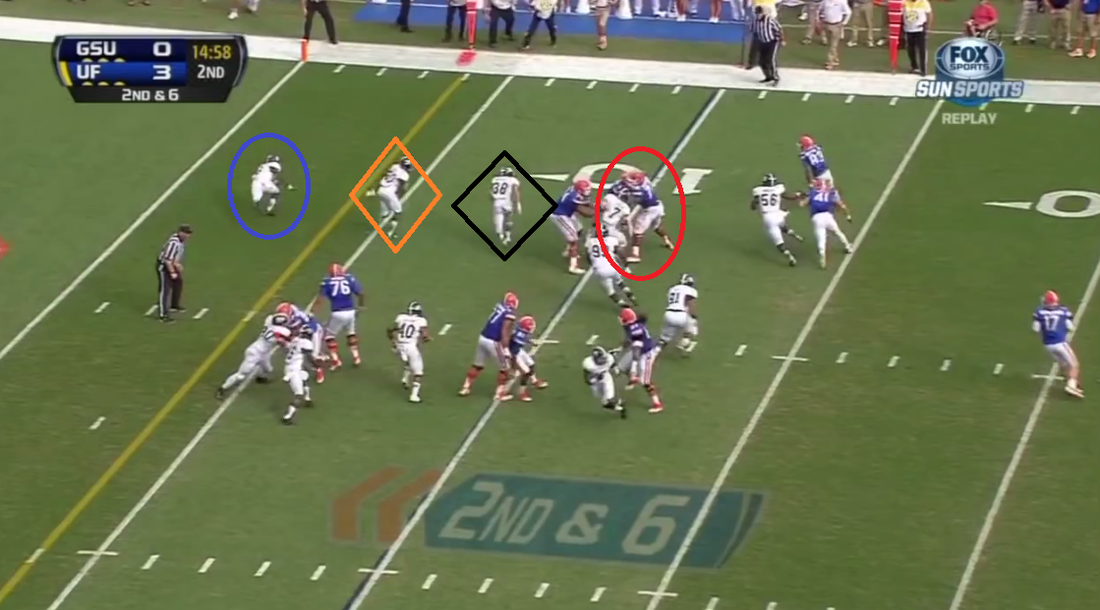 Moments later, Dunbar's turned back to try to seal the backside of the play, and run into Harrison, engaging him. This frees up Gainesville native and Buchholz High graduate Kyle Oehlbeck, in black, though his angle is awful, and gives Cooper a good shot at Patton if he can get the pursuit angle right. Patton is flying at this point, so it'll be tough, but Dunbar's decision to turn back toward the line instead of blocking upfield has already done its damage, freeing up two defenders, and it'll be up to Patton to use his speed and agility to get by them.

Meanwhile, Mr. Blue is in the process of tripping. He'll be face-down in a moment. 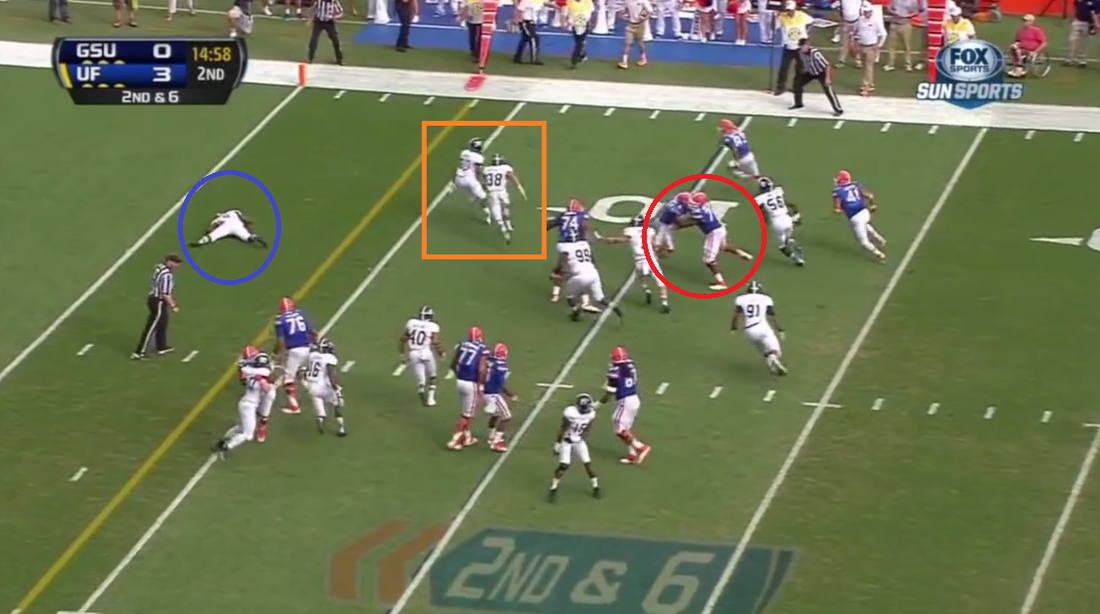 Here's a shot that's about as close to the original viral shot as possible. Dunbar and Harrison are tied up, in red, but Harrison appears to be standing his ground, while Dunbar tries to block an offensive lineman. Cooper and Oehlbeck are in the orange box, and Oehlbeck can clearly tell Patton's going to burn him, and has turned downfield, while Cooper's hesitated and turned just enough to give Patton more of the corner.

Mr. Blue has been brought down by the turf monster. 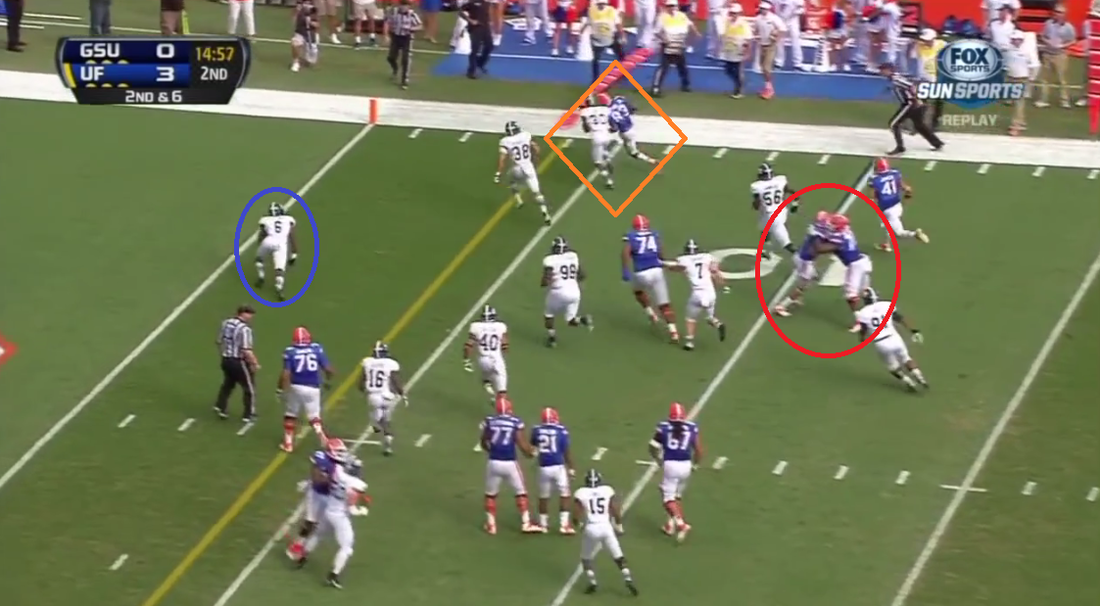 In this shot, at 14:57 on the game clock, Dunbar and Harrison are still tied up, but can tell they have done a dumb. Cooper's gotten to Patton, and though he's not in position to tackle him, the proximity of the sideline makes it easy to bump him out of bounds. Mr. Blue is valiantly trying to regain his feet. 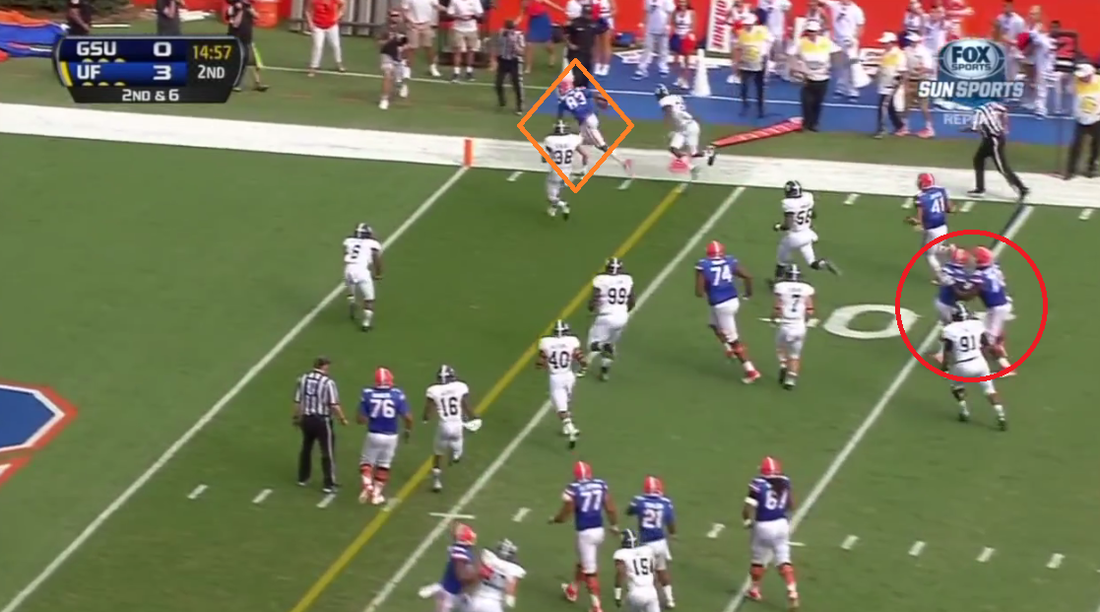 And in this final shot, Patton's out of bounds at the 3, having picked up a first down, and Dunbar and Harrison are both semi-engaged, but are watching the play. They know what they've done, surely.

The tweet caught fire late Sunday; someone texted it to me Sunday night.

Florida would go on to score on the drive, with Skyler Mornhinweg completing his first collegiate touchdown pass to Patton three plays later, but I'd argue the Gators made bigger errors on each of those next two plays than they did on Patton's end-around. The first and goal play was a run by Kelvin Taylor that included a badly missed block by Jon Halapio; second and goal was a play action pass to Hunter Joyer on the short side of the field from the right hash, not an ideal option for a passing touchdown.

Remember that, along with the ha-ha hilarity of this play, when Pease is not retained as Florida's offensive coordinator. Remember, too, that Florida did end up scoring on the drive, making this sort of irrelevant to the game. My eyes roll involuntary when the Internet Nelson Muntz laughs at virtually anything, but I'm at least happy that this, and not Florida being gouged repeatedly by Georgia Southern's option, is the lasting image of this game.

Most of all, though, remember that Florida put this play in its official all-access video of the game, with a slo-mo shot (it's at 3:00), likely without realizing how it opened up Dunbar and Harrison to giggles.