Florida vs. Georgia, Theater of Operations: Defense struggles too much out of the gate

Despite the offense finally showing some signs of life in the second half, it was the defensive breakdown in the first half that doomed the Florida Gators against the Georgia Bulldogs yesterday.

Share All sharing options for: Florida vs. Georgia, Theater of Operations: Defense struggles too much out of the gate

Despite shutting out the Georgia Bulldogs in the second half of yesterday's 23-20 loss, the Florida Gators defense should receive a lot of the blame for said loss. When your offense has struggled as much as the Gators' offense has struggled in the last month or so, giving up 14 points in the first six minutes or so of the game is unacceptable.

And that doesn't even tell the whole story.

Missed tackles, penalties and a general inability to start even remotely fast have plagued the Gators' defense all season and for the second game in a row it was their downfall.

Despite their best effort in the second half, coming back from 20 points down just probably isn't going to happen for the Gators this year. Despite missing two field goals, they almost did.

But because of the hole the defense left for the offense to emerge from, it wasn't to be. 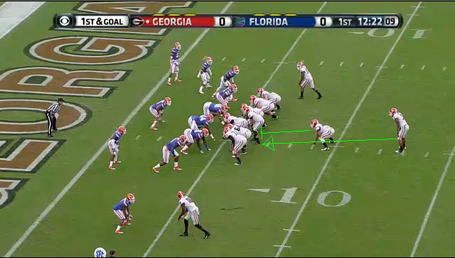 Gurley is just going to take the handoff and follow the fullback through the left side of the line. Antonio Morrison, who is playing in the middle of the field, is freed up to tackle Gurley on the play. 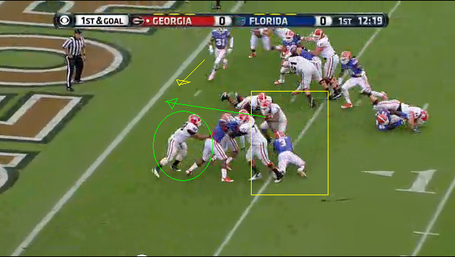 Despite the fullback (green circle) completely missing the block, Morrison will miss the tackle (a theme will develop of bad Morrison a little later) and Gurley will move forward towards the endzone. You'll notice that Cody Riggs is coming up to make the tackle, but a softer Riggs, perhaps because of his ejection last week, results in a touchdown.

But hey, that's what y'all want right? A softer safety. 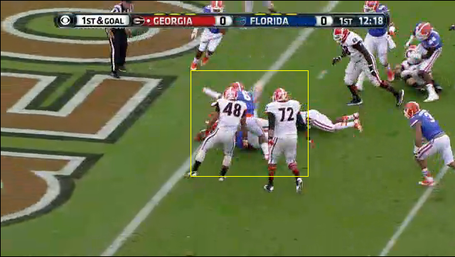 Just over the goal line for the touchdown. 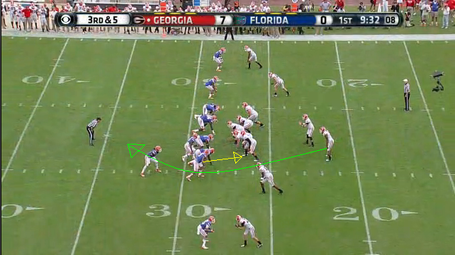 Morrison is at fault here again. He's assigned to act like he's coming on a blitz, but once Gurley heads out instead of blocking, he's supposed to jump back into coverage. It's a tough play, no doubt, because it requires a lot of guessing and a complete turnaround for a defender ... but this is about as badly played as you can get. 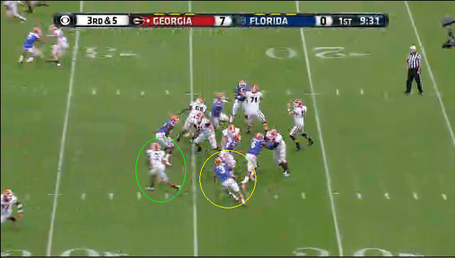 At my place of work, people like to say that when you say "oopsie" after a mistake, it makes it all better. 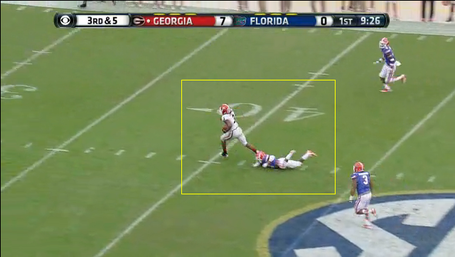 Down the field, Riggs swings and misses. 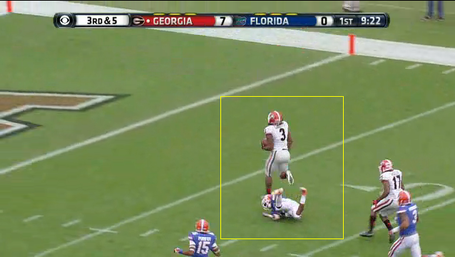 And after Riggs, Marcus Roberson does the same. At least Morrison ran the entire way down the field.

Play No. 3: Loucheiz Purifoy gets a safety 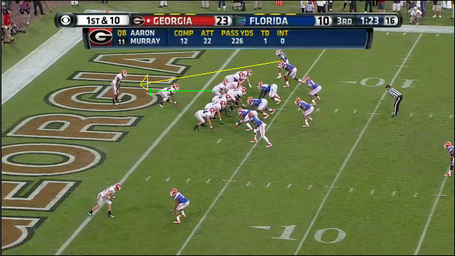 Purifoy has had some incredible luck making big plays this year, and this play is no different. How nobody accounts for him as he creeps up to the line for a blitz is mind-boggling. 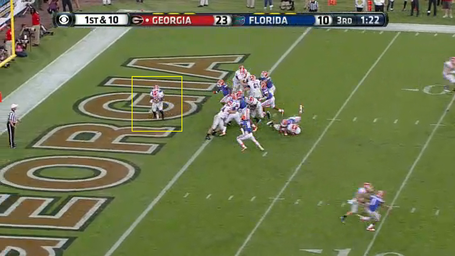 Also, look at the middle of the field for a moment: AN OPEN FIELD TACKLE ON GURLEY!

Despite the Gators' defense (and offense, more on that tomorrow though) coming alive in second half of the game, it was too little, too late. Can't fall behind like that early every time and expect to be okay.