Florida vs. Georgia, Theater of Operations: Gators begin to come back in second half

Following a safety that was profiled yesterday, the Florida Gators nearly came back to beat the Georgia Bulldogs on Saturday. Their attempt though fell short of total victory.

Share All sharing options for: Florida vs. Georgia, Theater of Operations: Gators begin to come back in second half

Mack Brown and Tyler Murphy both flew into the endzone on their touchdown runs as the Florida Gators nearly completed their biggest comeback in a long time. Their valiant efforts were for not though as the Gators' comeback fell three points short.

After getting within three, the Gators defense couldn't stop the Georgia Bulldog offense who remained on the field for the last eight minutes and change of the football game. Still though, much good can be taken away for the Gators, who showed life for the first time since early October.

Murphy finished the game with 174 yards passing on 29 attempts. While he never found the endzone through the air he didn't throw an interception either, so I guess that's a wash. The Gators are going to need more from him in the final month though if they expect to finish the regular season above .500.

Aside from Quinton Dunbar, who had 91 receiving yards on four catches, the Gators' receiving game was irrelevant. 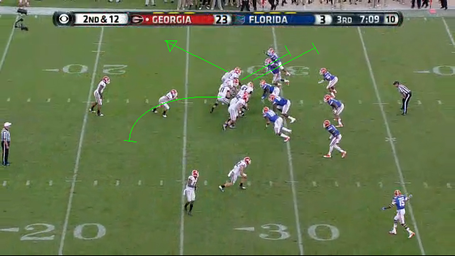 The play that changed the course and momentum of the game. Aaron Murray throws a lateral to his tight end, who drops it thinking it was a pass and Orr is there to capitalize. 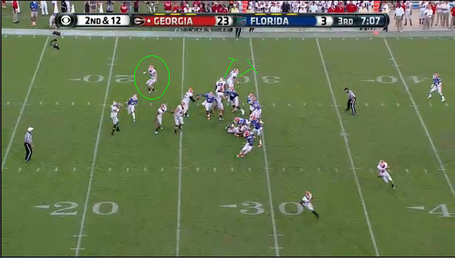 Note that if the receiver does in fact catch the ball, he's got blockers out in front and a lot of open space. 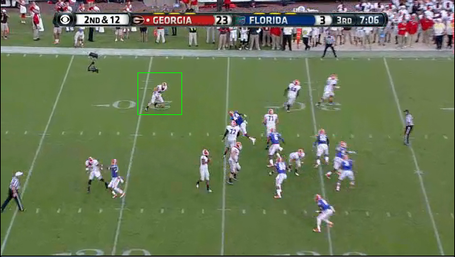 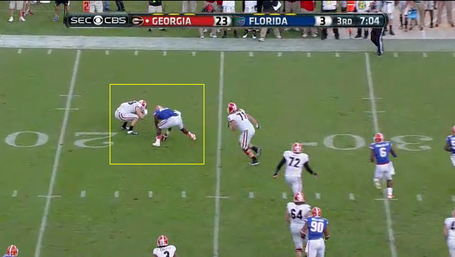 ... and then the sit. Orr is able to just simply walk over there and pick the ball up. 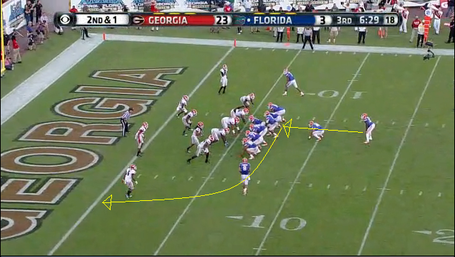 The plan here I believe is for Brown to take the handoff and run up the middle. That however isn't going to work because the Georgia defensive line gets such a great push that there isn't even anything that remotely resembles a running lane.

As a result, Brown is forced to bounce the play to the outside. 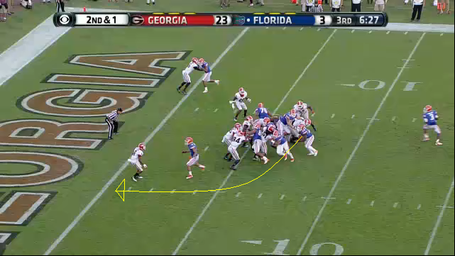 Nowhere to go up the middle. Brown also has plenty of blockers to the outside at this point as well. 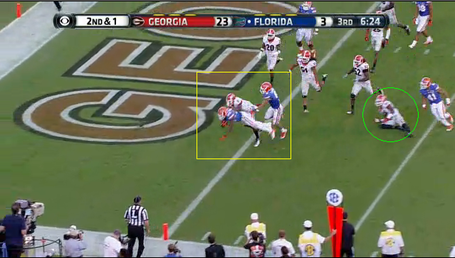 Brown eludes on defender (green circle) and then leaps into the endzone for a touchdown. 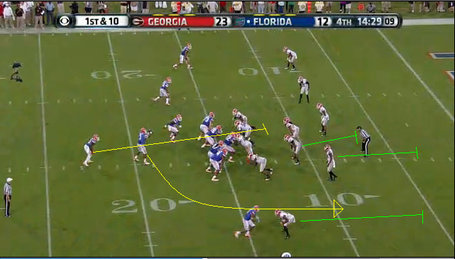 And finally, here is the read-option. Why have the Gators been holding back at all? Doesn't make any sense. 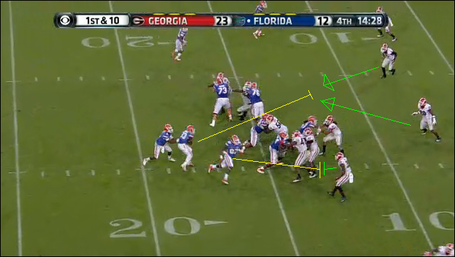 You can see that Murphy makes the correct decision in keeping the ball. Had Brown been given the ball he's going to have to deal with two defenders as he approaches the 15-yardline. Murphy meanwhile, has a lead blocker and lots of space to run down the field. 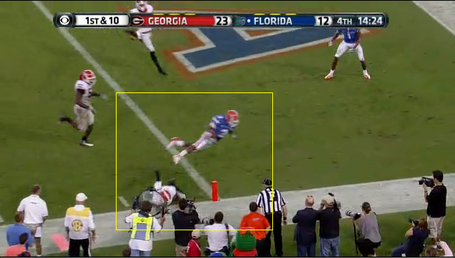 Murphy soars up and over the defender for the touchdown.

Unfortunately for the Gators, this comeback attempt fell just short. Were the two missed field goals to blame? How about the penalties that cost the Gators a couple of crucial first downs?

Either way a loss is a loss, but it was good to see the Gators actually give a damn for once.