In the first part of our video review, we'll look at some big plays by a Florida Gators defense that came to play early but in the end faltered as the Florida State Seminoles offense got going.

Share All sharing options for: Florida vs. Florida State, Theater of Operations: Defense steps up early, then falls apart

One of the strengths of the Florida Gators defense throughout the season has been their pass coverage. But if yesterday was any indication, the Florida State Seminoles don't care that the Gators have three NFL-level corners in Loucheiz Purifoy, Marcus Roberson and Vernon Hargreaves III.

Even though Purifoy has played poorly quite a bit this season, and Roberson has been hurt and has missed quite a few games (who on the Gators hasn't been, this year?), Jameis Winston and the Seminole receivers getting loose for 327 yards through the air shouldn't have happened.

Kelvin Benjamin was the unquestioned star for the Seminoles, as he had 212 yards receiving and three touchdowns. Tight end Nick O'Leary had 52 yards as the Seminoles' second option throughout, and all his receptions came in big moments when the Florida defense was bending but not breaking.

But the Seminoles have one of the best big-play offenses in the entire country, if not the best. And the Gators' defense is missing quite a few important pieces. Over the past few weeks, it has only been a matter of time before the defense broke.

Yesterday, that happened halfway through the second quarter. 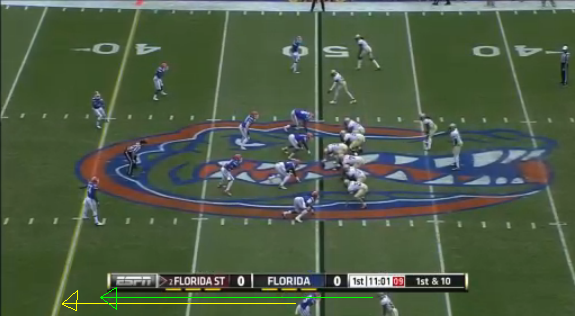 Purifoy will be covering Rashad Greene on the play and it's going to just be a go-route. Purifoy will be with him all the way and will even have inside coverage when the ball arrives. 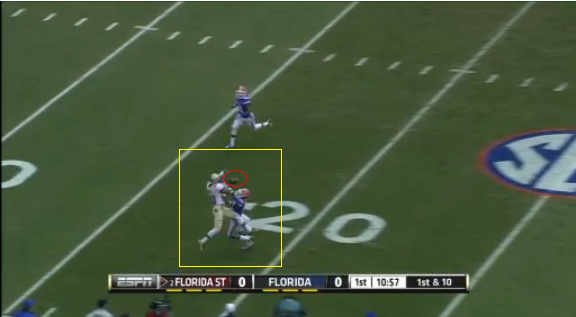 As the ball arrives, one could say that Purifoy may have gotten there a bit early and pushed Greene a little as he goes up for the pass. With both players fighting for the ball, if anything was called, it would likely have been on Purifoy, because he didn't turn around to look to see where the ball was. 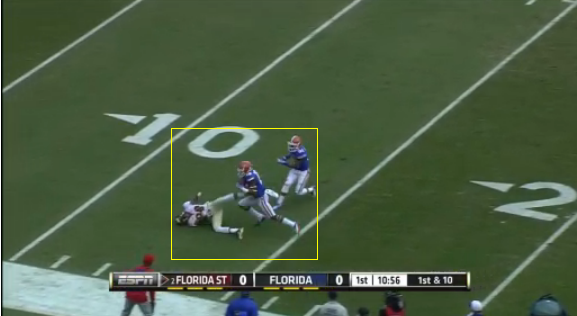 As Greene falls down, Purifoy completes the catch for the interception. Nobody is doubting Purifoy's big-play ability; it's the general fundamentals of being a cornerback that have had Gators fans questioning Purifoy's ability to play corner all season long.

Hopefully, things work out for him at the next level.

Play No. 2: Neiron Ball gets a sack 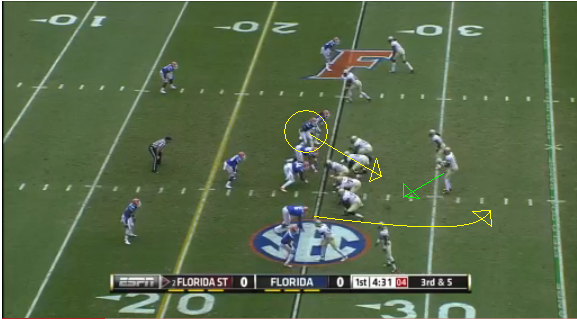 Ball is going to come in on a blitz, while pressure by Dante Fowler, Jr. forces Winston to move up into the pocket, right into Ball's waiting arms. 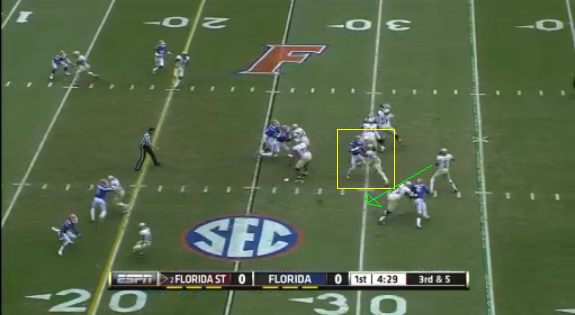 Ball is engaged with his blocker (yellow square) as Winston scans the field, but the coverage by the Gators' defense prevents him from throwing the ball. Meanwhile, Fowler is on his way to Winston. Winston will try and scramble away from the pressure. 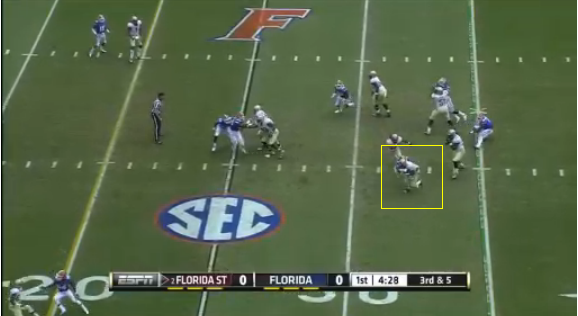 Ball beats the block just as Winston takes off to avoid Fowler, and will need no help in stopping Winston's scramble as he tackles Winston just beyond the 30. The Seminoles would end up settling for a field goal.

Play No. 3: Benjamin burns Purifoy for a touchdown 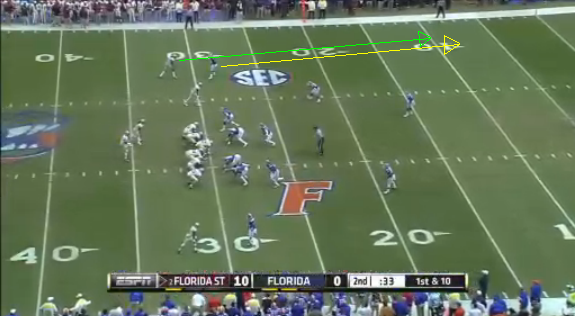 Same route as the play profiled above, only this time Benjamin will get the better of Purifoy. He'll do that with the help of a little extracurricular activity, though. 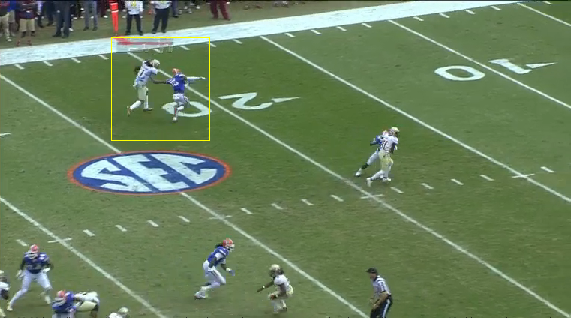 It's easy to create space when you throw the defensive back a few yards back behind you. 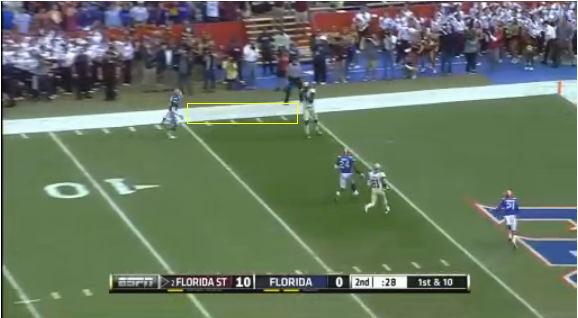 Space created, and another touchdown for the Seminoles.

This touchdown pretty much sealed the game for the Seminoles, as there would be no coming back. We'll get to their first touchdown in tomorrow morning's video recap, but this play was requested by numerous people.

All in all, aside from a few plays here and there, the Gators are going to struggle with plays to be proud of.