Florida vs. Florida State, Theater of Operations: The Gators do some good on offense

In the final Theater of Operations of the year, we'll look at the final Trey Burton wildcat and a Hunter Joyer touchdown against Florida State.

Share All sharing options for: Florida vs. Florida State, Theater of Operations: The Gators do some good on offense

The Florida Gators managed just under 200 yards of offense against the Florida State Seminoles' defense on Saturday night and they had to know that going into it, that wasn't going to get the job done. When you don't even get to eighty yards rushing, on top of converting 1-of-11 third down tries, you're not going to win very many football games.

I don't care who you play.

But through all of that, there was some good. As Trey Burton's career came to an end on a fifty yard run and Hunter Joyer scored on a nice touchdown catch, freshman receiver Ahmad Fulwood made some nice catches and the Gators ran a much needed screen pass.

I'm pretty sure that it was their third screen pass all season. For an offense that pledged to be a pro-style offense, running less than five screen passes in a twelve game season is a little low.

And I think I'm only half kidding on that number. They probably did run more than three, but it can't be all that much higher. 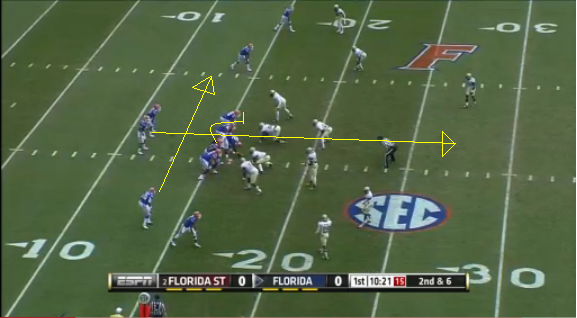 Looking back on it, I think I'm going to miss the Burton wildcat just a little bit. On this one, Burton will keep it from the motion man like he always does and head up the field. Jon Halapio is going to pull from his guard spot on the right side and get a key block up the middle. 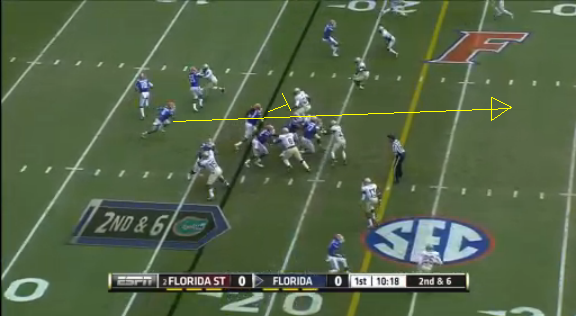 Once Halapio gets his man, Burton will take off up the middle. He'll go pretty much untouched through the line and get to the second level very easily. 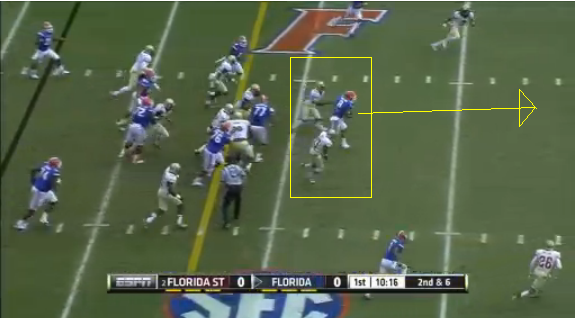 Burton uses his speed to get past the last two Seminole defenders before he heads up the middle for the bulk of his yards. I'm going to miss Burton's speed and his hands (almost always seemed to catch the ball when targeted) but his decision making throughout his career leaves much to be desired. 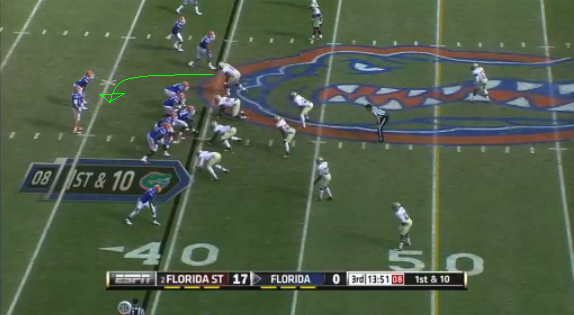 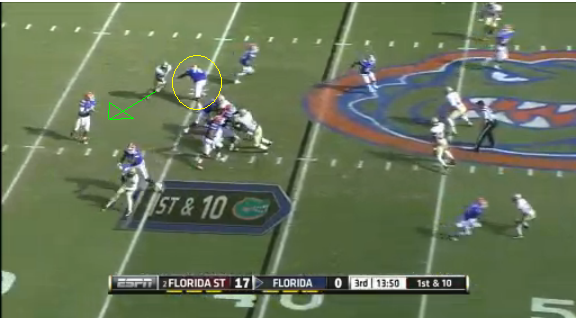 After throwing Garcia aside, Edwards Jr. is heading straight for Mornhinweg and Mornhinweg has no idea that he's on his way. That's one of the things that Mornhinweg doesn't have and that is pocket awareness. He'll maybe get that in time, but it's hard to ever see him taking a snap again for the Gators. 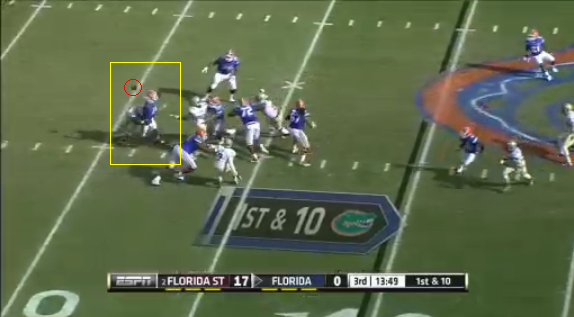 When Edwards Jr. hits Mornhinweg, the ball comes out before Mornhinweg can get the throw off. And because of all that, it was correctly ruled a fumble. The Seminoles would recover the ball. 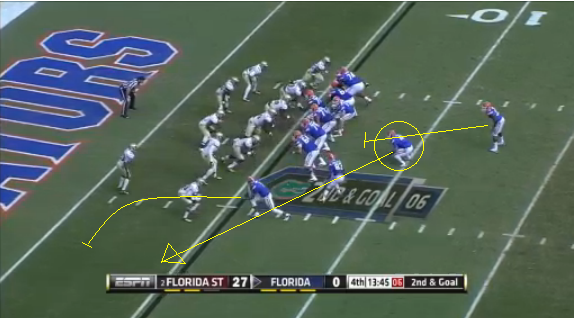 We're gonna end this year of video reviews with a touchdown damn it.

The play call is a play-action and Joyer (yellow circle) is going to head out into the flat. He'll be wide open as he goes unaccounted for by the Seminole defense. 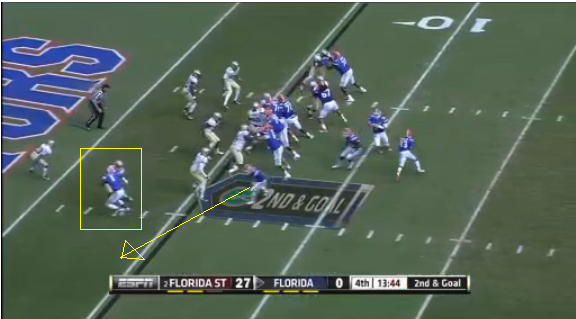 Once the play-action to Kelvin Taylor is over with, you can see that Mornhinweg is only looking for Joyer. It seems that by the routes run that Joyer was the only option. I guess when the offense is simple, this is what you get. 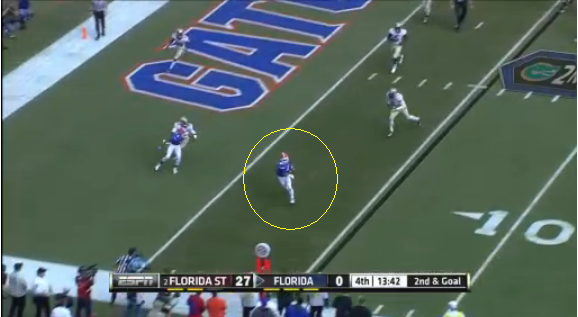 A good throw by Mornhinweg and a wide open Joyer results in the lone score for the Gators against the Seminoles on Saturday.

Once again, it was a pleasure doing these posts for y'all. I'm just sorry that the year wasn't the best, but hey, we've got no where to go but up.