How should we react to Jameis Winston not being charged?

The slow and agonizing process of deciding whether to charge Jameis Winston with sexual battery is almost over, and Winston appears unlikely to face charges. Now what?

Share All sharing options for: How should we react to Jameis Winston not being charged?

Tallahassee-based Florida State Attorney Willie Meggs will be announcing his decision on whether or not to charge Jameis Winston with sexual battery at 2 p.m. today. And Winston's not going to be charged. (Update: Winston has officially not been charged.)

Bud Elliott lays out why it would be a shock if Winston is charged at Tomahawk Nation, explaining, with the advantage of having reviewed the unredacted police report from the night in December 2012 when the alleged rape occurred, that the evidence against Winston is too flimsy, and the alleged victim's story too inconsistent, for a charge to result in conviction in court.

And I believe and trust Bud, who has been all over this story from the beginning, and believe and trust his judgment here. The evidence is likely not strong enough to merit a conviction, which suggests Winston won't be charged — and the unusual step of calling a mid-afternoon press conference with no apparent effort made to take Winston into custody suggests both that Meggs will not be charging Winston, and will be taking the time to make some significant address to the public.

It's that last, unusual wrinkle — that this case of alleged rape is so high-profile that a state attorney apparently feels the need to defend or clarify his decision — that really puts into perspective what will happen today when Winston is not charged.

A decision not to charge Winston means he'll be able to continue his life more or less as it was prior to the allegation being made public. He won't be suspended from the Florida State football team, will play against Duke on Saturday in the ACC Championship Game, will win the Heisman Trophy, and will likely help FSU win the final BCS National Championship Game in January. Winston will remain the hero of his own story, and of this surprisingly abrupt FSU summitting of the national college football landscape. He will, in most respects, be exonerated of one of the most cruel crimes humans can commit.

But he won't be fully exonerated in the public eye. There will be many questions left for people who have not followed this case closely. What actually happened on the night in question? Why did an investigation into an alleged rape occurring in December 2012 take nearly a year to produce a decision to charge or not charge? What role did Florida State have in protecting one of its players, or supporting the fellow student accusing him of rape? How and why did this entire saga become public?

I think I know some of the answers to those questions, because I've spoken to Bud repeatedly, and I'm satisfied with the thoroughness of the investigation conducted by Meggs' office over the past month as a stakeholder in the justice system of the state of Florida, but I don't know the answers to all of them — and I doubt I ever will.

I don't think I'm entitled to knowing all of those answers, either, and definitely don't think I'm entitled to knowing what goes on behind closed doors between consenting adults. In this case, I have to rely on the people who are legally entitled to know — police officers and investigators who are privy to more and better infromation than I have — and hope that they made the right decisions. I think they did, which is reassuring, as there is theoretically no travesty of injustice — a rape not being prosecuted, or a false accusation of rape being prosecuted — in Meggs' decision to charge or not charge.

But I still have questions and concerns, and I think we all should. My trust that police did a good job in investigating this alleged rape does not necessarily mean that I trust that their initial reaction was fully appropriate — I think this could probably have been resolved far more quickly and quietly earlier in the life of the investigation. And my belief that Winston's accuser made a false accusation does not necessarily mean that I think she should be prosecuted for it — especially because I'm almost certain that she's suffered significantly as a result of making the accusation, regardless of the veracity.

Rape shield laws, like the one Florida has (read s. 794.03), are meant to protect victims from having their sexuality put on trial and their identity aired to the public. Sadly, in a high-profile case such as this one, and with the tools available to the public in 2013, that is nearly impossible to prevent, and the alleged victim's name has been made public. Her motives have been questioned, her character impugned, and her person threatened. Searching Twitter for her name — which I'm not sharing for obvious reasons, and which I will ban any Alligator Army commenter for sharing — reveals dozens of ugly tweets doing one or more of those three things.

And that last bit is a primary reason rape is so difficult for victims to handle, and is, sadly, only getting harder in our increasingly interconnected society. Apart from the obvious physical and emotional trauma of the act, victims often find themselves facing the prospect of much more trauma over the course of an investigation; reacting with skepticism or worse to rape allegations and the people who make them makes it that much harder for rape victims to go through with the decision to pursue charges.

Not every alleged or actual rape is as high-profile as this one, but high-profile cases such as this one set the template: People will remember that a young woman had to wait a year to have her accusation fully investigated, without knowing all the mitigating circumstances that prolonged the investigation, and that the woman's privacy was repeatedly violated. And that might, unhappily, dissuade victims from coming to police with their reports in the future.

While it's the prerogative of every rape victim to handle the decision to go to the police on an individual basis — in some cases, and especially in cases with little evidence, the victim's informed and rational decision is to not do so, and should be respected — the option of pressing charges should be available to every victim, and available without the trauma that often comes with it. Victims of crime should not have to worry about the ramifications of pursuing full justice, and yet rape victims nearly always must factor in the potential for public shaming, which is an ugly truth about how we respond to rape.

And while the accuser's public shaming by some is far more lamentable, and likely has more repurcussions for other future victims of rape, Winston has also been treated unfairly over the last month. His presumption of innocence was discarded by many; his life, far more public than his accuser's, was repeatedly probed for salaciousness, resulting in a BB gun skirmish and an instance of stealing cents' worth of soda from a Burger King with a cup intended for water — incidents that would be amusing anecdotes for the average college student — being held up as potential character flaws.

Previously: How do we react to the investigation? 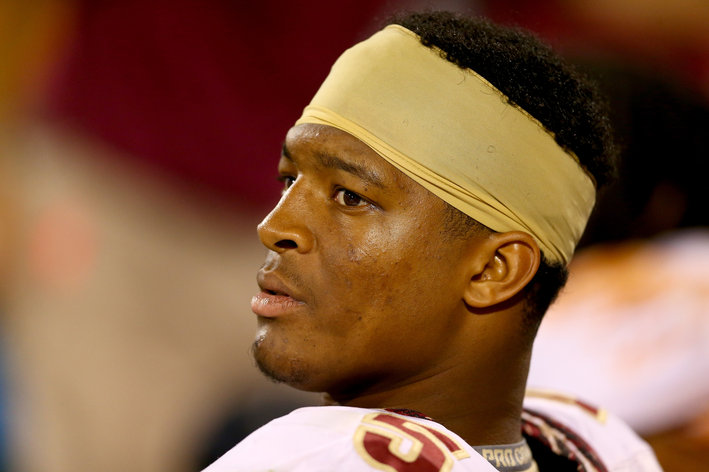 "It is impossible to make rape funny, and unwise to try."

The allegation against him was used to tar Florida State, too, and that's a shame. Too many people turned rape into a punchline in discussing this case, especially at last Saturday's Florida-FSU game, and that's something The Independent Florida Alligator's editoral board argued vehemently and effectively against:

In this case, a stadium full of students shamed another university because one individual came forward and reported rape to the police. This sends a damaging message to women that victim-blaming is inevitable and could discourage them from coming forward with their stories of rape and sexual assault — crimes that are grossly underreported in the first place.

To the students who participated and were complicit in this behavior, you should take a close look at yourselves. It’s very likely some of the women around you in the stadium were victims of rape and sexual assault, yet you decided to make it a joke under the weak guise of football rivalry.

UF prides itself on being a progressive institution that makes enormous strides in academia and research, but these malicious actions hurt the brand UF has worked to establish and diminishes the value of a UF degree. It further adds to a victim-blaming culture in response to reports of rape, and it sends a message to women that silence is better than tarnishing a university’s image.

What we can say for certain about Jameis Winston not facing charges is that he will not be facing charges, because the person in charge of determining whether he should did not find sufficient evidence to bring those charges. Drawing virtually any other conclusion requires conjecture.

But we can also argue that Winston will forever carry the mark of having been accused of rape, and that the way the invesitgation was handled assured that. We can argue that the way the investigation was handled also makes it clear that protocols for rape cases ought to be established and strenuously followed, so as to prevent some of the same errors from happening again.

And we can certainly argue that we, the people, need to do better, especially by making rape allegations less harrowing to report and have investigated through better policing of our sentiments to respect both alleged victims and people presumed innocent before proven guilty.

The way this case has played out makes the decision not to charge almost an afterthought; this feels more like the end to a dark interlude for sports, and for society, than a moment to rejoice. Jameis Winston did not do something worth prosecution, in the eyes of the law, and that is a good thing; I am happy that he apparently did not rape someone.

But many other bad things happened on the way to the courthouse steps where this will be announced, and they matter, too.

Learning lessons from this, and applying them whenever we can, is our best reaction. And I hope it will be our actual reaction, though I fear it won't be.

Next Up In College Football