Finally, some good news for Florida on the injury front.

Florida forwards Will Yeguete and Casey Prather and guard Michael Frazier have all been cleared to practice with the Gators on Thursday, according to GatorZone's Chris Harry.

Yeguete has been out since re-aggravating a knee injury in the first minute of Florida's loss at Arkansas on February 5, and having surgery on February 8 to remove "floating bodies" from the knee. He was originally projected to miss four to six weeks while recovering from the surgery, but would miss just 20 days if he does, indeed, practice on Thursday. Florida is 4-3 since Yeguete's injury.

ESPN's Shannon Spake reported during Tuesday's broadcast of Florida's 64-58 loss to Tennessee that Yeguete was "expected" to return on Saturday against Alabama.

Frazier, who missed Tuesday's loss with a concussion, was "expected" to return against Alabama as of Sunday.

Prather, who left Tuesday's game late in the second half after a collision produced a facial laceration left him GAZING AT HIS OWN BLOOD... 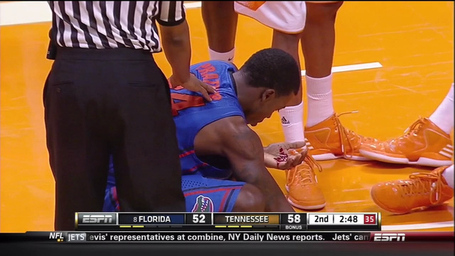 ...apparently does not have the concussion that Florida coach Billy Donovan speculated he could have in postgame comments on Tuesday.

With all three players back for the Gators, it's likely we will see a Florida team more like the one that stormed to an 18-2 record before losing Yeguete. At least, that's a damn healthy hope to have.