Florida, Kansas to meet in Gainesville as part of 2013 SEC-Big 12 Challenge

Florida will bring one of college basketball's blue-blood programs to Gainesville in 2013-14, Alligator Army can report.

Share All sharing options for: Florida, Kansas to meet in Gainesville as part of 2013 SEC-Big 12 Challenge

Update, May 2: Kansas has released its non-conference schedule, confirming the Jayhawks will play at Florida on December 10. Original post follows.

Barring a last-minute snag, Florida will play Kansas at home during its non-conference schedule for 2013-14 as part of the SEC-Big 12 Challenge, a source has told Alligator Army.

This shouldn't come as a shock: I was reading the same tea leaves that Jason Lieser did for The Palm Beach Post about the Gators scheduling a "historic powerhouse" from the Big 12 and had concluded that there's no other historic powerhouse in the Big 12, even though Andy Katz suggested in December 2012 that Florida and Kansas couldn't work out a date.

And it just doesn't make sense to advertise a game against any other Big 12 team as one against a "historic powerhouse," as Florida has, repeatedly, in marketing materials. 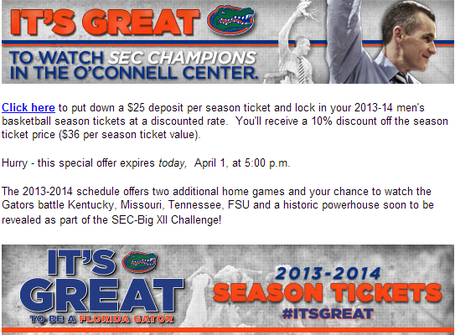 And there are leaked SEC-Big 12 Challenge matchups that point to a Florida-Kansas pairing, and there was a note in Katz' same December post about how Kentucky couldn't work out a date with Kansas, either, and it just makes sense for Florida to spend 2013-14 jamming as much good basketball into the O'Connell Center as possible.

As Lieser points out, Florida's interested in doing a big-budget renovation in the O'Connell Center, and it's going to bleed into a non-conference schedule at some point, and it's looking more and more like that will happen in 2014 at the earliest. Loading up on good home games now makes season tickets more attractive to fans, and may help grow Florida's base substantially, which would help Florida survive leaner years in which fewer games could be played at home: If Gators fans pay up for a slate of premium opponents in 2013-14, they might be more inclined to keep cheaper tickets for a smaller number of games in 2014-15 if the O'Dome is out of commission.

So Florida playing Kansas at home in 2013 as part of a home-and-home makes a lot of sense from a logistical standpoint, and that's part of why it's going to happen, I'm told, unless something derails these negotiations at the 11th hour.

But it looks even better from the perspective of someone concerned with the national perception of Florida, and that's why I think this is a slam dunk (that's a basketball term) for Billy Donovan and Jeremy Foley.

First, and most importantly, this aligns the premier program from the Big 12 — Kansas has won the last 72 Big 12 titles, give or take — with one of two teams that can be legitimately called premier teams in the SEC. I don't know if that will do much in 2013-14, when Kentucky's constellation of talent, with or without Andrew Wiggins, will earn many deserved mentions for UK as "the most talented team in college basketball history," but taken as part of the history of Florida basketball, it can't hurt.

Florida is currently unequivocally among the elite in the sport, and will be at least until Billy Donovan leaves, because a future Hall of Fame coach with multiple national titles makes you elite, but Florida wanting to show and prove that on a yearly basis with marquee non-conference games is smart.

Additionally, this is proof that Florida is making sure to add rigor to its non-conference slate to avoid the perils of 2007-08 and 2008-09. In those years, and to some extent in 2010-11, Florida cruised through its non-conference schedule, but earned no quality wins. That problem has been rectified: I wrote in 2011 that the Gators' very tough 2011-12 non-conference schedule was one of the best in college basketball, and the Gators have only stepped it up in the two years since. Florida's top three foes in 2011-12 were Ohio State, Syracuse, and a down Arizona; in 2012-13, they were Marquette, Wisconsin, and an up Arizona.

This year, Kansas likely effectively replaces Marquette, Florida will almost certainly travel to Wisconsin, the Gators go to the Jimmy V Classic in New York, and there's still more, as Chris Harry reported two weeks ago that "UF is working to secure a new home-and-home contract with several other power-conference teams," which "will start on the road this fall."

Add in that Florida State has a very good chance of landing Andrew Wiggins, and the Gators will likely see four ranked teams and the No. 1 pick in the 2014 NBA Draft before the calendar year of 2013 is over. And playing all these teams is a no-lose situation for Florida: Either the Gators win and have great quality wins that come in handy in March or they lose and don't get penalized much for sticking their necks out and playing big teams.

It's a luxury — one afforded by a rich athletic department that doesn't need a slew of guarantee games at home, a coach that doesn't need to prove anything, a packed roster that allows that coach to schedule however he wants, and a conference that both provides some of the riches to UF and provides chances for big wins in conference play — but it's a massively valuable one that only about 20 schools nationally have.

Finally, the coolest thing about this for my money is that Florida's going to play home games against two 2,000-win programs in the same year, something that no school has ever done before in the history of college basketball.

That distinction won't be Florida's alone all year, because Duke joined Kentucky, North Carolina, and Kansas on that plateau in the 2013 NCAA Tournament, meaning that any ACC team that sees both Duke and UNC at home will also have it. And there's a very good chance those ACC schools will get it before Florida does, with Florida likely getting a March home game against Kentucky after playing the Wildcats at Rupp in March this season. But Florida likely has a better chance of winning those two games than any other ACC team, and Florida's obviously doing a little more work to secure it by scheduling Kansas.

Florida also won't be the first team to play both Kansas and Kentucky at home in one year: Tennessee, at least, did that in 2009-10, though Kansas was two months from having 2,000 wins at that point. The Vols lost to Kansas and beat Kentucky in those games, though, so Florida has room to improve on the Creamsicle-colored bunch from the Smokies, as usual.

In any case, this is a huge coup for the Gators.

What do you think of Florida playing Kansas? Would it make you more interested in coughing up money for season tickets, or making a trip to Gainesville for a mid-week game? I'll be around in the comments.