Three Gators teams moved on in NCAA play over the weekend, but the one team that lost may have taken the biggest blow.

The Weekend Review runs down Florida's sporting successes and failures in the non-football, non-men's basketball, non-track sports on crowded fall and spring weekends. If you have a club sport or other note to include in the Weekend Review, hit @AlligatorArmy.

Another year, another trip to the Final Four. It's getting to be a familiar road for the Florida women's tennis team.

Florida's wins on Friday over Duke and Sunday over California produced the Gators' fourth straight trip to a national semifinal, and demonstrated two different great things about this team. On Friday, it was Florida's ability to close out an overmatched foe that stood out, as the Gators won a match aided by forfeits in both doubles and singles in a little over two hours; on Sunday, Florida's depth allowed it to top a Cal team that played quite well, with Lauren Embree's expected singles win being paired with singles victories by No. 5 player Olivia Janowicz and No. 6 player Caroline Hitimana that helped stave off a Golden Bears squad that won two singles matches of its own.

Florida's Monday match with Stanford may be a little different. But it could be the best match of the entire NCAA Tournament.

Stanford's the No. 12-seeded team in the NCAA Tournament, but, as usual, the Cardinal have talent up and down their roster, and will be in great position to push the Gators, who they hold a 3-2 advantage over since 2010. (Florida is 101-4 against the rest of collegiate tennis.) The No. 8-ranked doubles team of Kristie Ahn and Nicole Gibbs has a win over the No. 3 doubles team in the country and a game 8-5 loss to the No. 1 doubles team in the country in the last three days, and Stanford scored wins in No. 2 through No. 5 singles over a very good Georgia team to come back from losing the doubles point on Sunday.

Florida went 2-0 this season against Georgia, with a 4-0 win in the SEC Tournament, and scored a 4-2 victory over Stanford in Gainesville in February, so the Gators have had success against both Stanford and the team it dispatched on Sunday. But the Gators have just one nationally ranked doubles team (Embree and Sofie Oyen) to Stanford's two, and though Florida has nationally ranked players at every singles position, the Gators will have the lower-ranked player in two of the six singles matches, and could have had the lower-ranked player in three, depending on how Florida coach Roland Thornqvist and Stanford coach Lele Forood set their lineups.

Florida's Final Four match against Stanford could be the best of the entire NCAA Tournament.

Embree will be the higher-ranked player in her match against No. 13 Nicole Gibbs, as the No. 1 women's singles player in the country always is, and whomever plays No. 6 singles for Florida (likely Caroline Hitimana) will face unranked Natalie Dillon. But Oyen is No. 17, just a smidgeon below No. 14 Krista Hardebeck, who has been playing No. 3 singles for the Cardinal, and No. 51 Alexandra Cercone will be outranked by either Hardebeck or No. 25 Nicole Ahn. Stanford could also have matched No. 92 Ellen Tsay against No. 89 Brianna Morgan, producing a closer matchup (in rankings terms) than Tsay vs. No. 123 Olivia Janowicz, and neutralizing Florida's ability to get a cheap point from Morgan, who is 18-1 on the season in dual-match singles play.

Of course, Stanford and Florida know full well that rankings don't guarantee wins: The Cardinal scored a quarterfinal upset of USC that saw an upset win over the No. 2 player in the country more than cancelled out by losses in No. 2 and No. 3 singles, including an upset of Hardebeck (who is 1-1 against both Oyen and Cercone in the 2012-13 season, and lost to Cercone in the teams' dual match), and have upset higher-ranked USC and Georgia teams in their Final Four run, while Florida has gone 1-1 as the higher-ranked team and 1-0 as the lower-ranked outfit in NCAA finals since 2010.

And then there's the other reality of Florida-Stanford matches: They're never boring, and never go quite like you expect, as five matches with none closer than 5-2 since 2010 indicates. If you have any passing interest in women's tennis at all, you're going to want to tune in to FightingIllini.com's coverage of tonight's match at 6 p.m. Eastern.

Last year, at this time, Florida had ceded its place in the constellation of softball teams to USF, crashing and burning in the Gainesville Regional as turmoil roiled the Gators and ruined their season.

This year, things are a lot more harmonious. And Florida's marching along to its new drumbeat. 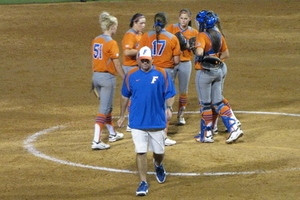 Florida's opening loss in the 2012 Gainesville Regional was just one part of an awful weekend.

No. 2-seeded Florida swept the Gainesville Regional over the weekend, topping Hampton 7-1 on Friday, and getting 11-1 and 2-0 wins over USF and ace Sara Nevins on Saturday and Sunday. The Gators trailed in each of the first two games after letting up first-inning runs, but Florida answered Hampton with a four-run rally in the fourth inning and got homers from Kelsey Horton and Taylore Fuller in the fifth inning, and Lauren Haeger pounded USF pitching for her 18th home run of the year and seven RBI on Saturday, tying Florida's team record.

Sunday's game was a true pitching duel, however, as Hannah Rogers held the Bulls in check for a complete game shutout, and Nevins allowed both of USF's runs without yielding a hit, as Florida took a 2-0 lead produced by walks and hit batters to the top of the seventh inning before Kelsey Stewart rapped a single off Nevins.

The Gators will move on to face UAB in this weekend's Gainesville Super Regional, and are lucky to get the Blazers, upset winners over Louisville and UCLA in the Louisville Regional this past weekend. Game 1 of that best-of-three series will be on Saturday at 1 p.m. at Katie Seashole Pressly Stadium, and will be televised by ESPNU, while Game 2 is Sunday at noon, and slated for ESPN.

For a while, it looked like Florida was going to stage a massive upset at the NCAA Baton Rouge Regional over the weekend. Then, on Saturday, Alabama's excellent men's golf crew came back with the round of the weekend.

But the Gators took more than a berth to the NCAA Championships for the 13th consecutive year away from the competition.

Florida finished in second at 10-over, six strokes behind Alabama, after an eight-over Saturday 296 that helped the Crimson Tide (who fired a six-under 282, the best round of the competition), and after T.J. Vogel, Tyler McCumber, and Eric Banks were first, second, and tied for third heading into the day, Vogel and McCumber finished tied for third, and Banks in a tie for 17th.

That's what happens when two very good rounds are followed by an over-par performance, as was the case for all three golfers (Vogel went 70-71-74, McCumber 70-72-73, and Banks 72-71-81) and Florida (286-292-296) as a whole. The Gators led Alabama by 10 strokes after Thursday's first round, and eight shots after Friday's second, but exceptional days from Scott Strohmeyer (69 on Saturday) and Bobby Wyatt (a Saturday 66 that was the best round of the competition) led both players to leapfrog Vogel and McCumber for first and second, respectively, and powered a charge by the most consistent team in the field, one that has won its last five tournaments.

Florida's slim national title chance is more than it had before this weekend.

Florida's going to see that Alabama team again at the NCAA Championships in two weeks, but the Gators did produce the second-lowest round of the weekend on Thursday, and now know that Vogel and McCumber can go low in the same tournament. Both players finished in the top five for the first time since Florida's first tournament of the fall season, and each has the game to go low and win medalist honors at the NCAA Championships.

If both can rack up birdies there, Florida has a slim chance to win another national title, which would be its first since 2001. And while a slim chance isn't much, given how great every NCAA Championships field is, it's more than virtually anyone would have given the Gators before this weekend.

Florida's lacrosse team has done a lot in its four short years of existence, but perhaps the most painful thing the Gators have done is make a pair of nemeses. One is Northwestern, the reigning titan of women's lacrosse, which will compete with Florida for ALC titles for years to come.

The other is Syracuse, which has eliminated the Gators from the last two NCAA Tournaments, most recently on Saturday, with a 13-9 victory in the Carrier Dome that ended Florida's dream of winning a national championship with its first recruiting class.

The Orange's talented duo of Alyssa Murray and Kayla Treanor dazzled on Saturday, darting past Florida defenders time and again and helping Syracuse build a five-goal lead in the second half that the Gators could not erase. Florida couldn't get any offensive consistency until the final moments of the game, thanks in part to swarming and physical 'Cuse defense.

Without repeating too many of the points from our Saturday post or cannibalizing a post to come on the future of the team, Florida lacrosse's great success to this point is making failure something unexpected and painful; no one could have imagined that the Gators would be great in their nascence, but Amanda O'Leary and her talented players have proven to be successful beyond most dreams. And that is the foundation of a powerhouse.

It's also nice to have measuring sticks like Northwestern and Syracuse. Florida will do well if it can continue competing with the best teams in the sport.

Florida's beleaguered baseball team won its Thursday series opener against Georgia, ensuring the Gators' sixth straight winning regular season and the .500 record necessary for NCAA Tournament eligibility. If the Gators want to make sure they're going to avoid a losing season overall, they will need to play better than they did in the two other games of that series.

Florida followed its 4-2 Thursday win with woeful 3-1 and 9-2 losses on Friday and Saturday, dropping its record to 29-17 overall and 14-16 in SEC play; this is the first time Florida has had a losing SEC record under Kevin O'Sullivan. And Florida's stretch run has been abysmal, with the Gators going 4-8 over their last 12 games, winning just two SEC contests, after an 11-1 tear that featured road wins over Mississippi State and Florida State and a home sweep of South Carolina.

Florida will see Texas A&M in the first round of the SEC Tournament on Tuesday at 5:30 p.m. in Hoover, Alabama, but I wouldn't bet on the Gators getting past the Aggies, who have been a white-hot 15-1 in their last 16 games, and had a 14-game winning streak snapped over the weekend in a 5-4 loss to Alabama. Florida is also 1-5 against A&M, having lost series to the Aggies in Gainesville in 2006 and College Station in 2007.

One bright side for Florida: Sophomore hurler Johnny Magliozzi will take the bump on Tuesday, and his 4-1 record and 2.14 ERA give him the team lead in both winning percentage and ERA.