The Cocktail Party, the War for the Oar: Whatever you want to call it, Florida-Georgia has one of the deepest, richest histories among all college football rivalries. How will this year's chapter play out?

Long, long ago, Florida's programs and tickets used "The _____ Game" as titles. I guess that's good enough for our season preview. Neil's writing them, and they'll run once a week. We're moving them to Mondays, too.

Before we get to my Georgia game preview, let's quickly run through the picks so far:

Why Is This Year's Game So Important?

I wrote about the 20-Year Curse in my history of the Florida-Georgia rivalry, but never really boiled it down. Basically, there are 20-year periods in which Florida and Georgia trade dominance of their rivalry, and during them, for the team subject to the curse, bad things happen in the Florida-Georgia game that don't normally happen. If you want reasons that that curse exists, look at the seemingly arbitrary change in the winds over the last two years.

From 1990 to 2010, Florida went 18-3 against Georgia. But last year, Florida turned the ball over six times in the Georgia game; they hadn't turned it over that many times all year up to that point. And in 2011, excluding the Georgia game, Florida's defense faced 22 fourth downs, and allowed opponents to convert 10 of them. Against Georgia, however, the Gators not only let the Bulldogs convert all three of them, but two of them went for touchdown passes.

The curse has afflicted Georgia on the other side, too, and more times in recent memory than it's happened to Florida: Why did Terrence Edwards, the SEC's all time leading receiver, pick this game to drop a crucial pass late in the 2002 game? Why did Chas Henry and Steve Addazio have big games as kicker and play-caller in 2010, when neither did anything well in those two roles for the rest of the year? (Henry's punting was flawless all year.) Why did DJ Shockley pick this game to be injured in 2005? How else can you explain Anthone Lott calling a timeout literally seconds before Eric Zeier threw the game-tying touchdown pass in 1993?

This game is obviously important for the SEC East standings, considering Georgia has won the last two SEC East titles. But even more important is the psychological effect this game can have on Florida should they lose. Two, three, even four wins in a row cannot erase two decades of Florida dominance, but it could start a two-decade long run of Georgia dominance. Proving that the 20-Year Curse isn't actually real might be as valuable to Florida as getting its first win over the Dawgs since 2010.

But enough with the curse stuff. Let's get to the Xs and Os.

Georgia's offense could be fearsome. It all starts with fourth-year starter Aaron Murray, who plays a lot better against Not Florida than Florida. He's got a good arm and great accuracy, and he's definitely going to have help from his running game, too. Gurshall may be a cheesy nickname they want to leave behind, but Keith Marshall and Todd Gurley have certainly emerged as one of the nation's best running back tandems. Gurley proved particularly dangerous in 2012, and the Gators have to shut him down, or else they're going to lose the game. It's that simple.

The other component to UGA's offense is its passing game, which is particularly lethal when the running game is established. The speedy Malcolm Mitchell and the dependable Michael Bennett return as Murray's top targets, as do tight ends Jay Rome and Arthur Lynch. In addition, the offensive line returns mainly intact.

To repeat: this offense could be very, very good.

What makes Georgia's offense really good is its balance. Gurley and Marshall are very good running backs, but they may be most dangerous when they don't have the ball if Georgia is going to run lots of play-action out of two-tight end sets. With several Florida defenders keeping an eye on Gurley/Marshall, and thinking it's a run because of the dual tight end set, Murray can pull the ball out from their jerseys and have a wide open Lynch or Rome, who are both very good pass catchers.It's going to be a little like what the Patriots did before Aaron Hernandez dumped his life on its head.

Unlike the Pats' offense, though, the Bulldogs are going to use their running game to pound Florida, because they're going to be trying to hide their porous defense. (We'll get there.) They'll try to bleed clock, move the chains and maintain long drives if they're smart, and when they need to, they'll let Murray loose.

Everything starts with stopping Gurley and Marshall.

The Gators have to invade the backfield like their lives depend on it. Everything starts with stopping Gurley and Marshall. If Florida renders those two ineffective, that completely takes away Georgia's ability to use play-action, and then Murray will be under lots of pressure.

And as we've seen in past games, Murray has made some terrible choices under pressure against Florida (eight turnovers in three games). Will Muschamp needs to take his chances in one-on-one coverage. He's got two terrific corners in Loucheiz Purifoy and Marcus Roberson; they should be able to contain Bennett and Mitchell most of the time. When they don't, well, that's what safeties are for, and Florida's pretty good young safeties should be close to fully comfortable by the Georgia game. Expect to see Florida routinely send seven, eight, even nine on some plays to ensure that the running backs have nowhere to run and Murray no time to throw: It's worth the risk.

Good thing Georgia's offense can score, because its defense is a mess. Gone are sack artist Jarvis Jones, ball-hawking safety Bacarri Rambo, solid cornerback Sanders Commings and run clogger John Jenkins, along with all the rest but two starters. The lone returning starter of value is Damian Swann, and he's going to need major help in the secondary.

Georgia does have some talented youngsters on the bench (though not from its latest recruiting class) but unless they can step up and produce immediately, the defense is going to go through more than its fair share of growing pains.

The Bulldogs shut down the Gators' running game in each of the last two years, and that's what they've got to do if they want to win again. Florida is very powerful up front, and the Dogs have to find a way to somehow match the Gators' strength in the trenches. If they don't, it's going to be a long day for them, because that's what the Gators like to do the most.

Will Muschamp loves flexing his line's muscle, and he'd love nothing more than to do it against his former team, which is the one annual foe that his Gators have not had success running the ball against yet. Georgia knows this, so they've got to be prepared for it, and besides, to this point, Florida's running game under Muschamp has been more of a threat than its passing game.

Wouldn't it be nice to see Jeff Driskel break out in this game after being a one man turnover machine last year? All Gator fans seem to remember is Jordan Reed's fumble. However, Driskel threw two picks, once in Georgia's end zone, and fumbled twice, with Florida recovering one of the two carpet falls. 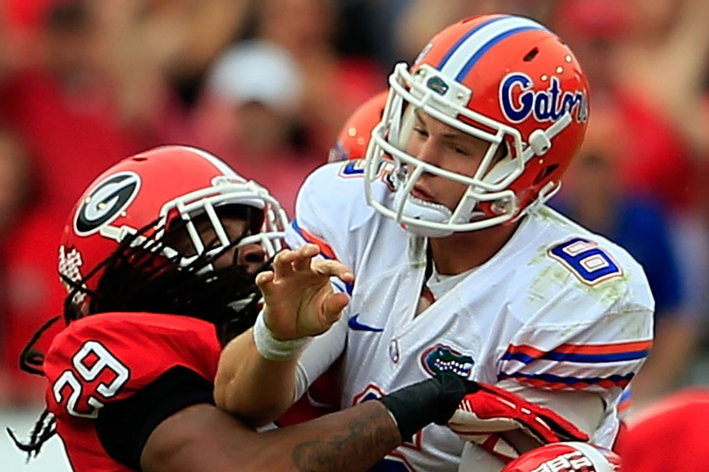 Muschamp knows Georgia is going to try to stop the run, and since he has the confidence in his line to block for Driskel, as well as the confidence in Driskel to make the plays himself. Look for the Gators to establish its running game just enough to keep Georgia honest, and then watch for Brent Pease to open it all up at once, and try to catch Georgia's young defense by surprise.

The Solomon Patton reverse didn't work so well last year; maybe this year he can redeem himself. Maybe Trey Burton can get involved in some Wildcat plays, and maybe Quinton Dunbar and Andre Debose can get free deep. The idea is to overwhelm and confuse this team of greenhorns so that they self-destruct. And maybe Florida's offense isn't good enough to force a self-destruction, but confusing the Bulldogs enough to force busted coverages and assignments might be good enough for a win.

Once again, it's the turnover battle that will make or break this game. The last time the team that won the turnover battle lost the game was 2004, and that was because Georgia only turned it over once to Florida's zero times in a 31-24 win. Ever since, the team that's given the ball away more has also given the game away, and six Florida turnovers directly paved the way for a 17-9 Georgia win in 2012.

This is usually the point where I would give a last minute review of the Xs and Os, but this game always seems to be won by factors that have nothing to do with Xs and Xs. Even Georgia's losses as the putative better team in the last two decades came in ways that defy logic. Georgia lost to Ron Zook twice!

As for this year's game, I'm very, very hesitant because of those aforementioned factors, but I'm going to pick Florida with my fingers crossed just because the Bulldogs' defense appears to be the worst it's been since Willie Martinez's days. If Florida takes care of the ball — and that is a HUGE if — they will out duel Georgia in a shootout.