Is it possible to have good points and still be digging too deep a hole?

Over the weekend, Ohio State coach Urban Meyer spoke out at length on the subjects of Aaron Hernandez and his disciplinary practices while at Florida for the first time since Hernandez was charged with murder in late June. And what he had to say amounted to a defense of his program and time at Florida that is only going to frustrate his critics raise more questions.

Meyer's comments to Pat Dooley of The Gainesville Sun were mostly short and to the point.

"I just received an email from a friend where there is an accusation of multiple failed drug tests covered up by the Univ. of Florida or the coaching staff," Meyer wrote in a text to The Sun. "This is absolutely not true. Hernandez was held to the same drug testing policy as every other player.

"He was an athlete at Florida 4-to-7 years ago and there are some comments being made that are not correct. Our staff, myself and our families worked very hard to mentor and guide him. Prayers and thoughts are with the family and friends of the victim. Relating or blaming these serious charges to Univ. of Florida, myself or our staff is wrong and irresponsible."

Meyer also told Dooley that Hernandez was suspended for Florida's 2008 opener against Hawai'i for failing a drug test, and seemed to suggest that Hernandez's involvment in a 2007 shooting in which he was initially identified as a suspect was minor, saying he was informed of the incident by an assistant coach and "didn't think about it again until a couple of days ago."

Meyer's interaction with The Columbus Dispatch's Tim May was more extensive, and resulted in an interview printed on Sunday, calling accusations that he was an enabler when it came to Hernandez "not true," downplaying both the shooting incident and Hernandez's 2007 involvement in a fight at The Swamp, and standing behind his methods of coaching. "Relatively speaking, (Hernandez) had very minor stuff," Meyer told May, but he also mentioned the influence of Hernandez's hometown of Bristol, Conn.:

Q: You mentioned that your concern for Hernandez rose most when he occasionally would visit his hometown.

A: His people back home said, "Keep him (in Florida), don’t let him come back home" (because of what they saw as unsettling influences). That was a big part of it, now that I remember it. And I didn’t understand the seriousness of it. People warned me and the coaches warned me, saying, "He can’t go back home." Again, though, I had no idea we’d be talking about what we are now.

I tend to believe that Meyer did as well to coach, teach, and discipline Hernandez as any of his players, and I believe Meyer when he says both that he tried to keep Hernandez out of trouble and that Hernandez only failed one drug test. But I also think he does himself no favors by standing behind his time at Florida, suggesting that he did everything he could, and insisting that he has neither changed nor needed to since leaving for Ohio State.

More on Meyer's philosophy of discipline 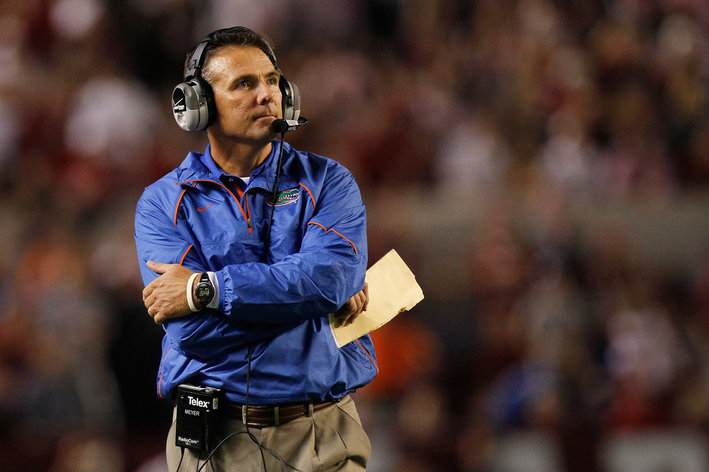 The tragic death of a former player has influenced Urban Meyer's thinking on discipline.

Plainly, Meyer did not do everything he could have at Florida, because he could have done far more, by penalizing failed drug tests more harshly (if anyone could have gotten Florida's drug testing policy changed, it was Meyer) or giving fewer second chances. (Whether he should have is more debatable.) He has been cognizant, as early as his introductory press conference at Ohio State, of the "bumps in the road" at Florida, but has yet to make a compelling case to support repeatedly downplaying them. His notable omission of the "top one percent of one percent" line, used when he was introduced at Florida, indicates an awareness of the need to set lower standards or be held to his own high ones.

Admitting and explaining all that would be relatively painless, I think: It requires little more than some swallowing of pride and some writing of apologies, and Meyer can't be doing much with his players at this point in the summer as it is. And I believe an admission of guilt and contrition is what people want most from Meyer at this point, as it would give many the moral high ground and a reason to say "I told you so!" and wag a finger at his brilliant but seemingly lawless Gators.

But I can understand why Meyer's reluctant to give one. It's not as if there's no finger-wagging now, or as if Hernandez's alleged recent actions are actually attributable to Meyer; why take the blame for something that really isn't his fault when he's already going to get it?

Thus, Meyer's stuck in a catch-22: Should he own up to being lax when it comes to discipline for the sake of being made to look like a man who has learned from his mistakes, he'll just look like he was previously a fool; the present situation is little better, but at least it doesn't require owning up to a prior abdication of duty. There are far worse predicaments, surely, but Meyer has to be hoping football hurries up so as to shift this one to the background.