Matt Jones's viral infection could leave Florida without its starting running back to begin the 2013 season.

Share All sharing options for: Matt Jones still not cleared to practice after mysterious viral infection, could miss games

Here is the bad news about Florida running back Matt Jones: He has still not been medically cleared to return to play after a viral infection waylaid him at the end of July.

Here is worse news: Florida is now preparing for the possibility that Jones will miss games — plural — at the beginning of the 2013 season, which could impact his availability for Florida's early-season skirmish with Miami.

And here is even worse news: Jones has a long-term prognosis, and it's "iffy."

Will Muschamp told reporters this at his Monday media availability, and mentioned that Jones missing games may be what eventually happens.

#Gators coach Will Muschamp says Matt Jones missing a game or two "may be the reality."

Muschamp said they've got to be very careful with Matt Jones and how they bring him back so they don't have a "relapse of the situation."

Muschamp said RB Matt Jones will play this season, but there no set timetable for his return. He's recovering from severe viral infection.

If that sounds bad, consider this, too: Viral infections aren't treated with antibiotics, as Muschamp has said Jones was treated, and generally don't have long-term effects. It's possible that, through inexactitude or misunderstanding, the story on Jones's health is actually seriously underrating the severity of his infection.

The Tampa Bay Times's Antonya English still has the best story on Jones's condition, in which his high school coach, Armwood's Sean Callahan, calls the infection "fast" and "vicious" and says it "really roughed him up." Callahan says he was told it was viral, too, and quotes a timetable of two to four weeks for recovery, much better than the six to eight months that a bacterial infection could last.

Then again, Muschamp did say today that Jones will play this year, which should basically rule out a bacterial infection ... though having to be careful so as to avoid a "relapse" makes it sound like Jones has some special susceptibility to infection.

If that's confusing to you, I feel better: It's confusing as hell to me, too. Consider that Jones is a college sophomore who is actually having all this happen to him and you probably get some of why he looks kind of anxious in the video recap of Florida's Saturday practice at the 1:39 mark. 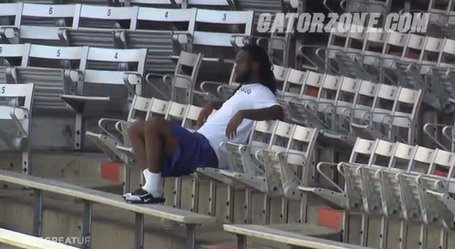 But, because I was looking for it, I'm also interested that Jones seems to have lost a little muscle tone in his legs. Compare that to the picture at the top of this post, which is from the spring game, or this video, which has plenty of spring practice footage.

This is, of course, not all that unusual for someone who has been forced to rest and recuperate from a serious illness. Those people, however, are generally not expected to carry the ball hundreds of times against SEC defenses; their long-term prognoses may be "iffy," but usually don't include potential shoulders to the gut from 300-pound linemen.