The traditional Thanksgiving rivals meet with more than just a game on the line; they meet at a crossroads. Florida's won seven out of the last nine in the rivalry, but FSU's won two out of the last three.

Long, long ago, Florida's programs and tickets used "The _____ Game" as titles. I guess that's good enough for our season preview. And this is the last piece in the series.

The Florida State Seminoles, the Gators' traditional Thanksgiving weekend rivals, will come into this game looking for revenge. Florida dissed them down on their home turf a year ago, and you can bet the Noles will be looking to return the favor this time around in Gainesville. We've already discussed how intense this rivalry is, but it never hurts to reiterate it: these teams hate each other... with a burning passion.

Why Is This Year's Game So Important?

Aside from getting to mock the opponent's arm gestures, both teams really want this win to get the momentum of the rivalry on their side. A Florida win, and it's eight out of ten for the Gators, and two straight. If FSU wins, however, it's the Seminoles who will be on a run, winning three out of the last four. Throw in the recruiting stakes, and the amount of trash both fan bases throw at each other, and well, let's be honest: This game means everything. That's as far as I can go. Define everything for yourself.

Jimbo Fisher has recently tabbed freshman Jameis Winston as his starter. Now, that could completely change if he performs poorly, and there are eleven games on FSU's schedule before Florida. Behind him is Sean Maguire, who went to Seton Hall Prep (my personal high school rival, but I've met him and he's a nice guy, so I'm rooting for him) and Jacob Coker, both of whom had very good springs. Whoever starts at QB will have an experienced line to work behind: Cameron Erving, Bryan Stork, Tre' Jackson and Josue Matias all return. The wide receiver position is just as experienced. Rashad Greene, Kenny Shaw and Kelvin Benjamin all return. To sum it all up: FSU's offense will be expected to be among the nation's best. Can they finally deliver?

The history of Florida-FSU 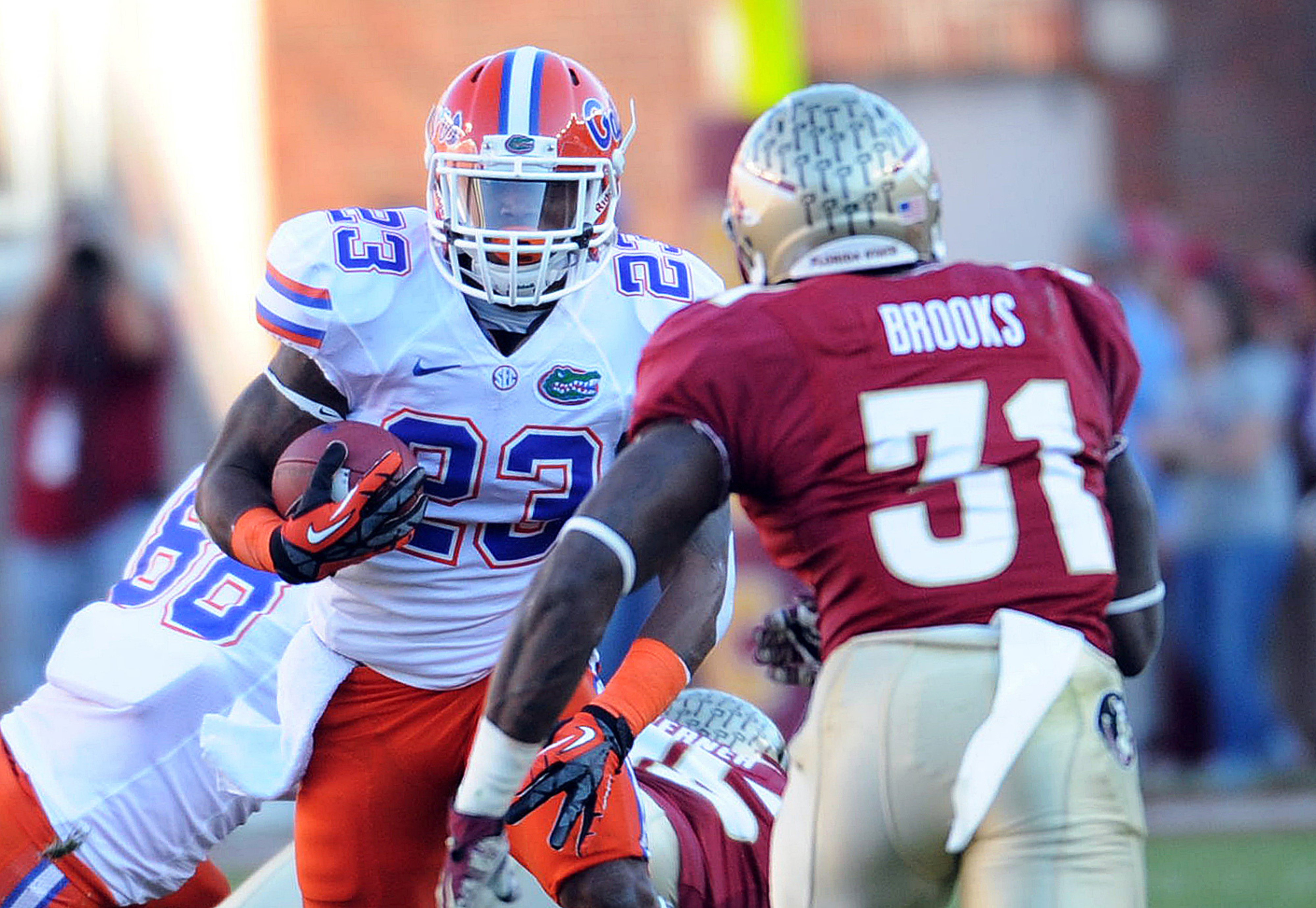 Tracing the 60-year history of a Sunshine State series.

It seems rather boilerplate and obvious, but FSU has to simply avoid turning the ball over against Florida if it wants to win. It's much easier said than done, but FSU has to establish a balanced attack early and often if they want to beat this Gators defense, even if that's not their style the rest of the year. We saw what happens if the 'Noles don't do that last year: Florida was by far the best team FSU faced on its schedule, and shut down the deep pass. While going for the big strike worked against the likes of Miami and Clemson, it's not going to work against Florida's outstanding cornerback tandem of Louchiez Purifoy and Marcus Roberson.

Winston is going to have to be content with dropping it off to a lot of safety valves and taking what Florida gives him, because this Gators defense is one that you cannot beat with pure speed or pure toughness. You have to be patient and wait for your opportunities. Move the ball slowly and methodically, and take a big play when it's there.

Simple. Harass Winston (or whoever is playing QB in this game) and force him to make quick decisions. Obviously, every team would love to do this against FSU, but Florida actually has the pieces in place to do it. FSU's QB is going to be young, and relatively inexperienced, whether it's Winston or one of his backups, so this increases the chances of creating a turnover. Expect D.J. Durkin to routinely send six, seven, and maybe even eight rushers to try to increase the chances of forcing a turnover.

Defensively, FSU could be in trouble. The 'Noles don't just lose seven starters, they also lose a plethora of backups who provided respectable service over their time at FSU. (Go ahead, FSU fans, point at your absurdly high recruiting rankings over the past few years and tell me again how Fisher simply replaces old pieces with new ones.)

There is certainly some talent in the front seven, between DT Tim Jernigan, Dan Hicks and Mario Edwards on the front line, and Telvin Smith and Christian Jones anchoring the middle level. But this defense loses seven starters from a team that got flamethrowers for three of four quarters on Thanksgiving weekend, so while it's probably fine for the ultra-weak ACC, I doubt it will be enough to slow down Florida's running game.

Unless, of course, this actually is Florida State's year.

If FSU needs to avoid turnovers on offense, they've got to be twice as desperate to force them against Florida's offense. It's already been established that FSU's defense was comically unable to stop Florida's simple running game; maybe it would have helped if they had to be on the field for fewer plays than the 72 Florida ran? I don't expect Jeremy Pruitt to play too much coverage unless Jeff Driskel has somehow exploded as a Heisman favorite at this point in time. Instead, look for Pruitt to do essentially the same thing that Durkin will do, sending lots of guys in the hope that at least one breaks through and gets to Driskel.

Anybody who watched last year's game knows exactly what Florida has to do in this year's game: Run the ball and don't turn it over. Even if Driskel has amassed 3,000 passing yards entering this game, why not give him a day off and watch Matt Jones and Kelvin Taylor pound the Seminoles for 200+ yards?

If it ain't broke, don't fix it. FSU's defense was ranked No. 1 against the rush last year, and then Florida ripped them for 244 yards on the ground. And that Florida State defense had Bjoern Werner and Tank Carradine (for most of the game, anyway) to set edges.

Brent Pease will let Driskel strut his stuff at some point, but expect the bulk of the damage to be done on the ground.

Matt Jones, Kelvin Taylor and Mack Brown vs. FSU's front seven. It's almost a known fact that the Gators' offensive line is going to have its way with FSU's run defense. But the question is the extent of the Gators' dominance in the offensive trenches. This is by far Florida's biggest advantage, and if FSU can keep it the damage to a minimum, they'll be in the game late.

If only I had a penny for every time FSU fans said, "No, guys, THIS time, we REALLY mean it. THIS is our year!" I'd be able to buy the Yankees. Florida fans do that, too, but the difference is, Florida, you know, actually does have national championship-type seasons every now and then.

FSU can win the ACC, and probably will, just like it did last year, but it's never going to equate to success against any Florida team worth sneezing at. We saw the difference last year, and while the player names will change, the result will not. FSU is simply not an SEC-caliber school. Florida is going to bully FSU, and, coupled with an earlier win over Miami, will secure its second straight Florida Cup.