Florida vs. Toledo, Theater of Operations: Previewing the Rockets' offense

The Florida Gators begin the 2013 season against a high-flying MAC offense in the Toledo Rockets. So the question then becomes how does the Gators' defense match up with the Rockets' offense?

Share All sharing options for: Florida vs. Toledo, Theater of Operations: Previewing the Rockets' offense

Theater of Operations is back for a third year. We'll try things a bit differently this year as things progress, but for now, y'all know the drill.

As we all know by now, the 2013 college football season begins for the Florida Gators tomorrow at noon against the Toledo Rockets. We also know that the Rockets belong to the Mid-American Conference. And what do we think of when we think of the MAC?

The Rockets are part of the reason why the MAC's games have been given that moniker. Some of the Rockets' offensive stats are just unreal. The MAC isn't really known for its defenses, of course, but that's besides the point. (Okay, not really, but we've got to make this preview interesting, right?)

Last season the Rockets averaged 6.02 yards per play (YPP). That's pretty damn good. For comparison's sake, Florida averaged 5.25 YPP. That's still pretty good, but don't kid yourself: That 0.77-yard difference makes a huge difference, one that will more than convert a few first downs over the course of a game.

The Rockets also threw for over 3,200 yards, and rushed for more than 2,500 yards at a pretty good 4.8 yards-per-carry. And yes, both those numbers were better than the Gators put up. And since Neil did a great job previewing the Rockets earlier this summer, we'll just go ahead to the video.

A couple points to note before we get started: From watching this, it's clear that this was a terrible offensive performance by the Rockets. Utah State just plain shut them down. I wasn't really expecting this kind of defensive domination against the Rockets offense, but all this really does is just make me that much more confident in a Gators blowout. 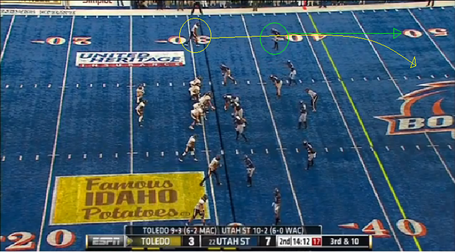 Soft coverage on third down against a team known for spreading the ball around. Yeah, that's smart. Russell is all alone at the top and the defense doesn't have a safety on that side of the field to help out. 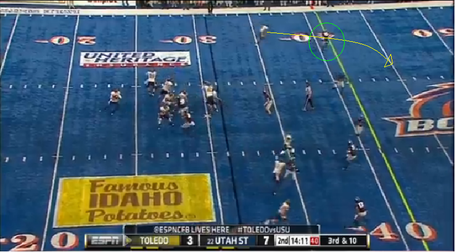 The defensive back (green circle) has been turned around the wrong way at this point. All Russell has to do is cut inside on his route and he'll be wide open heading towards the middle of the field. The good thing is, the Gators secondary is far too athletic for this to happen, aside from the rare occasion.

I fully expect Loucheiz Purifoy and Marcus Roberson to be burned like this ... one or two times maximum ... all season. (Hey, I can hope!) 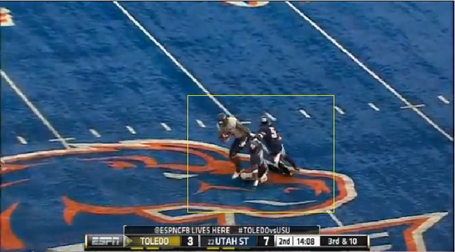 Here's another thing I don't really expect to happen to the Gators all that much throughout the season. I understand that missed tackles happen from time to time. But this is ridiculous. Two defenders and the wide receiver does a spin move, shakes them both off and gets another ten yards. Ridiculous.

Play No. 2: Kyler Fackrell's interception of a Dantin pass in the third quarter 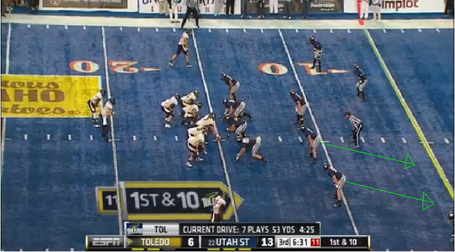 There's a reason why (probably) Dantin and all the other players at Toledo play for Toledo and not Michigan. Or Ohio State. Or Penn State. They just aren't that good, by and large. 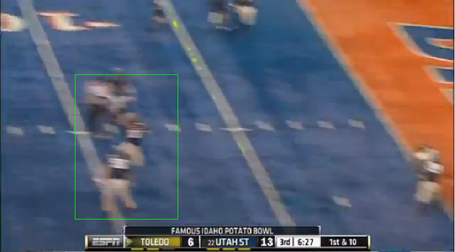 I know the quality isn't the best, I apologize, but I promise you this is where the ball is intercepted. I don't understand why you'd throw it into the middle of three defenders, and Dantin's receiver isn't even open! At the goal line you can see that the receiver is covered like a blanket.

Play No. 3: Bernard Reedy's 87-yard kickoff return for a touchdown

I'll give the Rockets (and the MAC) some due here: MACtion just isn't offense. It's special teams too! 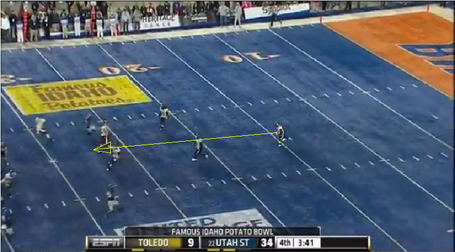 Lots and lots of open space here. Reedy is a few yards into his run and he's got a lot of blockers looking for something to do as well. Reedy is like Andre Debose: He doesn't try and juke every man; he's a one cut-and-go type of runner. 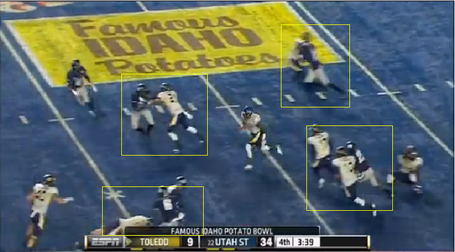 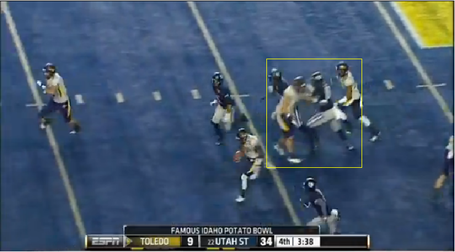 The great blocking continues. This was the final block that allowed Reedy to get to the open field. Nobody's going to catch him at this point. It was Toledo's only touchdown on the day; the rest of their points came via field goals.

I'm sure the Gators defense is aware of everything the Rockets bring to the table on offense so I wouldn't be too concerned. It might take the Gators' defense a few plays as they work out their nerves, rust or whatever before they really get going.

And besides, the Gators have long been a bend-but-don't-break defense. Bending should be fine against Toledo.