With Matt Jones out with a viral infection, Mack Brown stepped up in a big way with over 100 rushing yards and two touchdowns.

Mack Brown officially introduced himself to the college football world yesterday against the Toledo Rockets, and he impressed. Brown, who got the start at running back because first-team running back Matt Jones was out due to a viral bug, took advantage of opportunity and didn't look back.

On the day, Brown had 25 carries for 112 yards and two touchdowns, with 97 of those yards coming in the first half. Brown's average of 4.5 yards per carry is also very solid and shows that Brown just might be a very capable backup to Jones.

With good vision and patience, Brown looked to show the coaching staff and the Gator Nation that he's finally ready to shoulder the load as the Gators' main option at running back. Do we have a running back controversy? No. But it's very nice to know that we've got a capable backup just in case his number is called again. 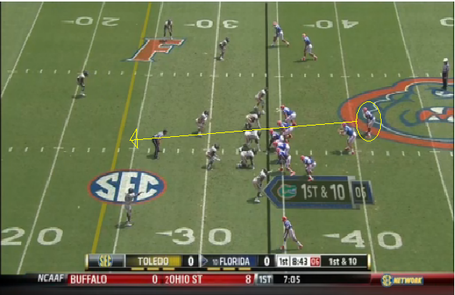 A slightly different look from the Gators out of the gate here, as the norm for a Brent Pease offense isn't out of the shotgun but I like this formation for one reason: It gives the offensive line time to build their blocks before the running back gets to the line.

Brown is just going to take the handoff and head right into the middle of the line behind the right guard. 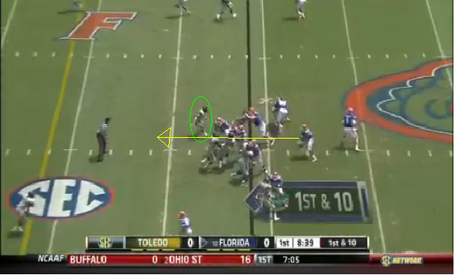 Great blocking the offensive line and receivers on the play. It appeared to me that this offensive line is more comfortable on running plays than they are on passing plays.

At this point there is one defender free (green circle), but as Brown gets to the hole he'll make that linebacker miss. 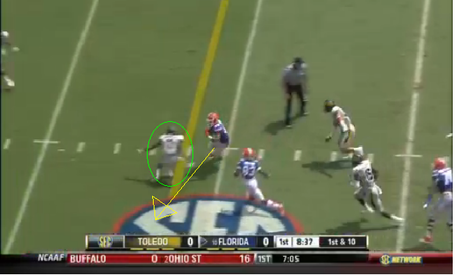 It was on this run that Brown first showed the intangibles of his ever-growing skill set. The cut to the left throws the defensive back off balance and allows for the extra 13 yards that were gained on the play.

I don't think that Brown is as hard a runner through the tackles as Jones, but we'll see if that can be improved upon as the season wears on. 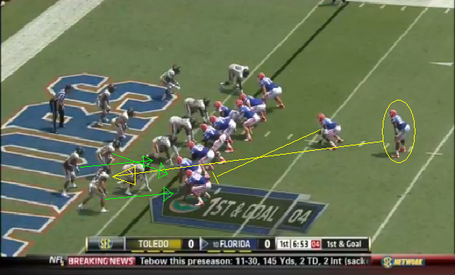 For Brown's first touchdown (and the Gators' first touchdown on their season-opening drive since Tim Tebow was quarterback in 2009), the Gators relied on great blocking overall. But the gold star goes to fullback Hunter Joyer.

Joyer gets the key block around the 2, and that will allow Brown to get into the end zone for the touchdown. 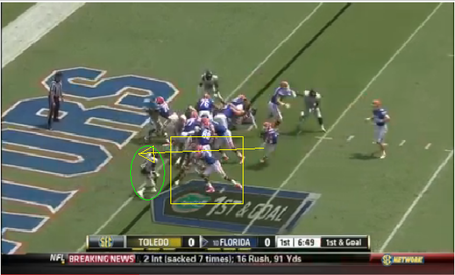 Joyer gets his block (yellow square), but there is still one defender free. That defender, however, thinks that Brown is going to take the play outside the tackle box. Brown has other ideas. For a brief moment there is a hole between Joyer and the left tackle, and Brown is there to take advantage. 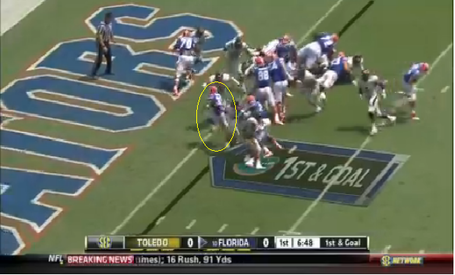 Brown is able to get the touchdown without being touched. At all. 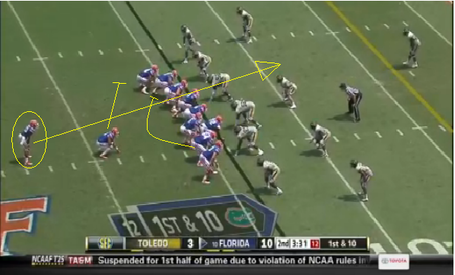 With the same formation used in the play above, the Gators are going to rely heavily on Joyer to get the lead block but he's not the only one this time. Kyle Koehne will be pulling from the right side for the line and he'll head left to pick up whichever defender Joyer is unable to get. 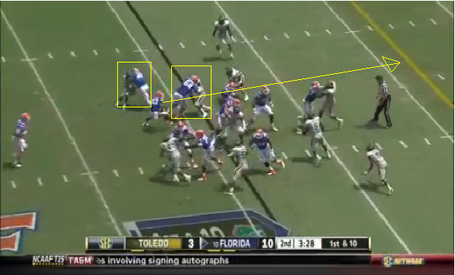 Both Joyer and Koehne get their blocks at the line of scrimmage, and that allows Brown to hit the hole and head towards the second level of the defense. Some great blocks in the secondary allow for this as well, and that shouldn't go unnoticed. 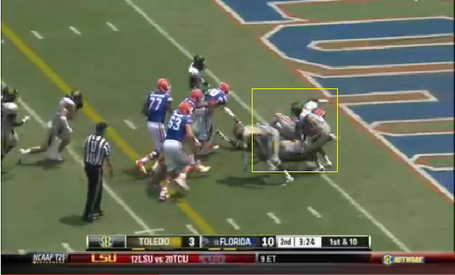 Even though Brown was tackled at the first down line, the way he was tackled caused him to fall onto and slide over at least two defenders, and he never touched the ground until he was in the endzone.

I was kind of surprised that this play wasn't reviewed extensively just to be sure because all plays like this seem to be, but I'll take it. Brown was due a break or two and this certainly qualifies.

We'll get to the rest of the game (probably something like a breakdown of the rest of the offense and then the defense) within the next couple of days, so fear not, Jeff Driskel's fumble that was the result of a missed block by Brown won't go unnoticed.