Florida vs. Kentucky, Theater of Operations: Getting ready for the mighty Wildcats of Kentucky

The Florida Gators begin life without a few key players against the Kentucky Wildcats on Saturday.

Share All sharing options for: Florida vs. Kentucky, Theater of Operations: Getting ready for the mighty Wildcats of Kentucky

If you're looking at things from a pure statistical perspective, the Kentucky Wildcats aren't the worst SEC team the Florida Gators will play this year. Thus far, the Wildcats rank 35th in passing and 39th in rushing in the country, having lost to Western Kentucky and Louisville and beaten Miami of Ohio.

Quarterback Maxwell Smith has thrown for over 500 yards and five touchdowns to lead the Wildcats' offense, while JoJo Kemp and Jalen Whitlow cover the ground game. Kemp and Whitlow have combined for over 320 rushing yards and two touchdowns on the year, and picked up a very good six yards per carry.

On the receiving end, it's Javess Blue and nobody else. Blue has 15 receptions for 197 yards and a touchdown; no other Wildcats receiver has more than nine catches.

Defensively, the Wildcats give up 23 points per game, which is good for 56th in the country.

In this review, we look at Kentucky's days against Louisville and Miami of Ohio. 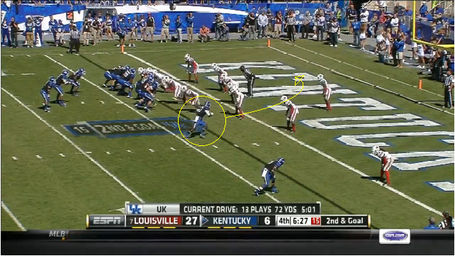 Just a little play action down by the goal line. Hmmm, think the Gators will ever do something like this? 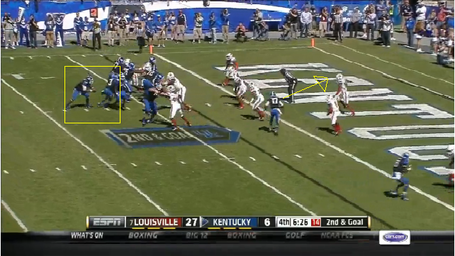 On the moment after the fake handoff, it doesn't appear that the receiver will be open. But he creates his own space, which is something that I'd like to see the Gators' receivers do more often. 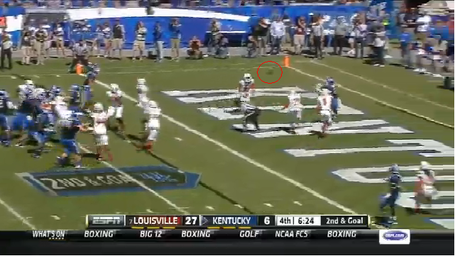 It's a great throw over a couple of defenders by Whitlow for the touchdown.

Play No. 2: Whitlow's touchdown run against Miami of Ohio 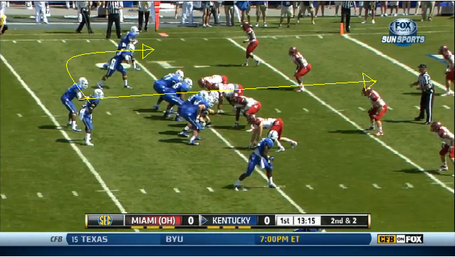 Nothing like a little zone read, right? Believe it or not, Kentucky actually has the athletes to pull this off against most teams. I don't think the Gators' defense falls into the category of "most teams," though. We'll see if Kentucky has any success with it on Saturday. 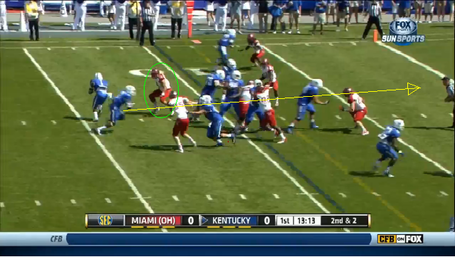 As the defensive end goes after the running back, Whitlow takes off right up the middle. 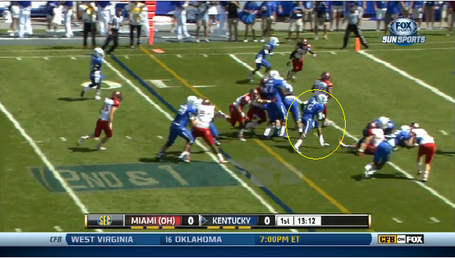 In case you're wondering, yes, Whitlow did manage to make it into the end zone untouched.

Play No. 3: Raymond Sanders' touchdown run against Miami of Ohio 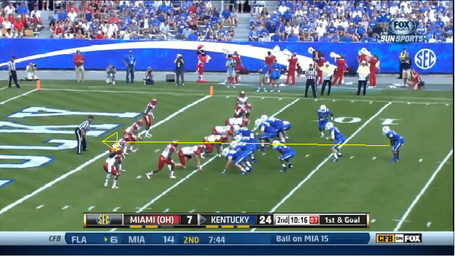 Even though he isn't the every down back, Sanders has some explosiveness. This play is an up-the-gut run in which he'll find a small seam and attack it. 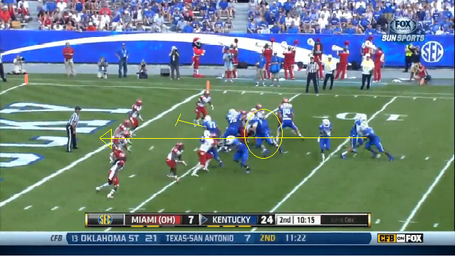 As the right tackle pulls to the middle of the lane, Sanders receives the ball. He's got two blockers open ahead of him and there are six free defenders. 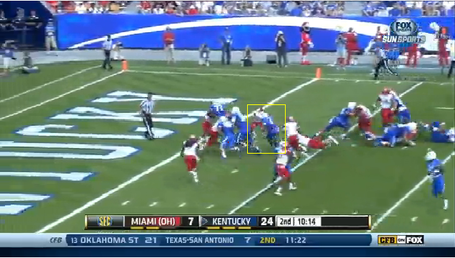 I really like this run, because Sanders doesn't try to dance around or anything he just runs straight and lowers his shoulders around the 3. Sometimes, less is more, and in this case, it worked.

While I think the Gators will be fine with Tyler Murphy at quarterback in this game, it's the loss of Dominique Easley that is more concerning in the short term for me. Kentucky's defense is nothing special, but their offense can explode from time to time.

I'm sure the Gators will win going away, but it's never a good thing to lose your leader. The Gators might not notice Easley's out from a production standpoint, that's not the issue. It's the leadership that matters most.