Florida vs. Miami, Theater of Operations: Duke Johnson leads the offense for the 'Canes

As the Florida Gators make what could be their final trip to Miami to play the Hurricanes in a long time, we look at the 'Canes' offense, led by Duke Johnson and Stephen Morris.

Share All sharing options for: Florida vs. Miami, Theater of Operations: Duke Johnson leads the offense for the 'Canes

The Florida Gators travel to Miami to play the Miami Hurricanes tomorrow at noon, in what could be their last meeting for a long time. The Hurricanes boast a talented offense and a suspect defense that the Gators should be able to exploit but that's not why we're here.

We're here to look at the 'Canes' rushing attack (mostly).

Running back Duke Johnson can do it all. He can catch, he can run and he can block. He's also quite possibly the next great running back in Miami's storied history following the recent success stories of Clinton Portis and Edgerrin James.

Can the Gators' defense slow him down? We'll see. The Gators' defense is probably the best that the 'Canes will play all year, so if any team can do it, it's likely to be the Gators. To take a look at the Miami offense, we'll look at some tape of the 'Canes' season opening win against the Florida Atlantic Owls from last week. 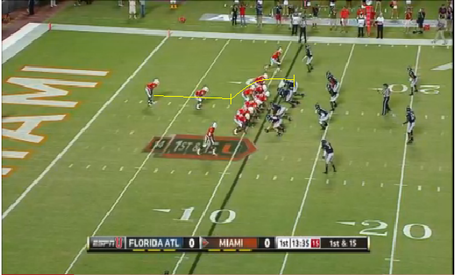 Nothing like an attempted flea flicker to start the season, right? Johnson will take the handoff and run to the line of scrimmage before flipping the ball back to Morris, and will then head out into the flat because the defense heads downfield into coverage. 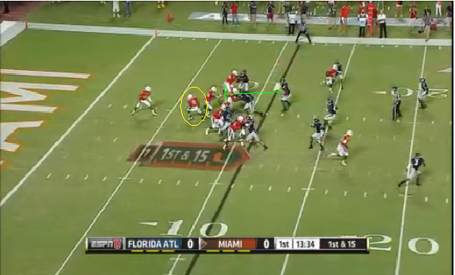 As Johnson flips the ball back to Morris, there is one linebacker left to cover Johnson in case he heads out for a pass. But that defender isn't going to be there long; once Johnson completes the flip, he comes rushing in, which allows Johnson to sneak out for a pass. 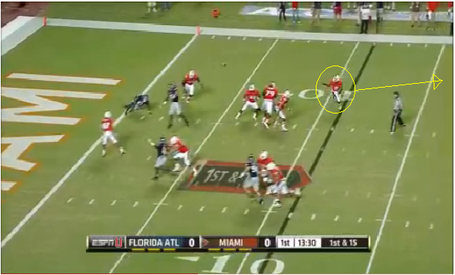 Johnson will catch the ball in the flat and he's got space to work with. You don't want to give Johnson space like this because he's got the speed and the moves to make people miss. He does just that on the play, which goes for 38 yards. 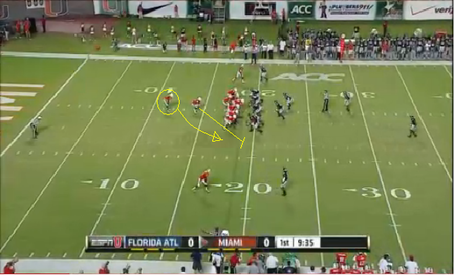 On this play, Johnson will take the handoff and follow the fullback to the right. There are two great blocks on this play that allow Johnson to gain the bulk of the yardage on this play. Keep an eye on the Miami wide receiver at the at the bottom of the screen. 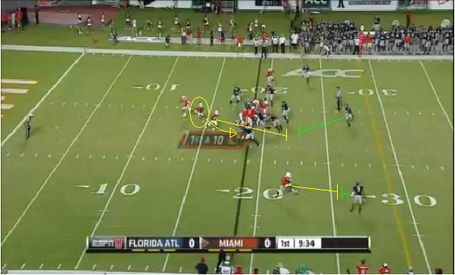 Johnson gets the handoff and is still following the fullback. One thing I've noticed about Johnson is that he does a great job of allowing his blocks to get set up before he hits holes, makes it through the line, and works upfield. He shows great patience as a runner. 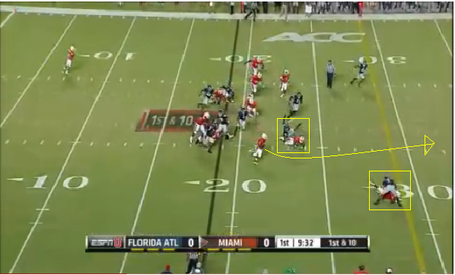 The blocks by the fullback and wide receiver (yellow squares) allow Johnson the space needed to gain big yardage on the play. Johnson ends up getting caught downfield, but not before he gets enough yardage for the play to be considered a massive success. 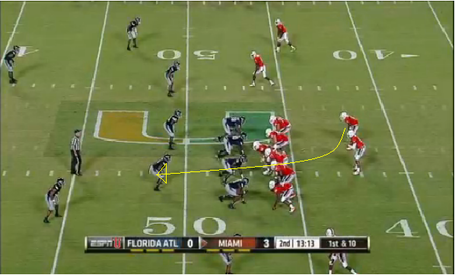 A different look for the Miami offense here, as they're in the shotgun formation. Johnson will take the inside handoff, hit the middle of the line, and get to the next level. 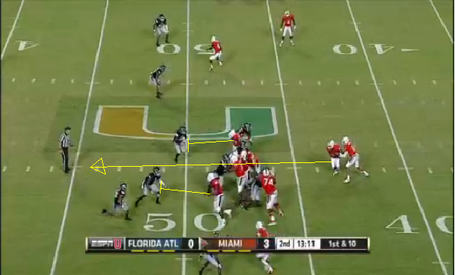 As he gets the ball, Johnson looks upfield to see if there's a running lane available. 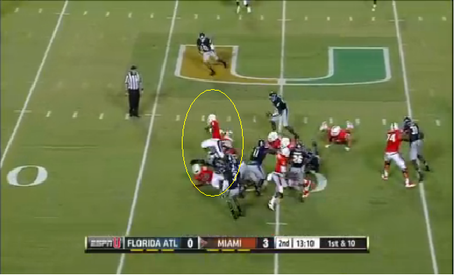 The most impressive part of this play is the hurdle pictured here. In order to get down the field, Johnson has to hurdle over two players. From there, he is off to the races. And nobody is going to catch him.

It is somewhat noteworthy that these three plays are some of Johnson's first touches of the football in the game. Granted, this was all against the Owls of Florida Atlantic, but still: If some of your first few touches (out of about ten) go for 38, 43 and 53 yards, respectively, you've had a heck of a day.

I don't think he'll have as good a game against the Gators defense, but I think that he'll be able to possibly get in a big play of two. I also think the Gators win, because of their defense, but they can't allow Johnson to get into space. He'll burn you nearly every time.