Florida vs. Miami, Theater of Operations: More of Gators' offensive failures against Miami

In its second breakdown of the offense of the Florida Gators' game against the Miami Hurricanes, Theater of Operations deduces that the Gators' offense was in fact uglier than originally thought.

Share All sharing options for: Florida vs. Miami, Theater of Operations: More of Gators' offensive failures against Miami

I'm just going to cut to the chase:

I'm tired of looking at the offensive plays from this game. It's boring and sad to me. On second thought, it's just sad. It's pathetic. We were promised changes from the offense over the course of the week and we got them.

But they weren't the changes we were looking for.

In this review, we'll look at Trey Burton's costly fumble and a couple of sacks on quarterback Jeff Driskel. I'll leave the rest up to you. I promise we'll get to more exciting stuff (like the outstanding play of the defense) tomorrow morning. 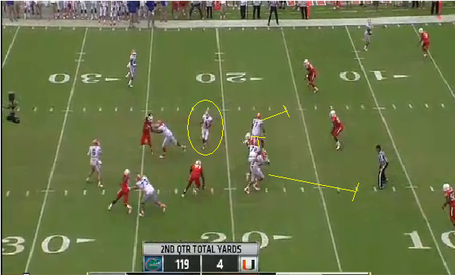 Burton catches the ball in the open field and he's got blockers in front of him. This would be a good thing, normally, but Jonotthan Harrison, who is the middle of the three blockers, will miss his block and set the chain of events in motion. 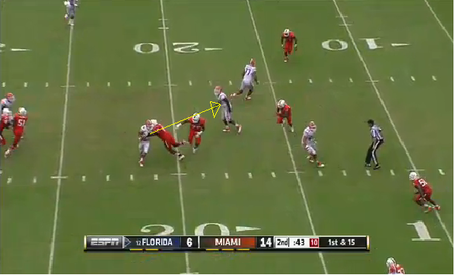 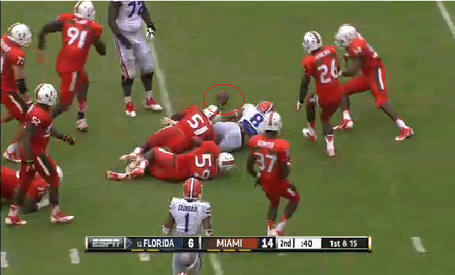 ... that's not supposed to happen. Sigh.

Play No. 2: Driskel gets sacked, fumbles 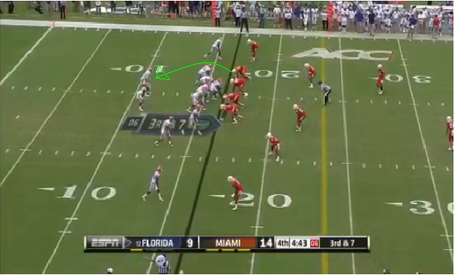 If I noticed anything in particular from Saturday, it's that the transfers on the offensive line had a bad day. Aside from Tyler Moore giving one of the worst performances in a Gators uniform that I've ever seen, Max Garcia just gets toasted on this play.

Toasted so bad that I'm pretty sure he's still burning. 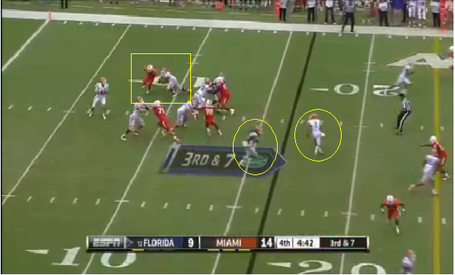 Are you freaking kidding me? Since when is Tyriq McCord suddenly Jadeveon Clowney?

The worst part about all this is that on this play Driskel has at least two options to throw to, and might well have converted for a first down. Unbelievable. Now I'm just getting mad. 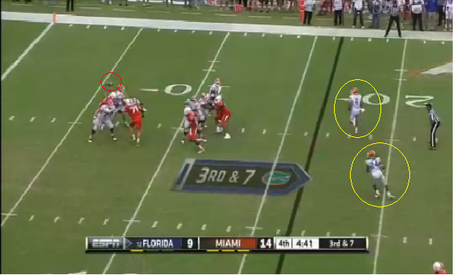 When Driskel gets hit, the ball comes loose (red circle) and his arm is clearly not moving forward. Both Burton and Matt Jones are still wide open.

Play No. 3: Driskel is sacked again 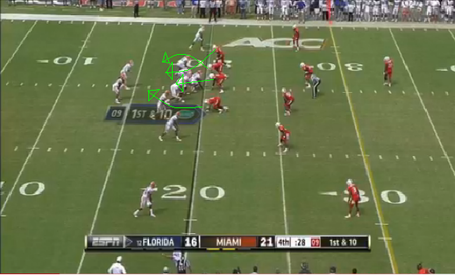 Because the Gators blew through two timeouts early, the Gators got the ball back after yet another defensive stop with under 30 seconds remaining in the game. But don't worry, folks: The entire offensive line would permit none of the possible last second heroics to transpire. 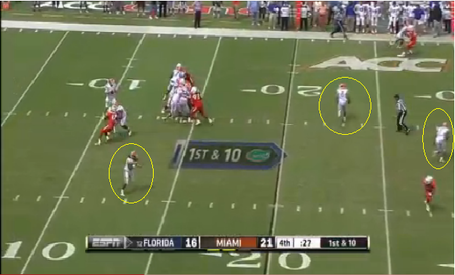 I'm not even going to discuss the fact that Miami rushes four and somehow gets three on the quarterback. What I'm going to point out here is that with 27 seconds left, on the Florida 20, in a situation where you're down five points and have no timeouts...

WHY DO YOU HAVE THREE PLAYERS RUNNING ROUTES THAT ARE EITHER: A) TOO SHORT OR B) IN THE MIDDLE OF THE FIELD!?!?

I had to watch this play six times to make sure this wasn't just a mirage. I literally have no more words. 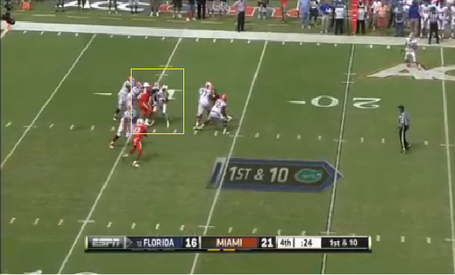 Actually, I have a few more words. Oh, hey, look, there's the sack that ends the game ... on a play that because of the routes that were being run wouldn't have worked anyway.

Just a ridiculous amount of incompetence from all levels of the offense throughout the entire game. Absolutely pitiful. We'll break down the people who actually looked like they cared tomorrow.

This offense is now almost dead to me.