There's a lot to read here, and a lot to digest. Do so with care.

The University of Florida released the full police report in the investigation into a claim of sexual battery against Treon Harris on Wednesday.

The three component parts of the University Police Department report released — a traditional narrative incident report with investigation history, including statements from multiple witnesses; a 63-page transcript of an interview with Harris from the morning of October 6; and a supplement including text messages and call logs from Harris and his alleged victim — are each more 50 pages in length.

In the incident report, Harris's alleged victim — while at Shands to undergo examination for the completion of a rape kit early on the morning of October 6 — tells UPD officers that, during a sexual encounter in Harris's dorm room in the early morning hours of October 5, Harris rolled on top of her, that she told Harris to get off of her, and that he was "dead weight" on top of her as they had sex; in one statement, she remembers specifically telling Harris "I don't want to have sex with you." Both Harris and his alleged victim agree that he walked her back to her dorm after this incident.

Later on the evening of October 5, after a text conversation about the events of the early morning with the alleged victim's roommate, Harris texted the alleged victim "Don't tell nobody bout nothing," to which she replied "And don't try me ever again" and "I wouldn't even come near me if I were yu" in separate messages.

Harris's alleged victim entered a complaint of sexual battery against Harris early on the morning of October 6, and UPD subsequently secured evidence from her room at 6 a.m. that morning. Minutes later, UPD officers secured the adjoining rooms of Harris and Quincy Wilson in the Springs Complex, and one began an interview with Harris about the events of the sexual encounter of October 5.

In the interview, which lasted nearly an hour and was audio recorded, Harris repeatedly tells a UPD detective that he had sex with his alleged victim, but that she never said no, or pushed him off of her; he later says he would not "play with a girl like that." Harris also asks the detective "So is this going to be on ESPN and stuff?"; draws a parallel with the investigation of Florida State quarterback Jameis Winston for an alleged sexual battery ("You know what I'm saying? You think I'm going to do the same as that?"); and repeatedly expresses disbelief at the allegation.

The interview ends when Harris asks for a lawyer, which is possibly prompted by Wilson texting him to say "Tell him you don't want to talk no more. You want a lawyer." and "Make sure he don't see this," and the UPD detective considers both Harris's Miranda rights and consent to search his room revovked at that point.

Later on October 6, Huntley Johnson, Harris's lawyer, contacted the Assistant State Attorney handling the case in an effort to reinstate consent to search Harris's room and cell phone, and to provide names of witnesses for UPD to contact. UPD obtained consent from Harris and, with the help of the Gainesville Police Department, completed a search of his room, with GPD taking custody of the Florida Department of Law Enforcement Sexual Assault Kit.

On October 7, UPD interviewed several witnesses to both Harris and his alleged victim on the night of the crime. These interviews present a narrative of Florida football players, Harris's alleged victim, and another woman leaving a club and heading to a Waffle House near the southern Interstate 75 exit of Archer Road in the early morning hours on October 5, only to find it closed and end up at the Kangaroo gas station nearby instead, with Harris being returned to campus with his alleged victim by another woman shortly afterward.

A female witness whose name is redacted in the police report gives the most detailed account of the night. It begins with that witness and Harris's alleged victim leaving Club Rain, a Gainesville nightclub, and deciding, along with a group of Florida football players, to get something to eat. This witness reports seeing Harris's alleged victim making out and having sex with another person, whose name is also redacted, in the back of her car while on the way to Waffle House and in the parking lot of the Kangaroo station.

The same witness reports talking to Harris's alleged victim over the phone in the early morning hours of October 5, and being told "Yeah, I could have sworn I said no" and "I think I said no." Later that day, that witness told police, she had a phone conversation with the alleged victim in which she said "Yeah, last night I think I had sex with Treon," and that "he jumped on top of me, and I just remember repeating, uh, no Treon, I don't see us like that." After discussion between themselves, the aforementioned text conversations with Harris, and a discussion of the sexual battery with "the heads of their Bible study group," before setting the wheels in motion to report it.

On the night of October 7, four Florida football players — Brian Poole, Marcus Maye, Keanu Neal, and Latroy Pittman — told UPD accounts of the trip to the Kangaroo consistent with the account given by this witness, including the account of Harris's alleged victim having sex in the back of that witness's car. All four of those players told UPD they first learned of the sexual battery allegation on Monday, with three hearing it in the Florida locker room and one being advised of it by Johnson.

One of these witnesses also told UPD about concerns over backlash from the football team for the report of the sexual battery complaint. With redactions intact, here is that passage as it appears in the report: 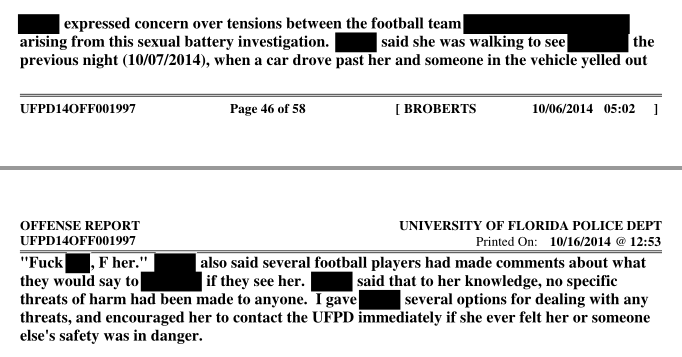 In the early afternoon of October 9, Wilson was interviewed by UPD, and told police that he remained home the entire evening of October 4 into the morning of October 5. Wilson said he heard the door to Harris's (adjoining) room close at about 2 a.m., but did not hear any talking from that room; later that morning, Wilson told police, Harris told Wilson that Harris and Harris's alleged victim had had sex.

After being suspended by the University of Florida and the UAA on Monday, October 6, Harris was reinstated on Friday, October 10.

Even after the withdrawal of the complaint, UPD continued its investigation, interviewing witnesses to a separate trip Harris and Pittman made to another location in Gainesville the morning of October 6, witnesses present when Harris's alleged victim discussed her sexual battery, and a witness who is apparently suitemates with Harris's alleged victim.

Of those witnesses, the latter gives the most interesting statement, saying that she overheard Harris's alleged victim tell someone "I caught two bodies tonight," interpreted as a boast about having sex with two partners, around 3 a.m. on October 5. She also told police that someone "had not told Law Enforcement all the details of what happened" on the night in question.

The report concludes with the case being closed, as this statement explains:

At this time, this case is being closed as the victim has completed a Complaint Withdrawal form. There are no other individuals know(n) at this time who would have had contact with either Harris or (his alleged victim) and have information specific to this case to provide to Law Enforcement. If at anytime in the future the victim comes forward and wishes to pursue criminal charges and/or any additional information relevant to this case becomes available, this case will reopened.

There is a ton to take in here, and I've spent the last three hours doing just that. And I'm really unwilling to do a whole lot of opining on this at this moment, because I have to think through how I feel about it.

So: Comments are closed on this post for now, and will likely be closed until Thursday morning, because I simply don't think anyone can get through the entire police report — all three files — in under an hour or two, and I want anyone commenting on it here to read it before doing so.

Read the report — all three parts. Try to make sense of it. Decide whether or not you want to discuss it. I'll be here for all that on Thursday.