Editor's note: I am in a fantasy league with Trevor. On Thursday, he traded away Brandin Cooks, Eddie Lacy, Zac Stacy, Demaryius Thomas, and Julius Thomas. At least he got LeSean McCoy and Keenan Allen in return?

Share All sharing options for: Florida vs. Tennessee: Scouting the Volunteers' defense with Rocky Top Talk

The first meeting between Florida and Tennessee happened back in 1916 to celebrate the end of World War I1. Florida leads the 43-game series 24-19, and that, in large part, can be credited to the fact that the boys from Good Ol' Rocky Top haven't gotten the better of the Gators since 2005. But UT and UF aren't at the peaks of their programs' potentials currently, which should give us a free-for-all come Saturday.

Tennessee is already about as battle-tested as a team can be four weeks into the season, with games (losses) against Oklahoma and Georgia already in the film room. Florida should, in theory, travel to Knoxville as another strong opponent, but after a deflating defeat against Alabama, who knows, really?

To get a better understanding of what Jeff Driskel and Florida's offense may be up against this Saturday, I sat down with Hunter Turner of Rocky Top Talk to give me his best Jon Gruden impression of Tennessee's film breakdown.

Like all good defensive film sessions, the starting point must come in the trenches. Tennessee comes into 2014 with an entirely new starting line up front. The Vols like to play out of a 4-3 Under, which is basically a 3-4 with one of the linebackers designated as purely a pass rusher — in Tennessee's case, Corey Vereen. It's a 4-3 in the sense of how many players line up at the line of scrimmage, but it gives a 4-3 setup two one-on-one match ups on the left side for the defense end and defensive tackle. Here's a visual: 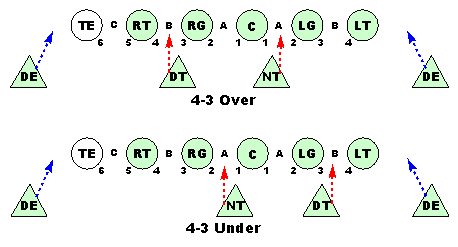 What stands out immediately when you watch the Vols' front seven is that they're fast, and that's because Tennessee only starts one player on the defensive line over 300 pounds. Tennessee's defense is built for damage control. Vereen has an explosive first step on the weakside blitz, and the front four is set up to get him as much success as they can. But if he fails, it's up to the linebackers to contain the rest of the play.

Tennessee has one of the most efficient defenses in all of college football — currently, the Vols are No. 1 in the country in opponent third down conversion percentage, having yielded just 11 first downs on 53 third downs. What they're best at is recognizing and predicting play types and adjusting with as many bodies in the right places as they can. Here's an example. 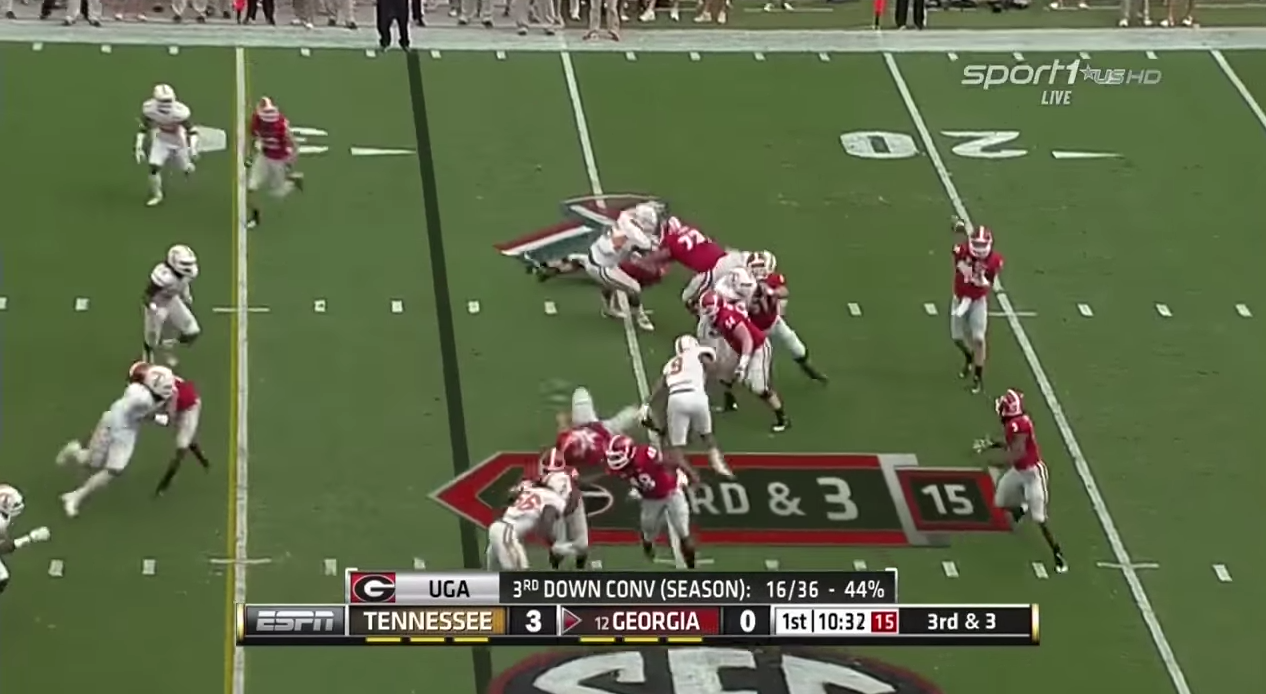 On this third down, Georgia's Todd Gurley receives the ball with two blockers near him and one downfield chipping Tennessee inside linebacker A.J. Johnson. He should be able to get to the outside and pick up the three yards, right?

Not only did the Vols get three players over to stop Gurley short, look at how many white jerseys are around the play after it's whistled dead! 10 out of their 11 on the field!

Let's take a look at that next level. Johnson is the Vols' MIKE linebacker and a true commander in the middle. He's been hot and cold as an NFL prospect, showing good instincts as a tackler and run stopper, but he does have his weaknesses (we'll get to that). The second linebacker is sophomore Jalen Reeves-Maybin. He's Tennessee's go-to coverage linebacker. Johnson will always have his eyes in the backfield and keep plays in front of him, but Reeves-Maybin is a player the Vols depend on to cover slot receivers, tight ends, or running backs out of the backfield. The other linebacker is Curt Maggitt. If Tennessee lines up in nickel (as they may have to quite a bit against Florida), Maggitt will play the second defensive end opposite Vereen; he's their second pass-rushing option. 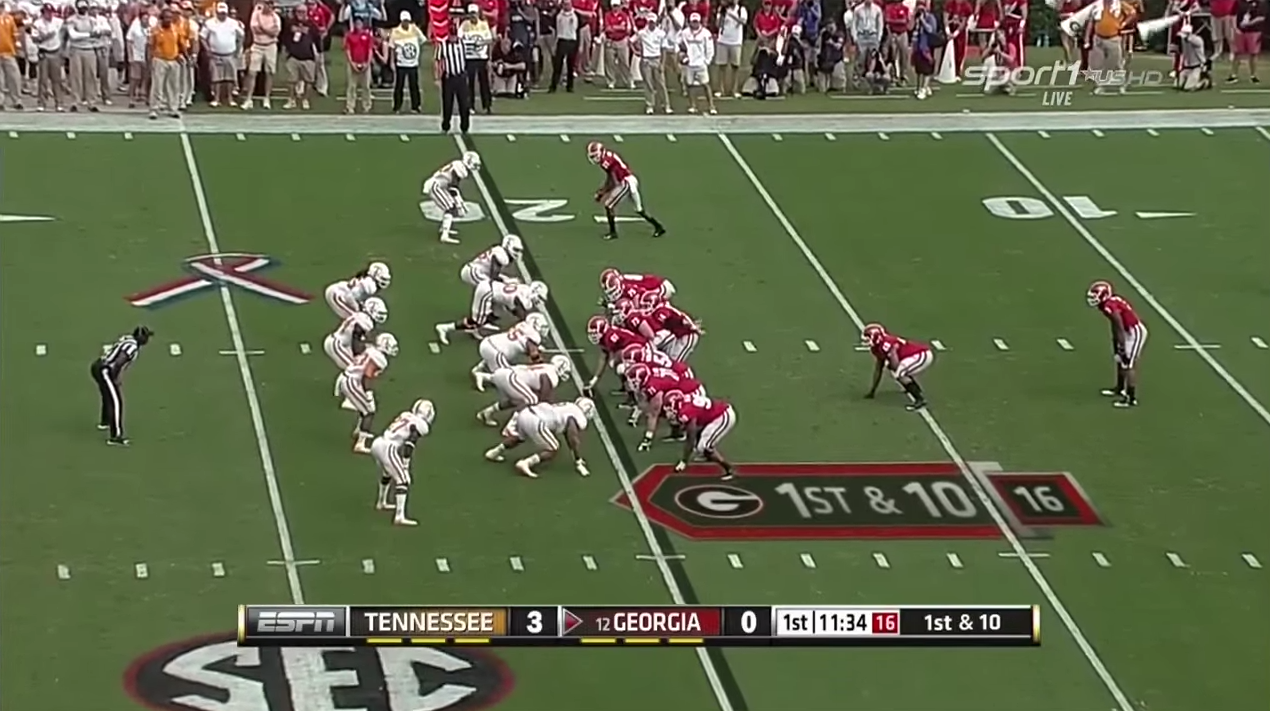 Hmmm. I wonder if Tennessee knows Georgia is running the ball? Nine players stacked in the box? I think so. The Vols know they don't have the size up front to play great gap control, but what they do is reinforce the other areas at the next level to make sure whatever damage is done is minimal.

This isn't going to be an incredible defensive line that gets push and stuffs players and quarterbacks for negative yards on a consistent basis. But Tennessee is tops on third down partly because of the work they put in on the first two downs. They know that if they force teams into third and seven or longer, they have the speed to keep up with routes reaching the line of scrimmage (since then they know it's a pass play against power teams).

So what would be a counter to a team that places their defensive bodies in the right position? Attack the edges. They can't be everywhere.

Tennessee's defensive is built to give up short, two- or three-yard runs, but make the explosive 10-yard runs few and far between. It wasn't until Sony Michel and Gurley were able to stretch the front seven (or eight) out that they were able to have great success on the ground.

Tennessee can only stop power runs by overwhelming an area. That's why they're trained to all swarm around the ball and gang tackle wherever possible. Countering by attacking the edges of the box forces defenders to break off blocks and make good one-on-one tackles. Johnson and Maggitt are great tacklers when the ball carrier is in front of them, but if teams can force them to make tackles going side-to-side, they'll have much better success in getting those few extra yards, because neither 'backer is great in pursuit. The Vols may be fast, but their speed is most effective in numbers, it seems.

Faster running backs have given the Vols constant trouble this season, but Florida doesn't have that speedster on the roster. Kelvin Taylor is certainly the quicker back when compared to Matt Jones, but his lack of pass-blocking consistency may sideline him more than Florida may need it to. If there were a game for freshman Brandon Powell to "break out", it would be this one — Powell has the legs to get to the edges and burst up the sidelines, though he's not a 4.4 guy — but he's out for this game with injury.

Finally, let's look at what Tennessee will bring to counter Florida's receiving options (if Driskel can find them). (See, guys! I can throw shade, too!)

As is usually the case with a four-man line, Tennessee will come out in a base Cover 3 zone where the field will be separated into zones more often than it will be divided by assignments. Cam Sutton is the stud defensive back. He's Tennessee's best coverage option (and a great one) as an outside corner. But as most teams do, the Vols won't just leave him to one side of the field in a Cover 3: They'll play out of a custom Cover 3 which will vary each play, depending on where Sutton lines up. It's likely he'll be Demarcus Robinson's running mate for the afternoon. 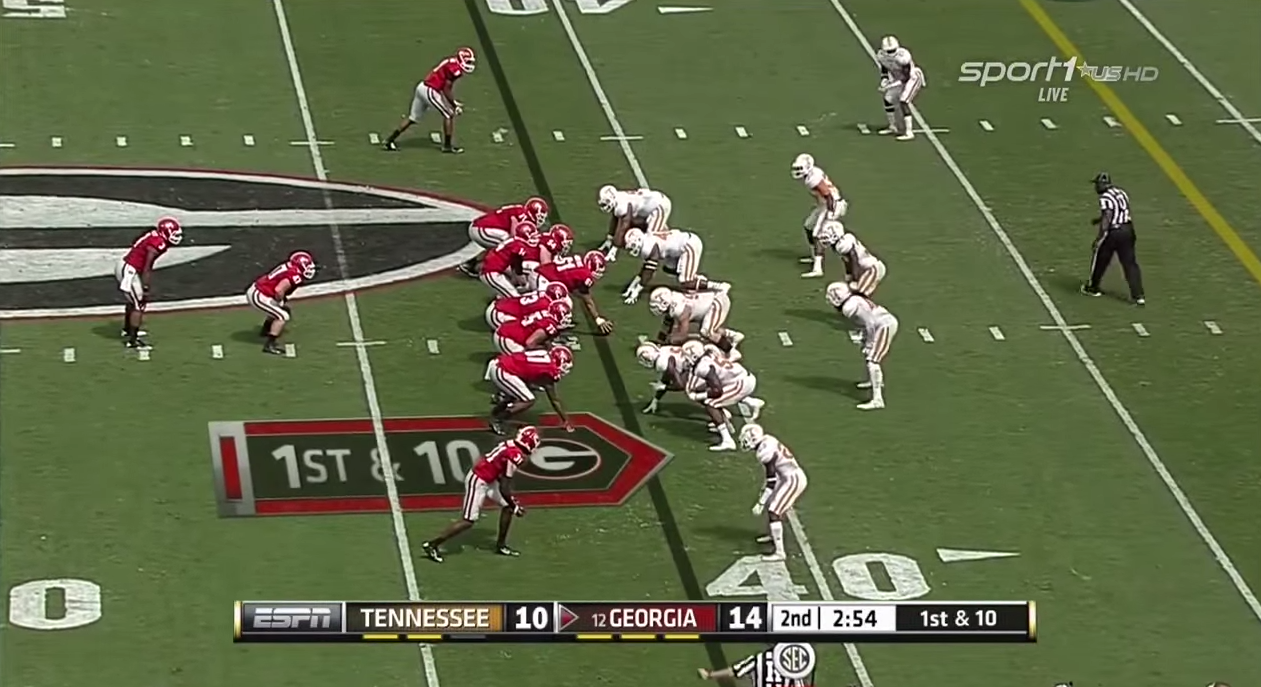 Sutton loves to play in press coverage. Tennessee has shown that it likes to run what you see above, where Sutton is locked on the opposing team's No. 1 wide receiver at the line, while the secondary corner on the other side is playing off coverage and the free safety leaning more towards his side with help. Florida likes to run bubble screens to get the ball in the hands of receivers early and help them make plays. This probably won't work against Tennessee's defensive speed and tenacity, so they'll have to find another mismatch to create.

Though Sutton is initially on the side of the team's top target, Tennessee doesn't seem to use him to follow that receiver around; they just want to make sure he's in the area to start. The way Roper can counter Sutton's style is by using crossing patterns which force him to stay in his Cover 3 zone after attempting to jam what would be Robinson at the start of each play. Crossing routes across the field would surely force the Vols to play more out of the nickel formation than their 4-3 Under, and it's then that Florida can attack with the power run game. This game may reqiure a pass-to-open-up-the-run kind of game plan from Florida.

Tennessee's safety play leaves much to be desired from Brian Randolph and LaDarrell McNiel. McNiel is the bruiser, the man who will be up most in run support, but that doesn't make Randolph an elite deep coverage man — it just makes him the free safety by default. There are too many mental errors on tape in the Georgia and Oklahoma games where these two have taken bad pursuit angles in coverage and when tracking a ball carrier. The key to beating these two, again, is speed. I think Florida needs to use Andre Debose as more than just a screen player in this contest. His legs could hold the key to a lot of success over the top of the defense.

Hunter ended our conversation with a game plan for Florida's offense, a prediction and an interesting quote.

He first said Florida will win if they can be one of two things: Efficient or explosive. But, he quickly said his prediction for the game was a 24-27 to 20-17 win for Tennessee because of those two necessities.

Driskel's certainly been anything but efficient this season, with just a 45 percent completion percentage in his last two games, as well as a 34 percent conversion percentage on third down. Unless that drastically changes on the road against the nation's best third down defense, you can rule efficiency out, though crazier things have happened. As for explosiveness, outside of Debose, Florida doesn't seem to have an electrifying weapon. Muschamp has, in fact, turned this program into a a power team, and the lack of Powell may actually matter on Rocky Top.

Those two variables and conclusions left Hunter with this quote: "I’m just not scared of Florida anymore. They’re too slow, everywhere."

"I don’t know what happened to that team."