Florida's Treon Harris saved the day for the Gators on Saturday. By the end of the night, he may have committed a crime far more serious.

Share All sharing options for: Treon Harris being investigated in alleged sexual battery, suspended by Florida

Here is the sequence of events that is unfolding in Gainesville today:

Florida has postponed/canceled its Monday football media availability. "Will reschedule this week."

What I'm hearing about the Gators, if true, doesn't sound good at all

3. FLORIDA TODAY's David Jones noted the rarity of a press conference being cancelled.

In 20-plus years #Gators beat, this is first Monday press conference called off. Used to be Tuesdays. Even had one on 9-11. Not good.

4. Everyone freaked out. Or made "jokes."

Uh oh. RT @APMarkLong: What I'm hearing about the Gators, if true, doesn't sound good at all

Yesssssssssssssssssss today is getting better. RT@APMarkLong: What I'm hearing about the Gators, if true, doesn't sound good at all

To be fair, you could tweet this almost every day. RT @APMarkLong: What I'm hearing about the Gators, if true, doesn't sound good at all

I am hearing from my sources at @Sears that there is a national jorts shortage. This is why Florida canceled press conference.

Something big about to happen at UF. Regular presser canceled.

6. Everyone wondered what the hell was going on. Sources were confused.

7. Dave Jones dropped the bomb: Treon Harris is "being investigated" in a "legal matter."

Gainesville source has confirmed that #Gators quarterback Treon Harris is being investigated in a legal matter.

No charges have been field against Harris yet. #Gators

Jones also reported that this does not involve the future of Will Muschamp.

Team has been told Harris is suspended and team will be addressed at practice.

9. Jones published an article on the matter.

The source, speaking to FLORIDA TODAY, confirmed that Harris in all likelihood will be suspended from Saturday's LSU football game.

The latest posting of UPD's Crime Log. No names listed on this one unlike GPD's. http://t.co/gcI7SaMH04 pic.twitter.com/Ps4PdzKCRo

The Springs Complex is where the majority of UF athletes who live on campus live. Harris, likely living on campus as a freshman, is very likely to be a Springs resident.

That, of course, does not mean that there's any connection between that incident and Harris.

Per our newsroom, Gators QB Harris suspended over incident in which campus police were called Sat. night. More details developing.

That would be at odds with an incident report from late Sunday night or early Monday morning.

We have a screenshot. 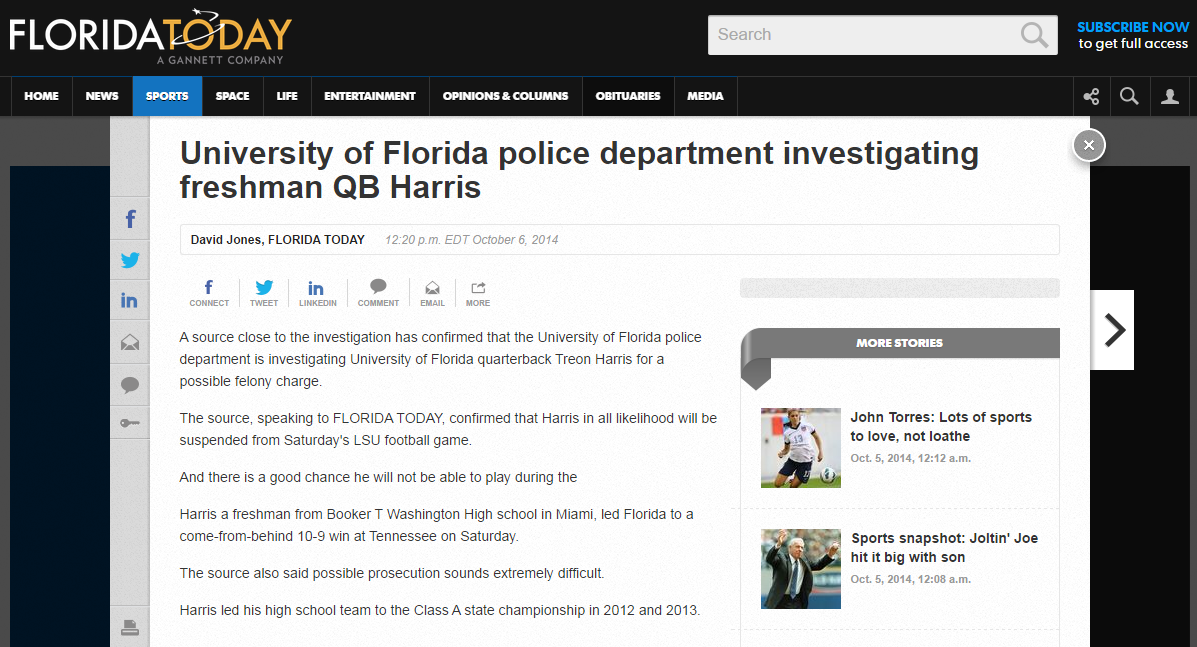 13. WUFT, UF's on-campus TV station, reported that Harris's investigation has to do with an encounter with a female student.

Certainly, and sadly, this is starting to sound very much like sexual assault, sexual battery, or rape.

As in, a certain line has been cut:

One line in particular has been cut: "The source also said possible prosecution sounds extremely difficult."

15. Florida has released a statement.

16. Jones reported that a source told him this is a "he said, she said" case.

Sources said this is a "he said, she said'' case. UF pres. Bernie Machen: "We have no tolerance for sexual assault on our campus.'' #Gators

Powell sent this and deleted it with an half-hour.

18. Yahoo! Sports's Pat Forde reported that no arrest has been made, per UPD.

Treon Harris attorney Huntley Johnson: "No, he has not been arrested and I don't expect him to be." #Gators

21. GPD clarified its role in this case.

The Gainesville Police Department’s Forensic Crime Unit has been asked by the University of Florida Police Department to assist in collecting possible items of forensic evidence on UF campus related to the recently-announced investigation of Treon Harris.

The only role of the Gainesville Police Department at this time is with the Forensic Crime Unit.

This is serious. Be serious about it here, or you will be made to be childish about it elsewhere.