Treon Harris did enough to help Florida beat Tennessee. But he wasn't all that much better than Jeff Driskel, if we're being honest. And that leaves the Gators in a bind.

Last Saturday, Florida was able to make it 10 straight victories over Tennessee in the latest chapter of the two schools' historic rivalry. Most Gators really think they got away with one, and most Volunteers think they let one get away.

So what happened, then? How was it that Florida was able to end up on top, and if Tennessee had the game so well in hand, why was the score only what it was, just 10-9?

Certainly, a big reason for that was Florida freshman Treon Harris giving the Gators an emotional steroid at the end of the game in relief of a struggling Jeff Driskel. But given Harris's involvement in recent events off the field, it's hard to figure out what Florida can build off of from his efforts in the comeback win. There were components to note on what worked and what didn't from both Florida quarterbacks that can be taken into the Gators next game versus LSU, even if they'll only have one of those two quarterbacks to execute them.

I encourage you to go back and read our breakdown of the Volunteers defense before reading this reaction piece, since most of what I'll be referencing involves what Tennessee brought to bear schematically and in terms of personnel.

To begin, we must first emphasize Florida's play calling.

Florida opened up the game with a great counter to Tennessee's lack of size up front. With only one player over 300 pounds on the defensive line rotation, Tennessee's 4-3 Under opens a vulnerable spot up the middle. On this, the second offensive play of the game, Driskel flies Kelvin Taylor out wide to get Tennessee MLB A.J. Johnson out of the box, knowing the play is a designed run up the middle.

Driskel picks up the first down and more thanks to great push right up the center of Tennessee's front line. This was a sign of a well-prepared Kurt Roper.

On the next play, Driskel attacks yet another weakness of Tennessee's front seven: Speed off the edges. 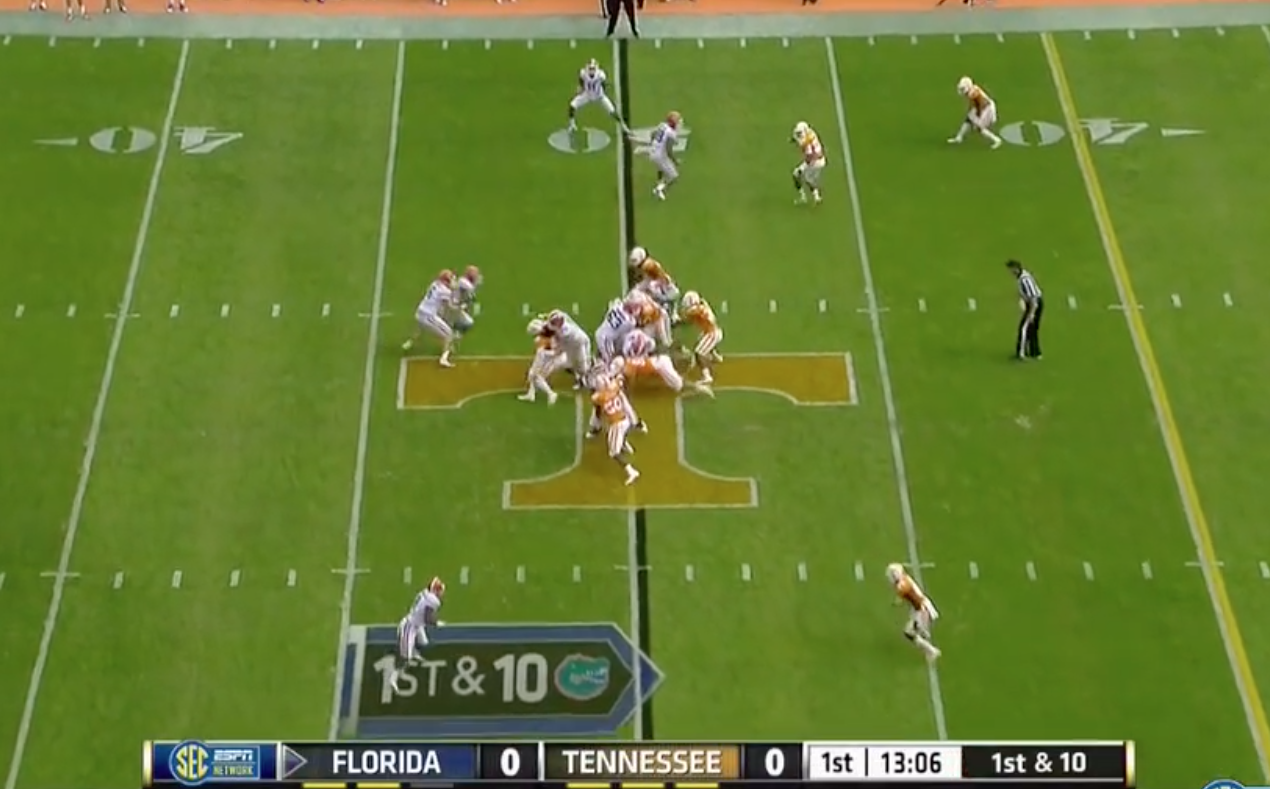 Tennessee's defensive strategy is to compensate for its lack of size with more bodies and fast pursuit to the ball from all 11 players. One way to counter that is an effective read option.

Here Driskel again does a good job of recognizing the collapsed trench, bounces it to the outside, and gains a nice seven yards to set up second and short. With the strong safety away from the box at first, he's too late to stop anything for a minimal gain even though you see him rush in from the right side. This type of success was most prevalent during Florida's first drives of each half.

So: Yeah, we get it, Driskel can run. We already knew that. But did he improve at all in the passing game?

All great quarterbacks needs to be able to show two characteristics on any given play: Good instincts with decisions and touch on their passes. Driskel's shown his instincts are improving from year to year, but he still can't put touch on the passes that need them.

The above video shows what I'm talking about. Is the window small? Yes. Does he need to make sure he leads Pittman enough to where only his receiver can get it? Yes. But does he also need to be able to moderate his arm strength to deliver a softer ball to a player who has loads of open field in front of him? Yes, as well.

Driskel has the arm talent and improving instincts for Roper and Will Muschamp to continue to believe he'll eventually get his accuracy under control. But that's just the thing: Repetition can teach accuracy; it's much harder (if possible at all, for some) to teach touch. His potential in Muschamp's head might be masking reality.

This is another touch pass that simply cannot go for this kind of incompletion. It'd be one thing if passes like this were few and far between, but they're not.

The nail in the coffin for me as it relates to Driskel's play against Tennessee was this pass.

One common critique of Driskel is that he doesn't scan the field often, or go through progressions; as I've noted before, I don't think Roper's offensive play calling is meant for him to go much beyond one read. I haven't seen many plays that combine longer-developing routes with shorter ones to create the need to hold the pocket for four or five seconds. Roper is trying to get the ball out of Driskel's hand in a hurry.

However, on this play, we see Driskel's first read go down and see him scan the field all the way back to, oh my, an open receiver on the opposite side. He lets the ball fly ... and the path of the ball could not be more disappointing. Defensive playmakers can excuse some missed chances, but an errant throw on a clear-cut opportunity to have an explosive play? That's a "you problem."

As much as Driskel helps the game plan with his legs, he hurts Florida in crucial situations with his arm too often — and I'm not even talking about any of the interceptions.

Now let's get to why you're all here: How Treon Harris was able to hoist this team and grab victory from the jaws of defeat, how he can would have saved the Gators' season, how he is everything we wanted him to be (on the field).

But, well ... would you hate me if I said things weren't that different with Harris in?

First off, the game plan didn't change; Harris and Driskel are in the same vein of mobile quarterback, and Harris appeared to be running a slimmed-down version of Florida's offense. What did change on Harris's first drive — the touchdown drive — was how Tennessee approached Florida.

Here, Tennessee stacks the box with seven players. From the snap, Harris rolls right while Jones goes across the backfield and into the flat. Have you ever played sports against someone you think you're much better than, gotten lazy, and overcorrected to make a big play? That's what Tennessee's linebackers do next.

All three linebackers want the sack or the interception; they're sure it's coming. Then, all of a sudden, Jones is off and loose. Harris calmly turns his body (knowing this was the play design) and delivers a soft pass for a first down. The rest of that drive was a heavy dose of Matt Jones and a good inside QB draw from Harris for 10 yards.

Especially with Harris sidelined indefinitely, we have to ask: How much of that could Driskel have done? Well, all of it. Could Driskel have pulled off that touchdown on those exact same plays? I think so. However, I don't think Tennessee plays the kind of defense it did on that drive if Driskel is in the game. I really think the Vols players wanted an easy game-ending moment against a freshman and lost focus.

Then we go to the longer drive that ended in a field goal. Harris had a nice pick-up on third down, but it was a very conservative drive, most of the success built off Jones's 32-yard run. That led to Florida taking the lead, and you know the rest from there. There just isn't much to evaluate about Harris's play.

Overall, my thoughts on Driskel vs. Harris are this: Not much changed on Saturday. What did change, however, was important: Harris delivered two soft passes for first downs when he really needed to. Even though it was a small sample, Driskel's had the chance to build a large samples of good passes on third down and hasn't been able to all season, including in this game. Running speed is about the same for both players, though I noticed more of a quick, "burst" style from Harris, which, I guess, comes down to the design of the run.

Not much of this debate matters, since Harris almost definitely won't be playing against LSU, and no one knows if he even plays again this season, or at all, for Florida. For now, Florida will have to move forward with Driskel and only Driskel.

You've heard it one million times and I know you're dying to hear it again: Driskel's talented, but if he can't turn potential into production, Florida probably can't beat good teams. He hasn't shown it yet this year and LSU, even in a down year, isn't a good opponent for trying to correct mistakes.

And mistakes could be devastating to this Florida team.