Video: Patric Young's best rebound ever, and what it means

Patric Young did more than save Florida with his flying rebound last night: He finished his metamorphosis into the player he was always meant to be.

Share All sharing options for: Video: Patric Young's best rebound ever, and what it means

Patric Young had six points and five rebounds before this incredible flying rebound from Tuesday night, in Florida's 67-58 win over Tennessee. He finished with six points and six rebounds, and fouled out about a minute after getting it.

But that rebound â not Young shaking thunder loose from the heavens on an alley-oop or a follow dunk, not a highlight-reel block, not a smooth hook in the lane â was the most important, most impressive, and best play of Patric Young's basketball career. 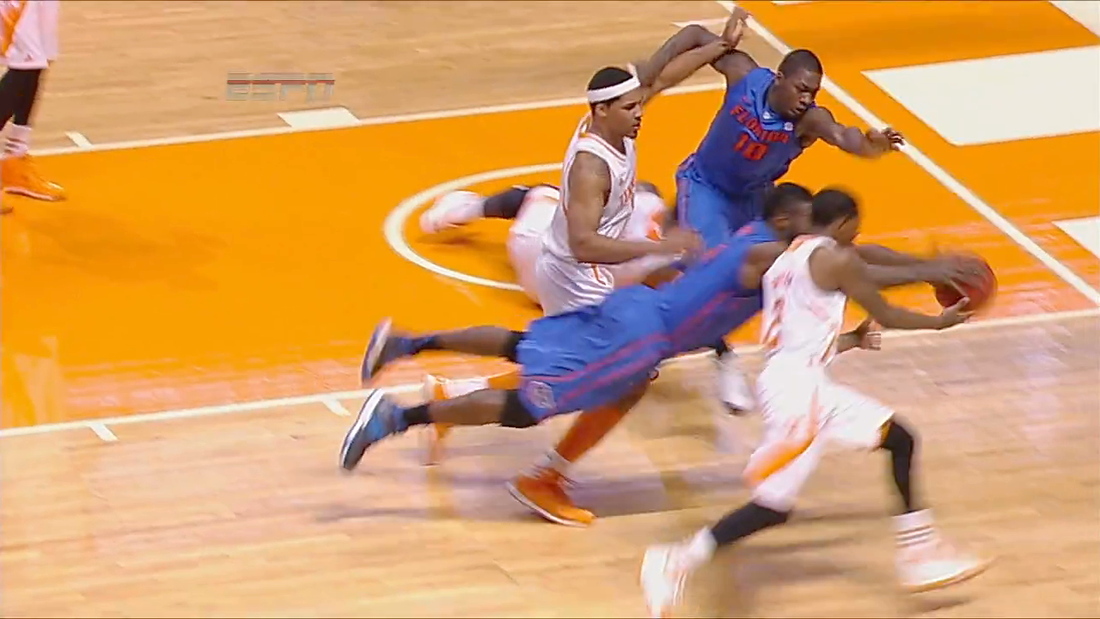 It didn't make SportsCenter's Top 10, which probably made Young smirk; he's jokingly needled ESPN about its seeming inability to show Gators highlights over the last two years. But he's used to not making the highlights, and also seems to have almost fully foregone hunting for them, instead focusing his attention on making every play he can to help this team win. Billy Donovan praised him for that much last Thursday, during a radio call-in show.

Donovan: Patric Young cares about UF and his teammates. Now comfortable being the best he can be, not comparing himself to others.

"Fear is for everyone else"

Maybe, after spending years fearing failure and disappointment from teams almost this good for so long, there's nothing for us to fear about these Gators.

"Fear is for everyone else"

That wasn't always the case, and Patric might be the first to admit it. Those development goals we chatted about on Twitter in 2011 were about him more than his team; the games in which he got fewer offensive touches in 2012 and 2013 were usually ones in which he gave less effort on defense; the blocks and dunks have often been showy instead of substantially helpful. He's pouted his way through injuriesÂ â man, the subliminal messages from Donovan about Young's injuries over the last two years â and hidden from barbs on Twitter, been benched and been challenged.

But, after it all, he's responded and grown, and he is finally as fully realized as he will get at Florida. He is not the world-devouring frontcourt beast everyone, Young included, hoped he would be. He and Florida might be better off for it, in some ways â it just so happens that his role is as a smart, muscular, relentless glue guy, the kind of player who can feel like he deserves to win thatÂ Lowe's Senior CLASS Award he was named a finalist for on Wednesday, and that Florida needs that guy more than a ball-stopping 25-and-10 fixture down low. (You can vote daily for Young to win the awardÂ here.)

This was Big Pat's first comment on last night's play: