You're going to be absolutely inundated with news today, with the Gators in the thick of things for several prospects on National Signing Day. We're going to do our level best to keep you updated on everything as it happens — with quick, smart context that you can't get anywhere else.

Keep this page open all day long as we update with links, and I promise you won't be disappointed.

3:08 p.m.: Adoree' Jackson has picked USC, Lorenzo Carter is surely heading to Georgia, and there's no one else left to hope for without a time machine.

So it's time for some real talk.

No, Florida did not close as well as it could have, partly because it was trying to close with two of the best players in the country, and pull them both out of extreme enemy territory: Damian Prince is from Maryland, and had Mike Locksley draped all over him, plus his family means a lot to him; Jackson was the star wide receiver at a high school that has been the pipeline for two of the last three great USC wide receivers, and never did make it back to Gainesville. Florida's other "miss" today is Carter, who was essentially not in play at any point after Florida lost to Georgia. Or to Vanderbilt. Or to Georgia Southern. (It's hard to tell.)

But Florida really was in play for Prince, and Jackson, and for Dalvin Cook and Ermon Lane and Chris Lammons and a lot of other very, very good football players, and was more than in play for Jalen Tabor, Thomas Holley, Gerald Willis, Kavaris Harkless, Ryan Sousa, C.J. Worton, Brandon Powell, Drew Sarvary, David Sharpe, and Andrew Mike, all of whom were principally or totally recruited and/or signed after Florida had its worst season in three decades. Those guys signed with Florida despite two Gators blocking each other during a home loss to an FCS team that did not complete a pass being the reigning champion on SportsCenter's Worst of the Worst segment for more than two months.

We can be mad that Muschamp hasn't delivered the results on the field we want, and has missed on a slew of elite prospects over his four recruiting classes, and we sure as heck will be. We can whine about the results on the field not being commensurate to the recruiting rankings and stars, and I know we will. But, I'm sorry: Muschamp et al. have done their damnedest to make sure that Florida will not break, and dozens of young men have chosen to play football and learn some stuff at the University of Florida despite a record that we don't find palatable.

I think there's some joy and pride to take from that.

And now we wait on Lorenzo Carter (to commit to Georgia) and Adoree' Jackson (to maybe break our hearts). Signing Day!

10:15 a.m.: We're going to enjoy having Gerald Willis's mother in our lives for his Florida career, I think.

10:08 a.m.: I really like Florida making this National Signing Day a big deal.

For folks on campus, signees will be added to the big board in The Swamp when letters are verified. #Gators14 pic.twitter.com/FG6YxReeGg

9:25 a.m.: Here's David Sharpe "singing" his National Letter of Intent. (Click through to the Instagram page and you'll get it.)

9:20 a.m.: I really like these Instagram videos Florida is rolling out for each signee. Here's Quincy Wilson's.

8:20 a.m.: Florida target Isaiah McKenzie committing to Georgia might actually be a good thing for a couple of reasons.

First, and more immediately, McKenzie and C.J. Worton were both probably up for the same spot in Florida's class. McKenzie committing to Georgia makes it very likely that Worton will be a Gator, I believe.

Second, and perhaps more importantly, McKenzie's skill set is very similar to Florida target Adoree' Jackson's skill set, but Jackson has elite, Deion Sanders-like athleticism, while McKenzie is merely ("merely") really, really elusive. Florida would probably have needed and pursued McKenzie more if it did not feel as good as it does about its chances with landing Jackson.

some good news is coming for UF

I think it's a slushie-and-crab cakes food truck.

Observation: There are not 16 songs that one can tweet out in this manner.

7:26 a.m.: Quincy Wilson reflects on his commitment on Instagram.

Sitting back thinking how blessed I am. Not everyone gets this opportunity. Tunnel vision to the money #SigningDay #GatorNation

Meanwhile, our thoughts on what Wilson will likely do for Florida. 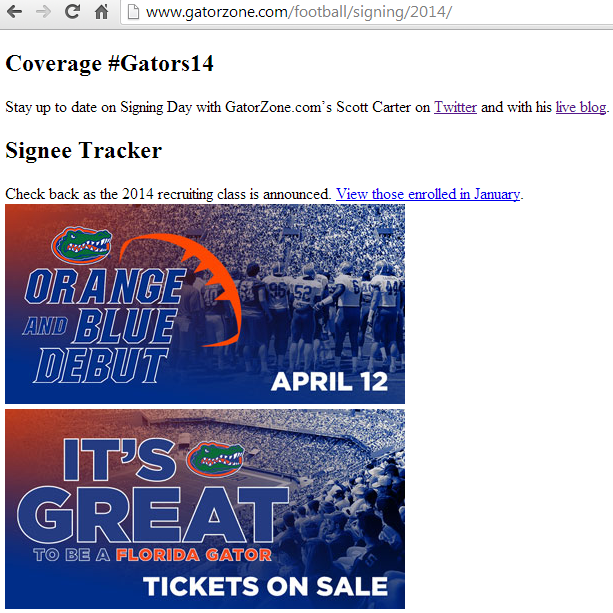 7:08 a.m.: 247Sports' Luke Stampini reports that Quincy Wilson is the first Florida commit to fax in his National Letter of Intent.

Quincy Wilson the first NLI in for #UF http://t.co/DGVWXKgl8F

Who else could it have been but Wilson? No other Florida commit has been as vocally enthusiastic about being a Gator.