Florida's first NCAA Tournament opponent will have to win a game on Tuesday night before playing the Gators. Will it be Albany or Mount St. Mary's?

I know a lot about college basketball because I've watched a lot of college basketball this year, and write about it, and ... you get the point. But I don't know much about Albany beyond its hideous road uniforms with shorts that are purple in the front and gold in the back, and I know even less about Mount St. Mary's.

In search of a better perspective on Florida's future round of 64 opponent in the NCAA Tournament, I turned to Mid-Major Madness, and specifically Stephen Gertz, who graciously answered a handful of questions on tonight's First Four clash, one you can catch on truTV at 6:40 p.m. Eastern.

Florida's got a really solid team with no glaring weakness, and some minimal concerns about perimeter defense and free-throw shooting. Which team would better exploit those weaknesses — and which team should Florida fans be rooting against tonight?

Florida fans don’t need to root against Albany or Mount St. Mary’s tonight. There simply isn’t a lot that a No. 16 seed is going to be able to continuously and successfully execute against an overmatched opponent like the Gators.

"It's really going to be about who can force who into playing at a pace they are most comfortable with."

A contrast in styles

Albany wants to go slow. Mount St. Mary's is fine at a fast pace. Which style wins out?

"Old School vs. New School" A contrast in styles

The Mount is better equipped to exploit Florida on the perimeter. They can put four shooters on the floor at any given time, and every one of their guards has the ability to put the ball on the floor.

The Great Danes' uniforms are pretty putrid, though, at least the road ones, so I’d be rooting to not have to see those for 40 minutes. That’s the best I got.

Both teams are probably better than Jackson State, but that might be because this Gators team isn't as offensively prolific as the '07 team, in my opinion. Both Albany and Mount St. Mary's were the No. 4 seeds in their respective conference tournaments, so they weren't the class of their conference.

With that said, I think the Great Danes will play at an extra plodding-pace, which might make them hard to blow out. MSM can shoot a lot of triples; if they don't connect, it could get ugly, but if they do, they'll make it respectable.

If Albany advances, what will Florida fans need to worry about most?

If Albany advances, they won’t be able to hang with UF for very long. The Great Danes like to slow the game down, but Florida plays at the exact same pace (63.2 possessions per game). For a mid-major, they don’t take a lot of triples, so they won’t have that equalizer on their side, either. Junior forward Sam Rowley is probably their best player. He is very good inside, and in my preview for the Albany vs. MSM game, I wrote that I personally watched him give a physical Pitt team some fits in the early going.

They don’t foul, so I wouldn’t expect a lot of points from the free-throw line. They have some decent guards in sophomore Peter Hooley and senior point guard DJ Evans; both can connect from beyond the arc if left open. Bottom line: If the Gators control Rowley and not allow Hooley or Evans to get open looks from the three-point line, it will be over before halftime.

A Q&A with Julian Norfleet 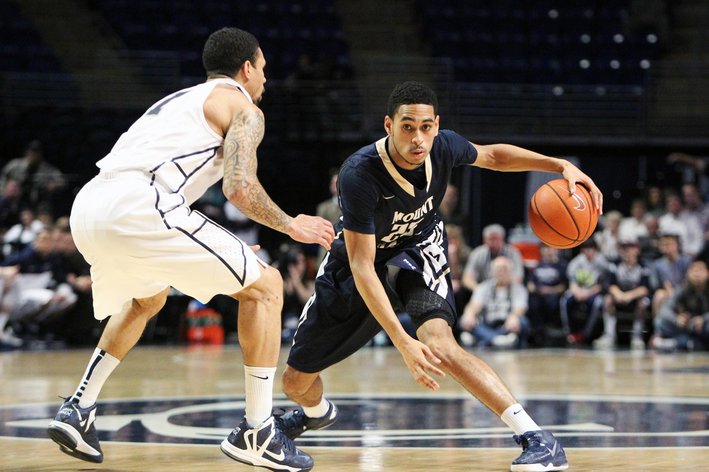 If Mount St. Mary's advances, what will Florida fans need to worry about most?

Should the Mount advance, they’ll present a different challenge. For starters, they have three exceptional senior guards in Julian Norfleet, Rashad Whack, and Sam Prescott. Each brings something different to the table, and the trio can finish from any spot on the floor. Head coach Jamion Christian isn’t a household name, but he was an assistant at VCU under Shaka Smart, so he knows how to bring pressure.

UF is going to have an advantage inside, and if they can handle the on-ball pressure from the MSM’s guards, then it shouldn’t be too much of a challenge. Christian's team runs over 150 different plays over the course of the season, and they'll mix-it-up they play Florida.

Is there a sentimental favorite tonight, or a good reason to root for one team over the other? Is there a good one apart from Albany knocking Vermont out of NCAA Tournament consideration, and turning the Catamounts into Honorary Florida -- they play Georgia and could play Florida State or Florida Gulf Coast -- in the NIT?

Well, as I said before, you probably don't want to see the road uniforms of the Great Danes. I covered the NEC for the entire season, so I have a rooting interest. However, Albany's head coach Will Brown was spectacular in his post-game press conference against the Panthers. Rowley is also Australian and has a sweet accent. So, if you're attending the game and want to be entertained after, vote for the Great Danes. But, if you'd like to watch VCU-lite, also known as 'Mount Mayhem', then cheer for the Mountaineers.

Who wins tonight, and why?

KenPom has this at 52% in favor of Mount St. Mary's, and I'll agree with that. Albany has trouble with turnovers as is, and the pressure from the Mount will cause more then a few. It will be a battle of contrasting styles, but I think MSM prevails, 65-59.