Florida's seniors got a full-throated sendoff from their adoring fans on Saturday. Then the Gators sent off Kentucky with a fantastic first half and the kind of close we've come to expect.

If there was a dry eye in the O'Connell Center as Florida's four seniors were announced and celebrated in a pregame ceremony on this Saturday, it wasn't mine.

It wasn't for lack of trying. I really did want to hold it together. But when Will Yeguete walked out — after Casey Prather, after Scottie Wilbekin, before Patric Young — with four-year-old Kaedyn Ballew, who has forged a beautiful bond with Yeguete, the tears that were welling fell.

And on the floor, all four Florida seniors were visibly emotional — not choked up, not teary, but certainly happy and proud — for their final introductions to a sellout crowd of Gators who have come to love them as unconditionally as they love each other.

But after that moment, it was Florida's turn to make the other team cry. Again.

The Gators burst from the gates strong, as they have time and again this year, but Kentucky matched Florida's intensity for the first four minutes, and made it to the under-16:00 media timeout trailing 12-8. Florida held the Wildcats scoreless for the next four minutes while putting together a 5-0 run, but that was followed by a Kentucky counterpunch to cut the Gators' advantage to 20-16.

From there, Florida took off.

The Gators went on an 11-0 tear over the next 3:34, then extended it to a 24-6 run that spanned just under seven minutes and landed the Gators a massive 22-point lead at 44-22 with 2:51 to go. And everything was working save a few audacious alley-oops, even without Wilbekin, sitting thanks to foul trouble. Florida shot a stunning 61.5 percent from the field in the first half, making seven threes, and held Kentucky to a miserable 34.5 percent.

The Gators would close the half up 21, at 49-28 — a football score put up by a program that has helped make Florida's reputation as a "football school" alone a thing of the past. The standing ovation the Gators got for that 20 minutes of play, as good as any half of basketball I have ever seen in person, was well-deserved.

But Kentucky is and will forever be a basketball school, and happens to have a decent basketball team, albeit one that has underachieved and been undone all year. And the Wildcats flexed their muscles after halftime.

After both teams scored four points over four possessions to start the second half, Florida called a 30-second timeout up 53-32. Kentucky went off to the races immediately after, uncorking a 15-0 run that took just over five minutes, and featured the Wildcats' thoroughbreds at full lather. Five Wildcats scored over that stretch, and the points came on four layups, a dunk, two free throws, and a "jumper" by Dakari Johnson.

At 53-47, what was once a rout was a game again, and Florida had been knocked from the perch it scrambled to in the first half.

Then the real Scottie Wilbekin showed up.

When he returned for the second half, Wilbekin was rusty and tentative. He missed three jumpers and turned the ball over on a travel while Kentucky mounted its charge, only scored on a pretty and unselfish assist from Yeguete under Kentucky's basket, and looked both tentative and tense in equal measure.

When he uncoiled, and launched a leaning three that went down to extend Florida's edge to a nine-point lead and end the Wildcats' run, I had a feeling things were going to be just fine.

And things — and the Gators — were: Florida never led by fewer than eight points after that Wilbekin three, and would finish the 'Cats for good with a 14-3 flourish that turned a 65-57 advantage into a lopsided 79-60 score, and sent the hundreds of Kentucky fans in attendance, briefly boisterous early in the second half, silently streaming to the exits long before Florida fully wrapped up its 84-65 victory.

On Senior Day, it was Florida's seniors' day. Wilbekin finished with 13 points, all in the second half, and drove a stake into Kentucky's heart with a three that put Florida up 17 with 2:33 to play. Young had 18 points and seven boards despite being stuffed by the rim more than once on alley-oops. Prather scored 15 points on five shots, all makes, and five free throws, and helped that 14-3 run along with a circus-worthy layup through a foul. Yeguete tallied five points and seven rebounds, and punctuated a day he spent playing workhorse defense against Julius Randle (16 points, 10 rebounds) with a dunk immediately after Prather's layup.

Florida's four seniors scored the Gators' first 28 points in the second half, and 31 of the 35 Florida would score en route to its 84-65 victory. Of Florida's underclassmen, only Hill, who had eight points and seven assists despite recording only one shot, would put the ball in the bucket in the second half.

After the game — after the announcements that Florida had finished 18-0 for the first time in SEC history and gone undefeated at home for the second straight year, after Wilbekin and Prather raced over to the fans to Gator Chomp for them, after Yeguete grabbed a sign that read 18-0 AND MORE TO GO, after Young thanked the thousands of orange-clad Florida fans for being "the best fans in the country" — Florida's extended basketball family finally cut the nets in the O'Dome.

Florida's players and coaches went up the ladder at one end of floor. The underclassmen went first: Michael Frazier II started the procession, walk-on Jacob Kurtz — who played in both halves, because Florida needed him and because the game was out of reach — got his piece down quickly, Chris Walker took longer to snip his twine than to bunny hop off the ladder, and Billy Donovan got the loud ovation he always gets.

Casey started the seniors off, and beamed at the top of the ladder with his bit of net. Scottie went next, head-faking before he descended to hold the rim and ask the O'Dome for noise for one last time. Will went third, and paused for a long moment at the bottom of the ladder before ascending, caught in thought or prayer — then rose, snipped, and held his strand out to every part of the crowd that remained. Pat, the one least likely to still be here, still be a Gator, climbed slowly, and took a moment at the top of the ladder to see the place he's called home for four years from an angle few have ever seen more often than he has for one final time.

They didn't cry then, or when Florida's support staff and managers cut the nets at the other end, and they didn't cry while meandering around the floor one last time, not that I saw. But Scottie, the progidal son, the youngest among them, the floor general to a fault, gathered them at midcourt one last time, pulling Pat away from one more interview — one he gave after the one Will wouldn't stop photobombing — for one last huddle.

They broke it, and went to the O'Dome floor one last time — not in search of a loose ball, or a steal, but a goodbye. As one, they kissed the floor. 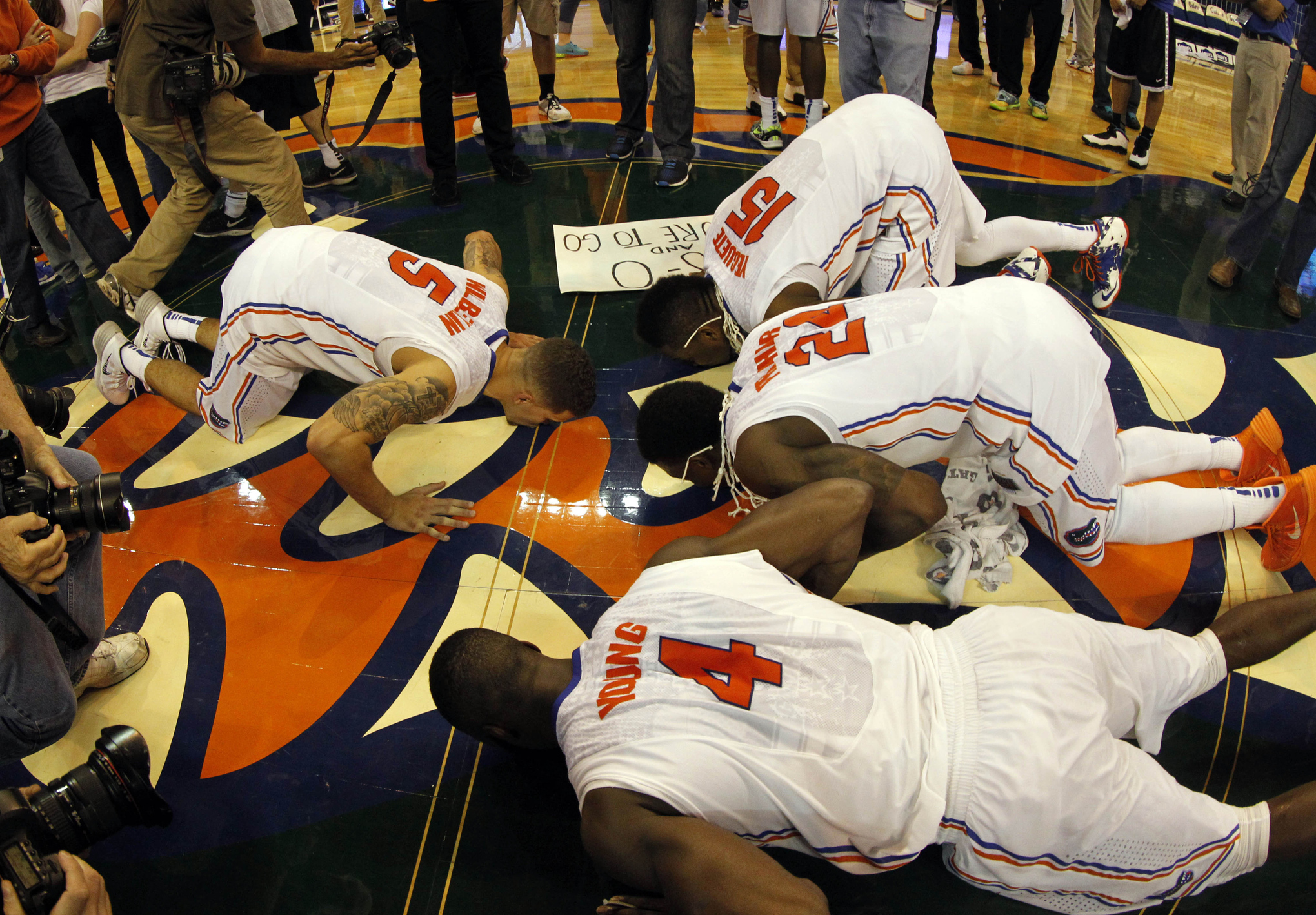 As one, they slapped it one last time.

As one, Florida's four greatest seniors said goodbye to the O'Dome the only way they could: With a win. Over four years, they earned every one of the 60 victories they enjoyed in that building.

Over three hours on this Saturday, they earned every tear of joy that fell in it.