Florida vs. Kentucky preview: Scouting the Wildcats defense with A Sea of Blue

Florida's facing a better Kentucky team than it usually sees on Saturday. And it starts with Mark Stoops's defense. But that defense might be poorly situated to stop the Gators.

Share All sharing options for: Florida vs. Kentucky preview: Scouting the Wildcats defense with A Sea of Blue

The Kentucky Wildcats have not beaten the Florida Gators in the game of football since the year Mike Tyson became the youngest world heavyweight champion of that time, since the inaugural year of the Rock and Roll Hall of Fame, and since gas cost an average of 89 cents per gallon.

The year was 1986, but I’m not here to tell you that for the millionth article in a row. Let the past be the past. This is 2014, and it’s a year in which Kentucky’s got its fastest defensive roster in quite some time, which could result in a good counter for spread offenses. But the question remains, how will Kentucky’s speedy defensive unit match up against the nation's No. 1-ranked, all-powerful, offensive juggernaut that is Florida football? (Somewhere, Bill Muschamp read that and passed out.)

To help us out, we sat down via the Internet with A Sea of Blue’s Will Marshall to learn the ins and outs of what UK will bring to Ben Hill.

In the Gators’ first game of the season against Eastern Michigan, Florida fans were introduced to the "forward pass" – pronounced FOR-ward PUH-hass. (All right, I’ll stop.) (I know that's not how you say pass, either.) Jeff Driskel had a career day, completing 31 of 45 passing attempts while connecting with 11 different receivers. With Florida now spreading the wealth through the air on a consistent basis, incoming opponents will have to account for more receivers with more defensive backs.

Luckily for UK fans, speed is something Kentucky has, and their secondary, according to Marshall, is the strength of their defensive. UK returns three starters who have steadily improved and developed under head coach Mark Stoops, an old defensive backs coach. The 'Cats were also able to sign JUCO FS A.J. Stamps and enroll him early — a coup, because he is now one of the top defensive playmakers on the team, and even has some NFL potential.

As we begin this film session, let’s go over what you’ll see from Kentucky’s defensive set ups.

Big Blue seems to have made the switch to a 3-4 base in 2014, using Bud Dupree (their best defensive player) as the SAM DE/LB, giving him the freedom to play with his hands on the ground or standing up. But in passing situations, they vary from a 3-3-5 to a 4-2-5, emphasizing defensive backs while rotating the look of their front seven base by lining Dupree in multiple roles. That should again tell you where the strength of this team is: Kentucky is not afraid to give up power in the front seven because they believe having five defensive backs on the field is to their advantage.

The above image is the 3-3-5 formation, the first set you should see Kentucky play from, since Florida's run game is so strong (we'll get to that). In this case, the fifth DB is a nickel corner, instead of what could be a third safety.

Kentucky likes to use Cover 1, which traditionally means the strong safety, Ashley Lowrey, would shift down to the linebacker layer; in that role, he would reproduce a seven-man box. His assignment would either be to guard a slot receiver or tight end in man coverage, or play damage control in the short field or flats, should the running back possibly go out for a route.

But this Kentucky team does things a bit differently. Instead of rotating their strong safety down to the box as teams normally do to get their better-tackling safety in a linebacker position, UK will rotate down with their nickel corner and will shift their strong safety into a man coverage role. This is something Florida constantly did with Matt Elam.

Trusting its nickel corner and free safety to not only man up with a receiver, but drop down into the box is what makes Kentucky's defensive unit stronger this year than in years past. Their defenders are reliable tacklers in the open field, and this allows Stoops to add speed without losing the necessary skills for stopping the run. 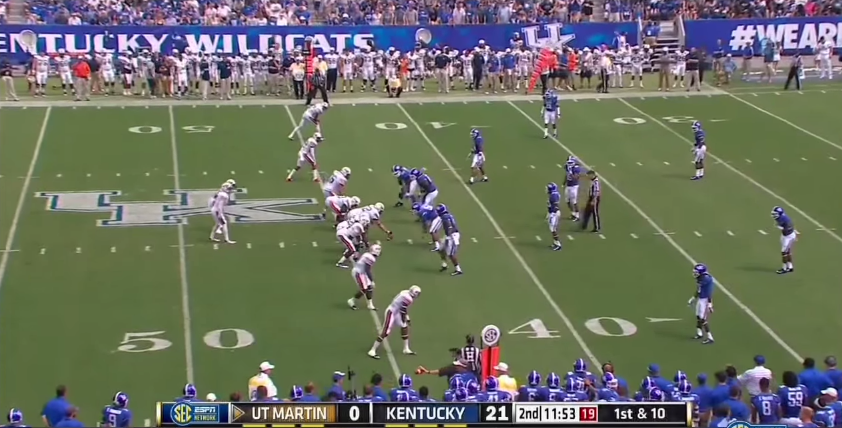 In the two games we've seen from Kentucky so far this year, I've rarely seen them in press coverage. The above image shows a four-receiver set with Kentucky's defensive backs giving UT Martin's receivers a lot of space. Off coverage is the standard when dealing with spread attacks, but Florida OC Kurt Roper exploited Eastern Michigan with a slew of quick throws at the line of scrimmage.

This can be costly for a team that relies too much on off coverage. I'm not saying Kentucky has to press to have success, but if Roper can disguise those short pass designs, UK could get burned with a lot of yards after catch.

We know speed is the key for Kentucky's defense, but speed can sometimes leave teams vulnerable to good rushing attacks — in Kentucky's case, it does, and that's not good for them. To give you an idea of what we're working with, UK's starting middle linebacker, Josh Forrest, is a converted wide receiver.

It's not that their linebackers can't tackle or don't have strength; it's that their entire front seven can't get consistent push at the point of attack. Marshall noted one of the weakness of this team is at defensive tackle, a 5-tech role in Stoops's defense. Marshall said starter Mike Douglas isn't bad, but he's just not experienced. And if defensive tackles can't win their gaps in a 3-4, that leaves big holes, especially on a team whose linebackers are a weakness.

Kentucky is already coming into its matchup with Florida as the ninth-ranked rushing defense in the SEC, and that might not bode well going up against a team with four running backs averaging over eight yards per carry. The 'Cats will likely try to attack Florida's rushing game with that 3-4 base, using Bud Dupree right at the line of scrimmage as a stand up linebacker.

To me, that's bad news for them. If that formation is the standard — which it is — Kentucky may be letting Florida's offensive line dictate where the play develops as opposed to getting immediate disruption. 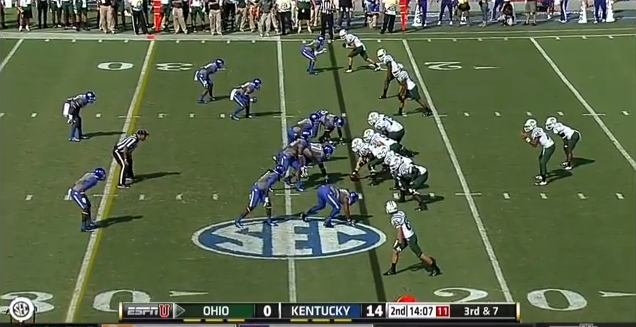 The image above shows how I think Kentucky is going to have success against the run with just three down lineman. The linebackers in the middle are close to the line. They'll read what the quarterback is doing on a play action, and their assignments will go as the running back does into the flats.

It turns out this play was a blitz package for the middle linebackers. The running back ran out in motion and one of the two MLBs followed. However, it still allowed for four players to attack the line of scrimmage and allowed Dupree to stay on a delay blitz, giving him time to read the play.

Does it leave them more exposed in the middle of the field if it is a pass play? Sure. But Kentucky's defensive backs are going to have to collectively win their assignments anyways if they want to have a chance against Florida.

Finally, and as is the most case with football games, turnovers will tell the tale. I expect Florida to rush for 200-250 yards as a team, but there's not much Kentucky can do against that as long as UF's line holds up — they just play too far off the line to dominate on running downs.

What Kentucky is going to have to do is capitalize off any possible turnover, and the 'Cats have the ball hawks to do so. I expect most of Florida's first few series to be exposing the cushion UK's defenders will be giving them. This should open up the field for longer plays, and it's there that A.J. Stamps and company will have to make plays, like so:

In the end, Florida's roster is superior to Kentucky's when it comes to winning in the trenches. Though speed is a good asset, it's not ideal when facing a team that can run it down your throat. Kentucky has good talent on the defensive side with Dupree, Stamps, and even Za'Darius Smith off the edge, but I'm not sure their style of play can contain Florida as much as it would need too.

Marshall ended our conversation by predicting a 28-10 UF win.

I think UK's defense plays pretty well, but will concede a big play or two by virtue of UF's superior class of athlete. I think what will break the game open are UK turnovers. This will be the first true test for Patrick Towles and it feels like he is due for a 1-2 interception game. I think those turnovers, with corresponding field position, make what was a competitive game with a UF edge, a much more manageable win for the Gators.

He notes Kentucky still isn't in the same defensive tier with 'Bama, Florida, LSU or Ole Miss, but he did say he would move UK into that second tier with Auburn, Georgia, and MSU. After breaking down the 'Cats roster, and seeing how they play on film, I would have to agree — and I think Kentucky has their best chance in years to end the streak.

But best chance doesn't mean that they will.