Florida vs. Kentucky, Monday Morning Film Study: The sky is not falling

Share All sharing options for: Florida vs. Kentucky, Monday Morning Film Study: The sky is not falling

The Monday Morning Film Study is a new feature from Trevor Sikkema that will examine some of the key concepts from Florida's games. It will run on, er, Monday mornings. Probably.

Florida was able to barely squeak by a Kentucky team that gave the Gators all they could handle down in Ben Hill Griffin. But that result created a lot of negativity among Gators fans befuddled as to how and why Kentucky was able to contain Florida so well and push them to the wire. After all, this was "just Kentucky," right? Since the 'Cats were oh for their last 27 tries against Florida, shouldn't that have meant their team this year would just lay down and take the loss?

I mentioned on Saturday that Kentucky was bringing its best roster in a long time to Florida, and I meant it. They proved that to be true. So people were wrong about Kentucky rolling over.

But that doesn't mean people are right about their concerns about Florida.

Florida was able to maintain a balanced offensive attack with 295 yards passing paired with 237 yards rushing, but was that ideal? The way the game played out certainly says no, but numbers don't always tell the right tale. Demarcus Robinson put on one helluva performance, but after his 15 receptions, Florida's next leading receiver recorded just two.

Following a game where six Florida running backs recorded carries against EMU, the Gators used just two backs against UK, with Matt Jones gaining 65 percent of the team's total rushing yards. Doesn't a spread offense need to spread the wealth to succeed? Maybe, but maybe not.

As I watched the game initially, I watched what I thought was Kentucky's game plan putting Florida's to shame. I watched UK make halftime adjustments, while UF seemed to regress in their attack. But after going back to the tape, that wasn't a faulty game plan — it was just a perfect storm of poor execution.

If you recall my piece previewing Kentucky's defense going into Saturday's matchup, you remember me focusing on the speed of Kentucky's defense being their strength. They traditionally run their defense out of a 3-4 formation, but slightly tweak it to more of a 3-3-5, getting as many defensive backs on the field as possible. UF still had tons of trouble against a smaller defense (in terms of size), though, because UK's defensive backs were all very solid tacklers on this night. They were not afraid to help in run support, and substituting an extra DB in did not hurt them against the run ... unless you expose them a certain way.

Really, though: All of the above is a preface to how Jeff Driskel's slow start really hurt Florida as the game progressed.

The image above is from early in the contest, and as you see, Florida is in spread formation (which is good, since UF should've been looking to stretch UK's defensive backs away from the box). Look over the screenshot and tell me where you think the ball should be going based off the type of coverage and possible open space. I'll wait.

The answer was a deep ball to Dunbar off press coverage, and that was the right decision! Unfortunately, Driskel was a bit off. But that's not a major problem in isolation — all QBs miss throws. The problem was when this became a recurring theme. Driskel was just 3-for-10 in the first quarter, and that was before throwing his interception. 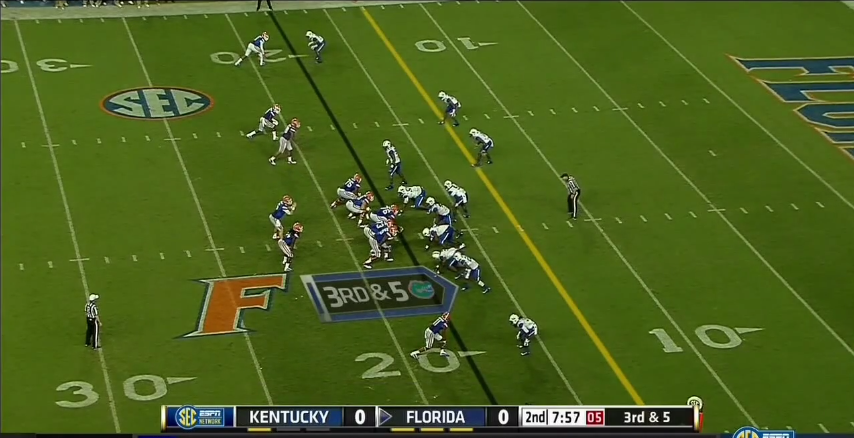 Here's another look at a formation where Driskel should've had success. Kentucky's not much of a press coverage team. Quick routes and precise timing with receivers should've picked this kind of a formation apart — and Florida basically did that, except it didn't finish the play. Driskel makes the right read on this play to Robinson, who is able to create separation beyond the first down marker, but he drops it. That's "just" a drop, but on third and five, plays like that can sit in the mind as a failure — Will Muschamp mentioned this drop, along with Latroy Pittman's early one, in his postgame comments to ESPN's Maria Taylor while still on the field.

Kentucky came into the game wanting Driskel to throw the ball, and he was able to ... but when couldn't convert, the box began to stack and the complex blitz packages came out in bunches. For the most part, I think Driskel was able to read the defense well, but it just seemed like he couldn't get into a rhythm with his execution. 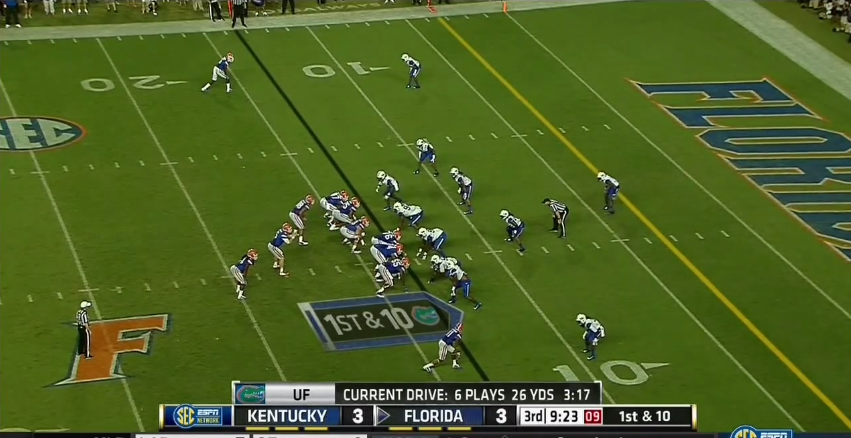 Now, the formation that dominated Florida's offense for most of the second half was actually more of a wing formation. A wing formation is a power look, with two receivers split wide, and a tight end a step back from the line a scrimmage, free to move as directed by the quarterback when he analyzes the defense in the pre-snap. This formation is a fun one for teams looking to establish the power running game — something Florida definitely wants in a vacuum, and absolutely wanted on Saturday.

In the screenshot above, we see Kentucky's linebackers playing two or three yards off the trenches, which allow them to read and flow to the direction the ball carrier is headed. But that's not how defenses will have success against Florida in the wing. To really have success, they will need to clutter the line of scrimmage with at least one more blitzing player and would also need to disguise another rusher somewhere else. This would force the pulling lineman to pick up a player on the fly, which is tough to do in the spur of the moment. On this play, Matt Jones does a nice job of following his pulling blockers, and almost gets into the end zone.

At first, I wasn't a fan of how much Florida was using the wing formation. I thought it brought too many bodies into the box, and really ignored what would be one of Kentucky's weaknessness, spreading the defensive backs out and forcing their linemen and linebackers to win one-on-one assignments. Once Kentucky started to realize the Gators had trouble picking up disguised blitzes, they were able to contain plays out of the wing.

But that's not on UF's game plan: That's on the offensive line, which struggled with blitz pickup all evening, and with Driskel, who seemed to have trouble calling out blitzes, too. Those issues are identifiable and correctable on film, and, especially in the offensive line's case, understandable: Chaz Green was making his first start at left tackle since at least his high school days, and Rod Johnson was making his first start as a Gator. Exotic pressures were a good idea for Kentucky, and they worked.

Overall, I think the wing formation worked well for what Florida was trying to do. It has more moving parts than a traditional power run set, but that risk can bring reward in the form of unbalanced blocking in Florida's favor at the point of attack. And if Kurt Roper can perfect where his pulling tight ends and guards need to be when blitzes come, Jones and Kelvin Taylor have shown the have the vision to make consistent progress up the field.

My last observation is a sunnier one: Florida was able to use Demarcus Robinson in varying formations, and that helped him record his record night. 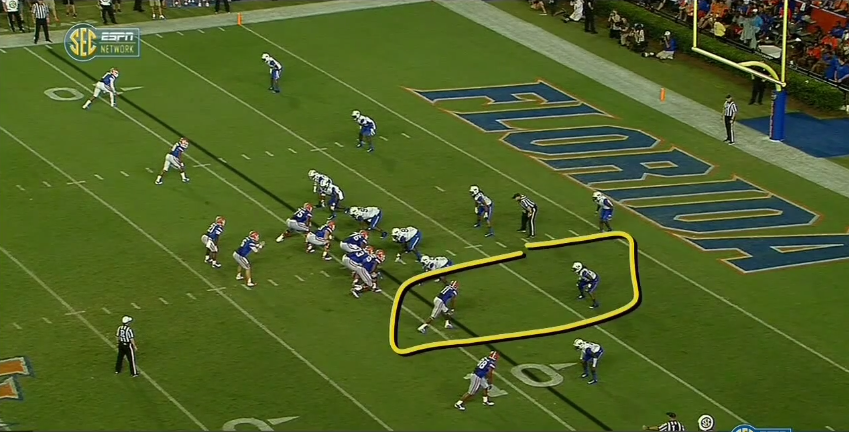 Robinson's success came from being a focal point of almost every passing play, but it's how he was used that allowed him to get those opportunities. Robinson's thought to be an outside receiver, either an X or a Z, but this touchdown shows he can have success from the slot as well. True, this is a man-to-man coverage bust, but I think part of that can be credited to Roper shifting Robinson to the inside.

Because of this, instead of just being able to lock Robinson down using the sideline, the safety is confused on help coverage. This can be a useful tool if teams continue to try and cover Robinson man-to-man. They'll need to establish deep help from an extra man assignment, not from simply a cover deep look.

In the end, I think the circumstances of Saturday's game caused a whole lot more gloom and doom than they should have. It was a frustrating game to watch, not knowing what the outcome would be. But when I go back and pay attention to what Roper was trying to do all game long, it makes a lot of sense. Would I have liked to see a bit more adjustment from him as Kentucky began to recognize where Florida struggled (blitz pickup)? Sure. But this game was much closer on the scoreboard than it probably should have been. Florida did gain 5.66 yards per play, a healthy figure, and would have likely scored more points with a couple more breaks: Had only those third-down drops alone turned into catches, the Gators would've been in much better shape.

This was a good tune-up game for Florida's new offensive scheme. It was a good test against a Kentucky defense that could (maybe should) cause certain teams in the SEC fits this year. And regardless of how it happened, Florida did pass the test.

What did we learn? 1) Driskel still needs to make strides with his accuracy and instincts; 2) Florida's offensive line needs to continue to develop the chemistry needed to take on heavy complex blitzing, because as weeks go by and as more tape is recorded on Florida's go-to formations, the offensive line will need to be ready for anything — and especially for Alabama next Saturday; 3) good Lord, put down the panic button.