We break down the Gators quarterback's failures on offense against Alabama.

Following a weekend where the college football landscape seemed to be thrown through the spin cycle of a washing machine, one powerhouse program took care of business: Alabama.

The Tide put whatever worries their defense may have this season to rest for at least another week by making Jeff Driskel and the visiting Florida Gators offense about as incompetent as you can when it came to the stat sheet.

And 'Bama outgained Florida, 645 to 200, in total offense. For perspective, both Southern Mississippi and West Virginia gained more yards against Alabama this season than Florida did. But what was more troubling was how little Florida could do against a secondary that was young, inexperienced, missing a starter for a half and just plain not as talented as 'Bama has been in recent years.

Maybe it was some bad luck. Maybe it was a few plays that could've gone Florida's way that could've made this game much closer and more competitive. After rewatching the game, I'm sympathetic to those ideas: Things certainly aren't as bad as the Florida message boards portray them to be.

But they ain't that pretty, either.

Over the last two seasons, the focal point in all offensive struggles (and success) for Florida has been Jeff Driskel. In 2012, he was consistent enough to keep pressure off the defense and generate enough points to win a lot of big games. In 2013, Driskel seemed to regress as a game manager early in the year, especially against Miami, as Brent Pease tried to get him more involved in the pro-style offense — forget whatever you know about the phrase "game manager," all quarterbacks are game managers.

This year was supposed to be Driskel's coming-out party. With Kurt Roper at the helm, Driskel would finally be the centerpiece of an offense he was recruited to run: The spread. But, though he was 2-0 going into Florida's toughest road test of the year, Driskel certainly showed his flaws against Kentucky the week before.

Alabama's defense, though, showed uncharacteristic weaknesses from what fans have been used to seeing — no weaknesses at all, really. Nick Saban appears to be in a transition period, shifting his defense from a power-based, traditional 3-4 to a more athletic type of hybrid 3-4 front. This, as I explained in my preview article, left some areas more exposed than others, areas that were perfect for a spread type offense to capitalize on.

So what went wrong? 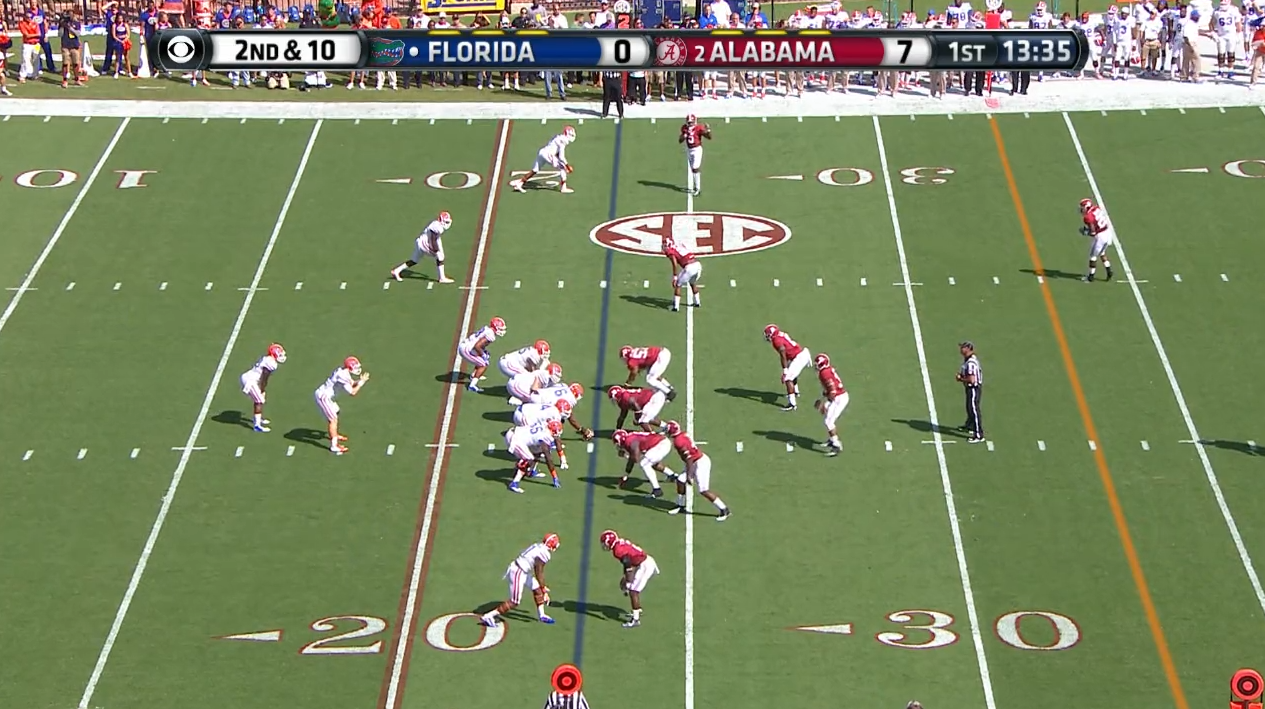 The above formation is what we saw Florida play out of most of the game, and the same can be said for the formation Alabama used to tried to match them. The Gators are lined up in the wing formation with a three-receiver set and a running back one step beside and behind Driskel. From the formation, the possibilities are endless.

In the event of cornerback blitz, something Saban loves to call, Driskel would have the slot wide receiver or receiving tight end open for a quick pass either down the middle of the field or in a quick slant route; the linebacker can't cover them both. That scenario keeps the strong safety, whose job it is to cover the slot receiver since the nickel corner is blitzing, honest when covering down the middle and freezes the linebacker in space because of the play action.

Here's a perfect example of what that looks like.

Sweet mother of all that is holy, that was beautiful.

Watch how Driskel noticed the nickel blitz was on; he knew his first look after the play action would be to reading the strong safety's first step. That would determine if he would dump it off to the slot receiver on a screen or be able to throw it to the tight end over the top. Because Landon Collins's first step was toward Latroy Pittman at the line, Driskel saw his window over the top and hit his pass perfectly.

Much like he did against Kentucky early on, Driskel was actually making all the right reads (in the passing game, we'll get to the run game in a bit), and even at the beginning of this game, he was throwing with confidence. Let's look at another example of great offensive play work that you can't read on a stat sheet.

This pass went for an incompletion to Pittman down the sideline, but, really, the only thing that could've possibly gone better was for Pittman to get his foot down.

This play can be credited to something I noted in my preview breakdown of Alabama's defense. Ha Ha Clinton-Dix had incredible range as a last line of defense for 'Bama the last two seasons. This allowed Saban to play Cover 1 and Cover 3 with Clinton-Dix looming in the single-high zone.

Here, we see Collins show up a bit late to help his cornerback, which gave Pittman a chance to bring down a great throw. The important takeaway from this play shouldn't be that it was an incompletion: It was that Driskel knew he could take advantage of a less-threatening Collins as a free safety. Great decision coming from a good game plan.

If you need another example of that which went for positive yards, here you go:

Driskel picks up on the nickel blitz, recognizes the safety out of place, and delivers a great ball for a score. Watch film, apply lessons, rinse, repeat.

Early on, things looked good, even with some stagnant drives here and there. But by the middle of the first half, things really started to fail.

Driskel led the Gators in carries with 11. I have to assume a big reason for that was the growing deficit as the game went on, which dissuaded Florida from using its running backs. But there was still a key area where Driskel did not have enough success for Florida to stick to their guns: The read option quarterback keep.

In the play above, Driskel has a decision to make as the ball goes into the gut of the running back. At that moment, it's his job to read the free defensive end and which direction he seems to be cheating towards. If the DE is staying put, the ball should go to Jones up the middle, but if the DE is collapsing towards the middle, the ball should stay in Driskel's clutch, and he should take it outside the tackles. On this play, you see Driskel make the wrong decision: Instead of handing off to Kelvin Taylor, who has great blocking ahead of him, and should gain five or six yards, he keeps, and is swallowed up for a loss by Denzel Devall.

Too many wrong decisions and the defense won't fear the quarterback keep. Then they collapse on the power run. Then they can condense the field with less stress on the secondary. It's a domino effect.

What I noticed in the run game was a bit of a pattern: Power runs up the middle were having success, runs to the outside were generally getting swarmed.

The Vine above, as well as Driskel's designed quarterback run up the middle for a touchdown, were great examples of how Florida had chances to dominate Alabama up the middle because 'Bama was no longer playing in the power 3-4.

But it's easy to look at the plays that worked and think, "Why don't they run the ball more!" Well, the reason for that is because one unsuccessful run on first or second down hinders a series, just like an incompletion on first down does. It's tough to recover from that, and with Alabama being able to play the run thanks to Driskel's inaccuracy in the passing game, the Tide could stack the box.

If Driskel could've completed a few more of his passes, he could've stretched out the defense more. This would've opened up more opportunities for those power run plays which we saw had success. Any team that plays Alabama this year should have two goals in mind: Wearing the Tide out, and passing enough to better enable wearing them out.

Florida wasn't even competitive in the the time of possession battle, holding the ball for just 20:44, and Driskel completed just nine of 28 passes. Stats like that are clear reflections of failure to meet those goals.

And finally we have to end on what ultimately did Florida in, Driskel's missed opportunities in the passing game, whether by errant passes or just bad decision.

Until the throw, Driskel seems to do everything right on this play. He recognizes the matchup down the seam with a faster Pittman on a slower linebacker and climbs the pocket when pressure comes from the outside. But he overthrows his man by that much, and it's an easy pick. Football is a game of inches. That's all it took here.

Driskel's second interception occasioned the raising of the white flag, but maybe for a different reason than you'd think. Initially, it appears to just be a bad decision by Driskel for throwing the ball into double coverage, but you have to go back and look at it closely to realize it was more of a good play by Alabama than a bad one Driskel. 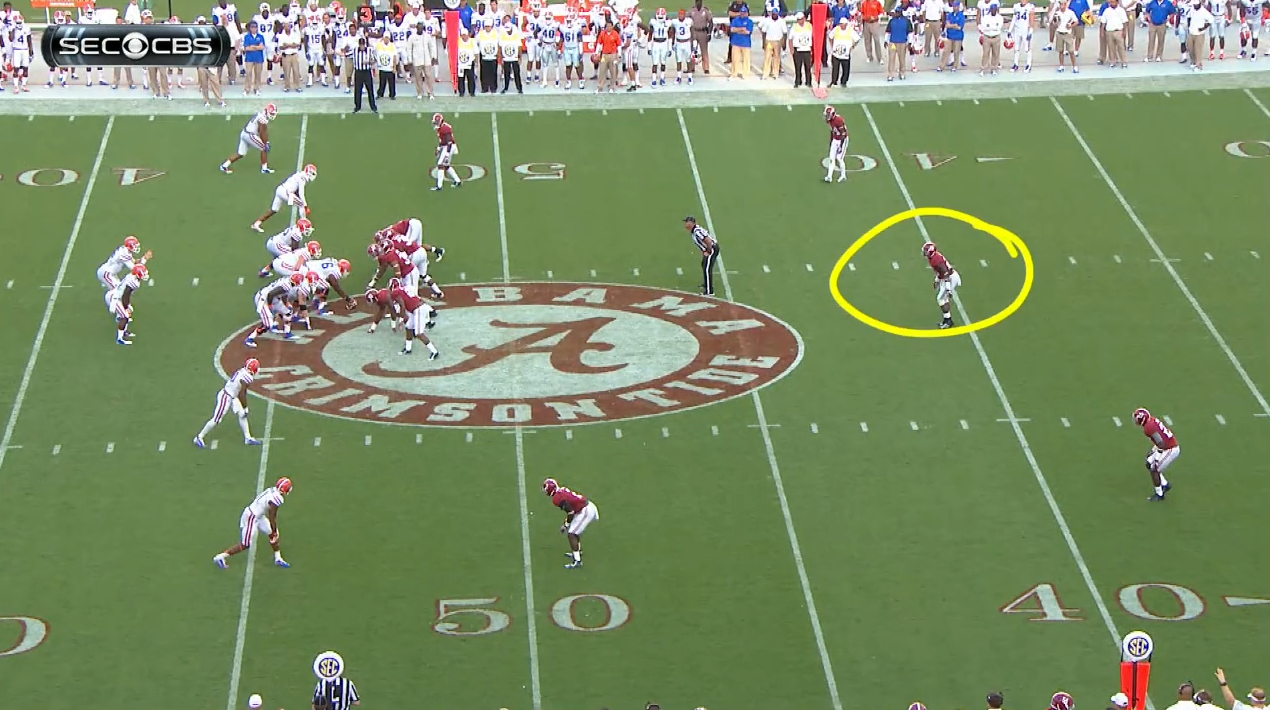 If you read my preview article -- sorry, but you have to know 'Bama's defense to really understand what I'm highlighting -- you know Saban is forced to play more Cover 2 this year than he traditionally prefers because of the limited coverage range of Nick Perry and Collins. Here we see a Cover 2 in the sense there are two deep safeties, but really, it's that Saban's custom Cover 2, which still keeps the cornerbacks on the deep outside routes to counter a play where all four wide receivers may run vertical routes. That's what we have here, a play I'm sure Roper and Driskel worked on religiously in practice (it tends to be Saban's kryptonite).

The vulnerable portions of Saban's special Cover 2 are right down the middle, as the linebackers retreat in coverage against the seam routes. This normally gives cushion between the linebacker and safety for a small-window pass that can be practically unguardable out of that defensive formation with a good throw. But with Collins highlighted as almost an extremely deep middle linebacker/third safety, he takes care of that zone.

This isn't something that's on tape very much, because it's never something Saban needed to run. Driskel decides to take his chance against the zone anyway, and pays for it. Brilliant defensive adjustment, in my opinion, and a tough break for Driskel: Collins was playing a role he probably hadn't seen, and is a great player who made a good play.

After watching this game again in full, I wouldn't agree on pulling the plug from Driskel yet. On tape, he's making the right reads. I've seen a lot of people calling for Treon Harris because he made great throws against an abysmal Eastern Michigan defense. I think Harris is talented, and he may even be more accurate than Driskel. But my problem with giving him the nod right now is that history of college football shows all those correct reads Driskel is making may not be made by a true freshman quarterback.

Driskel's day was bad, and, indisputably, his year so far is bad when it comes to accuracy and consistency with execution. But I wouldn't pull him just yet, even if his hourglass may be running low.

I'd see what he can do against a team that isn't one of the greatest defensive powerhouses in the last decade.

But if he's ineffective against the Vols...