Ever wonder how Florida might play on its bye week? So did I!

Since we don't get the pleasure of watching the next chapter of Florida Football: The Will Muschamp Saga unfold this week due to the Bye Week, we've decided take matters into our own hands. Instead of breaking down what Florida's weekly opponent is, we've decided to break down any possible matchup from each team in the Power Six Five conferences. Each game is set at a neutral site and is judged as if it were being played this week. Let's see how Florida matches up against the rest of field!

You're not the Big East, you phony!

Even all the Will Muschamp in the world can't stop Clemson from Clemsoning.

In 2007, Steve Spurrier gave Duke the 25th spot in his Coaches Poll ranking WHILE DUKE WAS ON A 20-GAME LOSING STREAK. Spurrier can't choose, and neither can I.

The triple option worked before.

Line (if in the Superdome): Louisville by 13

Line (if played literally anywhere else): Florida by 6

No Charlie Strong. No Teddy Bridgewater. No New Orleans voodoo curse. Although ... would you rather have a UF win, or beignets? Sorry, y'all.

I could not name you one player on UNC's roster, and that line is there just to put more pressure on Florida's kickers.

Russell Wilson once put on an N.C. State uniform and played the game of football representing that school. BUT so did Mike Glennon...

Pitt lost to Iowa... At home.... They deserve relegation from FBS football. I HAVE SPOKEN.

(Georgia Southern is better than Iowa.)

Miraculously, the NCAA finds Greg Paulus one more game of athletic eligibility and the rest, they say, is... GOOD LORD, THAT MASCOT IS TERRIFYING. I'M NEVER DRINKING ORANGE JUICE AGAIN.

Fun fact: The University of Virginia was founded in 1819 by Thomas Jefferson himself. And they probably haven't beaten an SEC team since 1819 either, HEY-OHHHHHHHHH. (But, really, not even LeBron could save these Cavs.)

They beat Ohio State in The Shoe. "Yeah but they lost to ECU and GT." WELL, SO WOULD FLORIDA, WE'LL GET THERE. 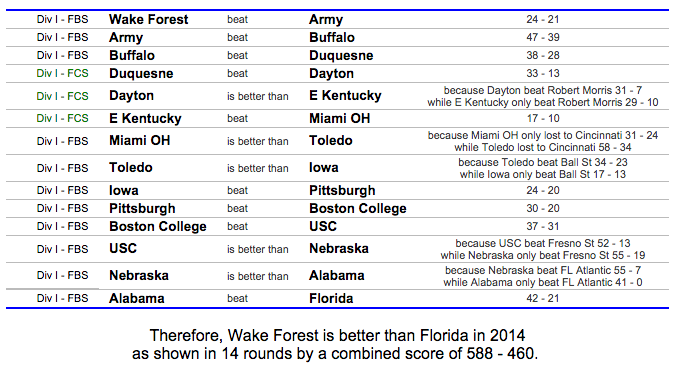 This game would be much closer if Florida was allowed to play offense. But team rules are team rules.

In the month of September, Cyclones quarterback Sam B. Richardson has a 137.7 quarterback rating over his career. That's just bad luck, Gators.

Charlie Weis signed a three-year contract to be Florida's offensive coordinator back in 2011 and I'm pretty sure Florida's still paying him for that contract. I can't in all good conscience believe Florida would ever pay someone to.... beat........ them.............

K-State took Auburn to the brink last week. The only brink Florida would take Auburn to is the re-release of the Disney Channel Original Movie Brink, at select dollar movie theaters where you have to fear for your life entering and exiting the premises due to the surrounding neighborhood. Like, the theaters where the road leading to the building hasn't been resurfaced, ever? Those.

Trevor Knight already has over 1,000 yards passing this season. I can't even count that high.

The Pokes almost pulled out the open win versus FSU and just out-dueled Kliff Kingsbury this past Thursday. And as far as I know, Mike Gundy is still a male and is still over the age of 40.

Did you know both George W. Bush and Harrison Ford attended Texas Christian at the same time? Probably not. That didn't happen.

"After the game, much like star athletes exchange jerseys out of respect for one another, Jeremy Foley and Steve Paterson exchanged head coaches. Both programs continued to be bad."

Sorry, I wasn't watching the game. ESPN installed a new KliffyCam, and I now understand why people prefer to watch the games from home. #YesAllWomen

A guy named Clint Trickett almost gave Nick Saban his first opening-game loss since what I assume goes all the way back to when he was a serpent in the Garden of Eden.

See, this is difficult: I'm trying to match up complete lack of roster talent against Florida's uncanny ability to underproduce. Illinois had Dee Brown. They win this time.

I need Florida to win this just so we can all say "Hoosier Daddy?" to the one Indiana fan we know. PLEASE, FLORIDA, WE NEED THIS.

The Iowa Hawkeyes are the Tampa Bay Buccaneers of college football.

If Driskel thought a normal defense was confusing to read, try a weird defense with weird jerseys. Oh, and with seafood poisoning.

Four, as in, number of stories there are in the Mall of America. HAVE YOU BEEN IN THAT MALL?! IT HAS A ROLLER COASTER. IT HAS A FREAKIN' ROLLER COASTER. "LET'S GO TO THE MALL. ... TODAY!" NOW I CAN'T STOP SINGING IT.

HAHA BRAINS CAN'T SAVE YOU NOW, NERDS! Although, mind over matter, and a football is matter. But the score of a game then becomes nothing more than a representation of the inner workings of the mind's doing. And only the highest forms of thought provoke great actions in its favor.

So I guess Northwestern wins.... wait, how did they do that!?

BOY, THIS COULD BE QUITE THE STRESSFUL GAME, HUH, URB?

The nickname "Boilermakers" dates back to 1891, when the Purdue football team defeated nearby rival Wabash College 44–0. An account of the game in the Crawfordsville Daily Argus News of October 26, 1891 was headlined, "Slaughter of Innocents: Wabash Snowed Completely Under by the Burly Boiler Makers from Purdue."

(This is actually true.)

9.4, as in the average number of yards Melvin Gordon runs for every time he touches the ball.

'Zona QB Anu Solomon was born in Las Vegas. After further investigation, the NCAA has determined "What happens in Vegas stays in Vegas" also applies to athletes born within city limits. Unfortunately, since the official signing of Solomon's scholarship was made in his home WITHIN Vegas city limits, he is hearby ruled ineligible effective immediately.

Arizona State's logo is a trident. Where are we, Neptune? What is this, Blitzball?

One time in NCAA Football's Road to Glory, I created Peyton Manning's adopted black son Vernon Manning, and he went to Colorado and won the Heisman four years in a row. That story begins today.

Everyone thinks Sean Mannion's so cool because he's big and tall. Being big and tall's not that cool. Bet he can't fit in a Prius. Yeah. SCREW YOU, TALL BOY.

Will Muschamp will be too busy hearteyes.emoji-ing at Stanford's tree trunk-led, massive-man pro-style offense to even call defensive plays. Might help, though!

UCLA QB Brett Hundley is making a case for himself as an early Heisman favorite. But Florida RB Kelvin Taylor actually leads all of college football in the "Instagram posts about you being a dark horse for the Heisman trophy" category, and we all know which one gets more girls.

Utah recovered from their Urban Meyer departure with more grace than Florida did ... er, wait, did is past tense. And for that, we will forever be inferior. Thanks (?) for Bernie.

Washington State is No. 1 in the nation WITH ALMOST 500 PASSING YARDS PER GAME and ALMoST DEAD LAST AT No. 126 IN THE NATION WITH JUST 45 RUSHING YARDS PER GAME. WHAT. HOW. WHAT. (Also, the Cougars' flag is at every single College Gameday. Look for it in the background, you'll find it.)

Florida will need to score more points than Arkansas to come out with a win here.

"Help us, Harvey Updyke, you're our only hope."

When does the St. Johns River flow north? BECAUSE GEORGIA SUCKS.

This rematch really boils down to adjustments. Florida seemed to get their offense going in the second half, but the defense continued to miss their assignments. I think if Kentucky can continue to capitalize on their offensive chances and really clamp down on Florida's running game, they may be the favorites to... oh, wait, Drake's here. Never mind.

Les Miles will cover that with 13 fourth-down conversions, and drink at least three grass smoothies.

I mean, Missouri did lose to Indiana.

Line: Spurrier by half a hundred

Line: Florida by 10 years in a row