Jeff Driskel looked good in his first game action since September 21st of last season in leading the Florida Gators to a blowout opening season win.

For all his faults, Jeff Driskel has been a pretty good quarterback during his time here at the University of Florida.

For one, he's got a 12-3 record as a starter and last time I checked that's a pretty good record. I'll also be the first to admit that his career statistics aren't the greatest, as he's thrown for around 2,500 yards and just 15 touchdowns against 10 interceptions. But that's not all he's bashed for amongst the Gators faithful in certain comment sections.

Continuing cries that he stares down receivers, holds onto the ball too long, and makes bad decision after bad decision are just a few of the criticisms that linger. I think that, sometimes, they're made just because he's Driskel (whether or not he was their pick in the Driskel vs. Jacoby Brissett starting quarterback question a few years is another matter), or because we as Gators fans are notoriously hard on our quarterbacks.

To an extent, that makes sense. Since 1990 we've had some pretty good ones: Danny Wuerffel, Doug Johnson, Rex Grossman, Chris Leak and Tim Tebow come to mind. We've had some quality backups, too. Whether Driskel is the worst of the bunch is a debate for another day (Um, Doug Johnson being in this list and Jesse Palmer and John Brantley not being in it at all should maybe help your thinking — Andy), but for now, he's our starting quarterback and it's probably time for all the negativity to stop.

It's a new season and a new offense. Let's see how things play out.

Especially because, at the moment, things are looking pretty good, no matter who the opponent was.

Play No. 1: Driskel completes pass to Quinton Dunbar on fourth and two 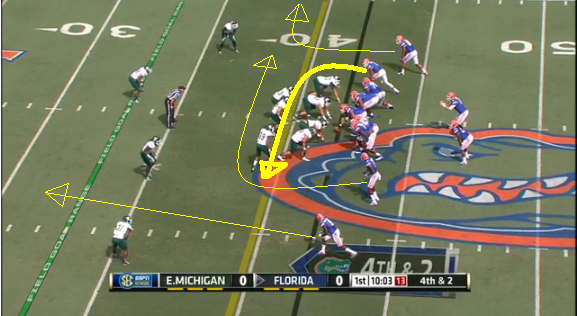 This play to Dunbar is really rather simple to execute. Dunbar will be coming across the middle while all three of the Eastern Michigan linebackers will be blitzing, and the defensive backs are slow to fill in the gaps in the middle of the field. 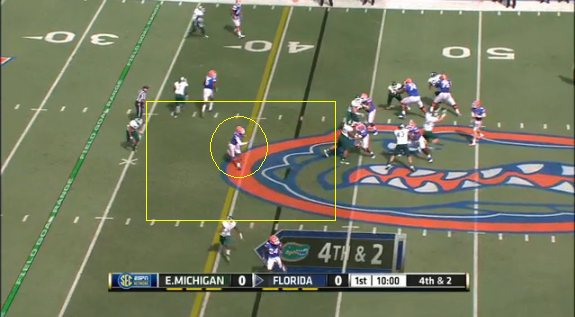 As Driskel throws the ball (with a man in his face!), you can see that there really isn't a defender within five yards of Dunbar. I don't know if there was some miscommunication by the Eastern Michigan defense or not, but you just can't give a team that much open space on fourth down this early in the game. 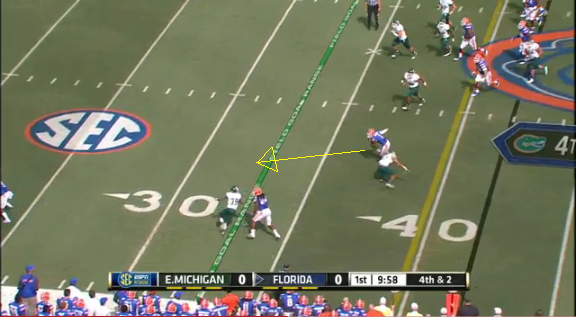 Dunbar puts on a nifty little juke move on the defender here as he cuts inside, and will gain about five more yards.

Play No. 2: Driskel hits Dunbar for a 42-yard completion 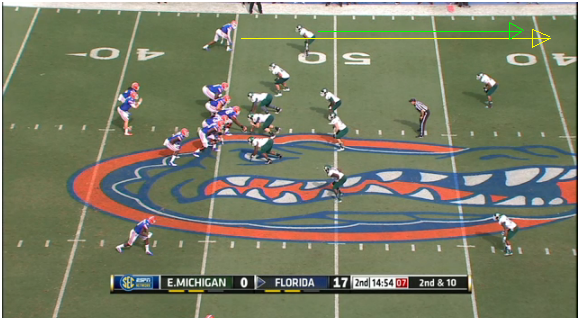 Someone mentioned in the comments of our Game Thread (you can find the link in the first paragraph of this article) that Demarcus Robinson is a better deep ball receiver than Dunbar because he's less clumsy in the air. We'll get to Robinson's catch that resulted in the reference either tomorrow or Wednesday, I promise.

For now though, just enjoy this go route from Dunbar. 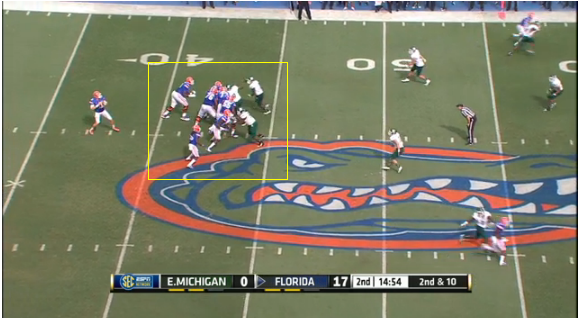 As Driskel looks to throw, notice the blocking by the offensive line.The unit played pretty well against an Eastern Michigan team that many think is among the worst teams in the FBS. 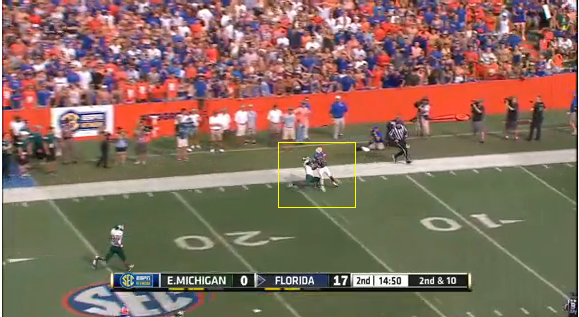 Despite an Eastern Michigan defender all over him (there were penalty flags for pass interference thrown on the play), Dunbar completes the catch. The ball was slightly, and I mean slightly, underthrown: Much like complaining about an underthrow on Treon Harris's strike to Robinson a little later in the game, that's nitpicking a bit on an overall great play. There aren't too many cornerbacks in the game who are going to be able to defend a throw like this. 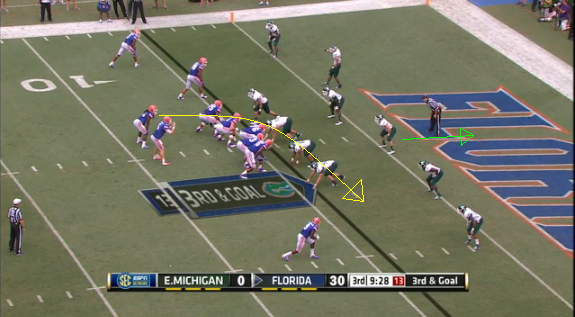 For all of you who bash Driskel, let's see: What you can find wrong with this play? Don't worry, I've got time. I'm sure you can find something, even though there really isn't anything. (That would be about par for the course with the anti-Driskel crowd.)

On this play, Jones is going to run a crossing route (as the second option on the play) while the defender takes the wrong route and just backpedals into no man's land. 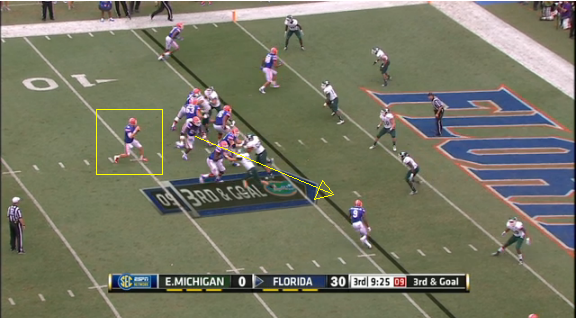 Look! Look! Driskel is reading a defense and going through his progressions!

That's something he never does ALL THE TIME. For whatever the reason, nobody seems to give Driskel any credit in this regard, but he isn't nearly as bad when it comes to reading a defense or checking down on the play as people think. 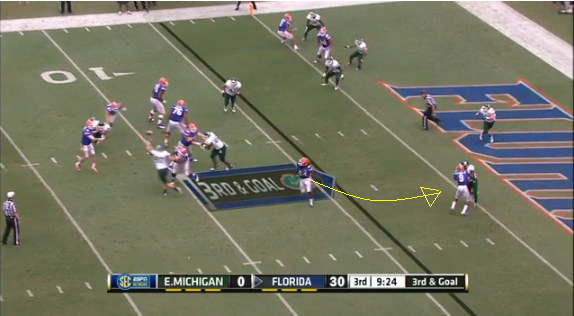 After reading the defense and going through his progressions, Driskel wisely dumps the ball off to a wide open Jones, who will plow through a defender on his way into the end zone for a touchdown. You can see the defender who was assigned to Jones standing in the endzone all by himself.

All in all, it was a great day for Driskel and the Gators offense as a whole. We'll have more on the rest of the offense in the coming days, including a great debut by a freshman quarterback.

For now, we can enjoy having Driskel as our starting quarterback.

Having Driskel throw for 248 yards (31 completions on 45 attempts) and a touchdown in his first action in nearly a year is only going to make that enjoyment even more sweeter.