The Florida Gators' running backs ran wild against the Eastern Michigan Eagles on Saturday. We look back at some of their best plays.

Well, that certainly was fun.

The Florida Gators used a potent rushing attack in beating up on the Eastern Michigan Eagles on Saturday, to the tune of a 65-0 shutout. We're not going to highlight the defense this week due to popular demand (we'll look at Treon Harris tomorrow morning), but if the Gators' defense performs like it did and the running game shows up week in and week out, the Gators are going to be tough to beat.

Three players (Brandon Powell, Darius Masline, and Mark Herndon) who may barely see the field unless the game is out of hand, saw action earlier than expected, and combined for 13 carries, 60 yards and a touchdown. The remaining few carries were done by the quarterbacks — but those carries were few and far between as Kurt Roper designed very few quarterback keepers, and Jeff Driskel appeared intentionally reluctant to keep on read options.

Play No. 1: Taylor rushes 31 yards for a touchdown 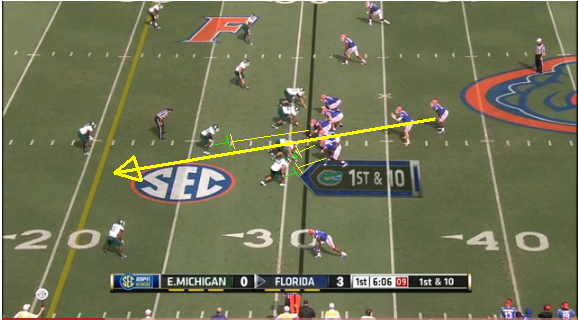 There is a primary reason Kelvin Taylor is going to be the Gators' feature back for the foreseeable future: His speed. Without even taking into account his field vision and his deceptive power, Taylor's got the quicks to burn teams. 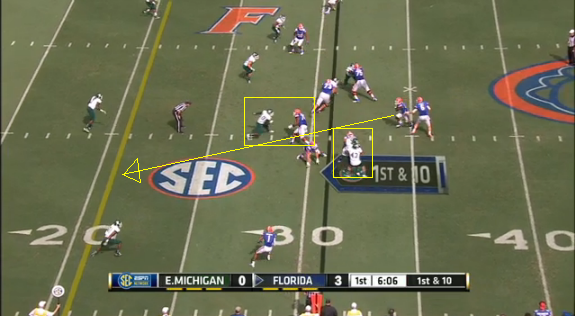 As Taylor gets the ball, a couple of great blocks by the offensive line set this play up for great success. Overall, I thought the offensive played very well throughout the game, except when a couple of guys had to come in cold and/or switch positions on the line. The pass protection and run blocking were the best we've seen in a long time. 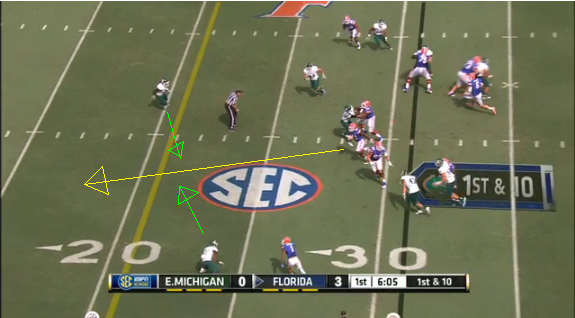 Taylor takes advantage of the hole opened up by the offensive line and the rest of it is all speed. Even though there are two defensive backs that have the better angle on the play than he does, Taylor does his best Chris Johnson impression and accelerates past the two defenders for the touchdown.

Play No. 2: Jones rushes 41 yards for a touchdown 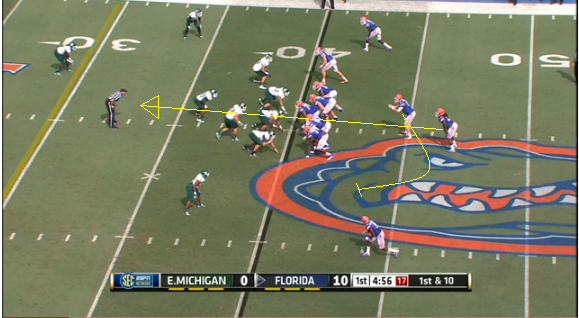 I believe that this is one of the plays in which Driskel hands it off instead of keeping it himself. I think that, as hinted at by per Muschamp's presser after the game, coaches told Driskel to just hand it off more often than not. That's fine: Florida can and should save that stuff for the bigger games. 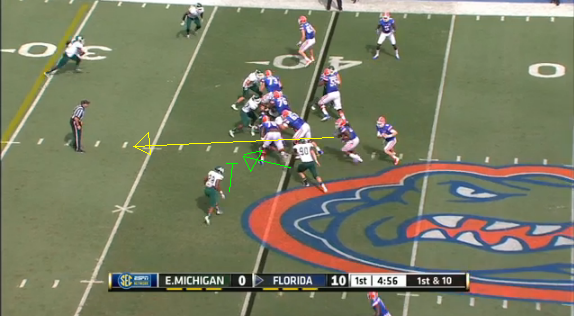 Jones displays his own excellent speed on this play. His acceleration into the next level is impressive, as he outruns not one, but two attempted tackles. As a side note: This was also the right read by Driskel, because there is a defensive back still free and watching him closely. 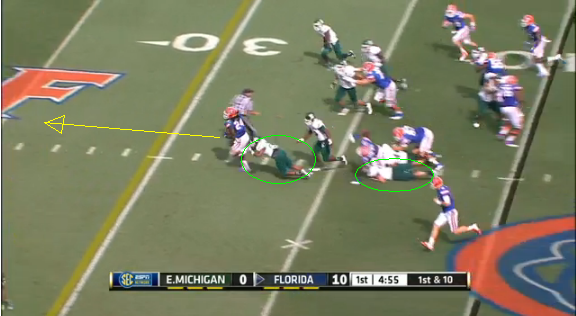 There are the two defenders that just barely missed making the tackle. Jones will go the rest of the way untouched into the endzone for the touchdown.

Play No. 3: Powell rushes 12 yards for a touchdown 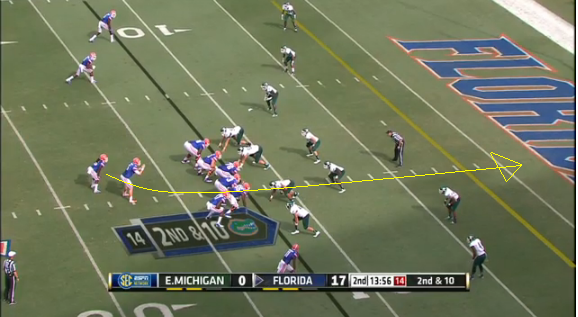 I guess this really isn't quite garbage time, but hey, good for Powell. He's going to take the handoff out of the shotgun formation (notice the trend?) and just run through the right side of the offensive line. It was also good to see that, unlike the previous two touchdowns, this play was run to the right side. 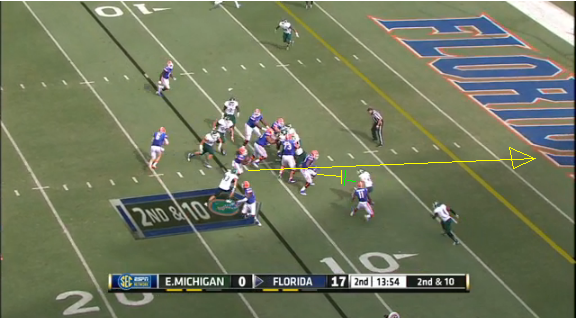 Powell already has one good block in front of him (No. 73 Tyler Moore) and he's about to get the last block needed to spring him on the play. On these three highlighted plays, the offensive line as a whole does a great job in opening up running lanes for the running backs, but that was par for the course throughout the game. Powell just makes it past the a diving defender for the touchdown.

If the Gators' offensive line and running backs keep this pace up for the rest of the season, it should be a very successful one. I sure hope that happens.

Truth be told, though, I just don't see that happening. With a couple of injuries (D.J. Humphries and Jake McGee, who will also hurt in the passing game) and the conference schedule about to start, things are about to get a whole lot more difficult.