Leo Jefferson has a list of complaints. How many of them are valid is anyone's guess.

Thursday afternoon, the suddenly outspoken father of CeCe Jefferson has told Rivals national director Mike Farrell a slew of reasons that his son's National Letter of Intent still hasn't been faxed in to the Gators — and, having gotten enough mileage out of teasing Twitter sufficiently, Rivals has thrown those quotes in a story rather than behind a paywall.

Let's run down the allegations.

Leo Jefferson also told Farrell that Florida is CeCe's "dream school," and, despite concerns he and his wife have about CeCe not being able to "go away from home to grow up and get away from all the Gators fans in Baker County and his friends that might distract him" at Florida, as Farrell writes, he conceded that "if CeCe wants to go to Florida, we are on board."

But other reports suggest that the most important detail of Leo Jefferson's story — Florida coaches failing to say anything about Williams leaving — may not be fully accurate.

ESPN's Derek Tyson reported — prior to the missing NLI becoming a national issue — that CeCe Jefferson knew about Williams leaving:

Reports that UF D-line coach Terrell Williams headed to Dolphins. For what it's worth, CeCe Jefferson knew this was coming.

And even presented with this tweet from late Thursday morning...

...Tyson stuck to his guns.

Positive he knew. My man knows how to play the game RT "@GatorFL2: @cecejeferson7 according to @DerekTysonESPN you knew this? Naw?"

And, for whatever it's worth at this point, CeCe Jefferson said Wednesday that his "mindset" was "don't commit to a coach, commit to a school."

Additionally, Tyson also says that it's really just Leo Jefferson digging in his heels on this.

On @finebaum, @DerekTysonESPN says reason Jefferson's NLI is not in is b/c dad is in possession of #Gators NLI. Otherwise, mom would sign.

For what it's worth, Leo Jefferson also tweeted this at 4:25 p.m. Thursday, suggesting that coaching turnover is at the heart of the objection by an unspecified "we":

Yes we are holding out. Florida making to many coaching changes this is not a game it's my son life

Tyson suggested that these quotes from Leo Jefferson be taken with a "grain of salt," also pointing to Leo Jefferson smiling at CeCe's commitment on Wednesday and saying "Something just seems off."

ESPN's Gerry Hamilton had his own tête-à-tête with Leo Jefferson, in which Jefferson seems to set up rules, while discussing the missing NLI, that he later broke in speaking with Farrell — or perhaps during the same conversation with Hamilton:

"No, we are not sending it yet," Leo Jefferson said. "CeCe is still thinking about it. He wants time to think about it."

Rumors have circulated that Jefferson’s cold feet have been caused by Florida defensive line coach Terrell Williams leaving for the Miami Dolphins. Jefferson’s father declined to comment on what was delaying the decision.

"I don’t know. I don’t want to speak for CeCe," Leo Jefferson said. "These young kids change their mind all the time."

Beyond the quotes that may not all line up, some of Leo Jefferson's assertions strain credulity.

Florida being brief with Jefferson and his family on an in-home visit makes some sense. Gators coaches were criss-crossing the state of Florida (and reaching into Georgia) during their whirlwind January of recruiting, and it's very possible that they were in and out on their visit on January 26. And I would certainly understand being miffed about that.

But if what Leo Jefferson told Farrell — that Jim McElwain hasn't called (and it's unclear whether he means called Leo Jefferson, or called CeCe) on Thursday, and that Florida isn't currently pursuing Jefferson hard — is true, which is itself doubtful, I'd bet it has a fair bit to do with Florida receiving a commitment from CeCe on national television on Wednesday. 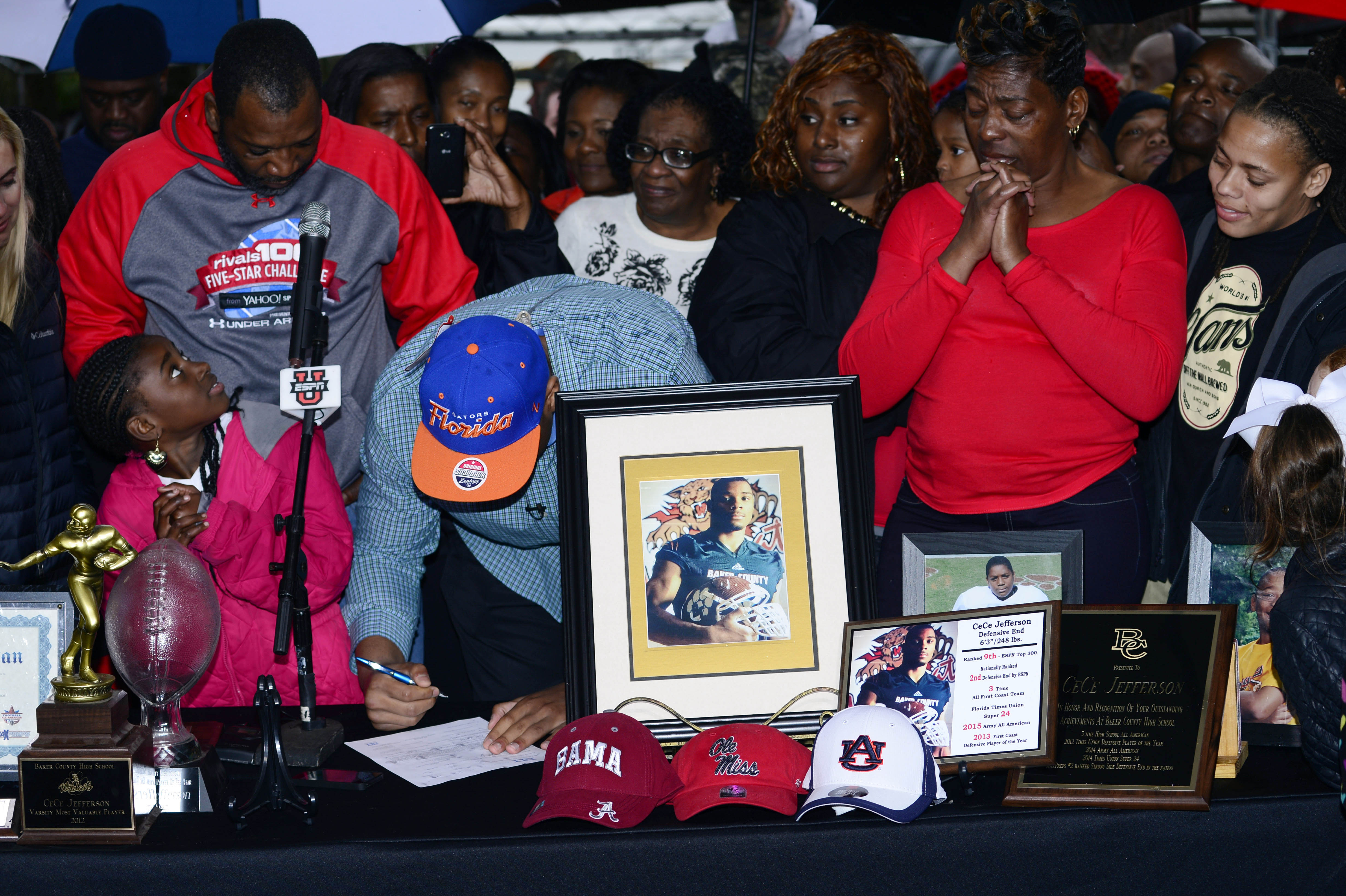 Recruiting is about the long haul, of course, but there is a reasonable assumption that, once a player makes a public commitment on National Signing Day, it's merely a formality of paperwork for that verbal commitment to become to received and binding NLI — and that's true even when the player doesn't John Hancock an NLI on camera.

With a recruiting cycle over, college football coaches do take brief vacations after National Signing Day. And though it's obviously a stretch to think that Jim McElwain — who still has to hire a wide receivers coach and a defensive line coach, seemingly needs to re-reel in CeCe Jefferson, and either offered or had a subordinate offer a 2016 recruit on Thursday — is tanning in Aruba right now, those coaches who do vacation after Signing Day do so based on that reasonable assumption.

Also: Since that commitment, CeCe Jefferson has said publicly —  more than once — that he was planning on sending his National Letter of Intent to Florida.

CeCe Jefferson just told me on-air he is faxing the letter-of-intent to UF tomorrow morning. So you can relax.

CeCe Jefferson said he was planning on sending in his NLI today. Said maybe tomorrow, but added he's not changing commitment to #Florida.

Maybe Leo Jefferson isn't speaking for CeCe, but his "we are holding out" would appear to be at odds with his son remaining interested in sending that piece of paper to Gainesville. And if CeCe wants to send it, I would very much understand Florida coaches not trying to contact an adversarial father.

The most unbelievable thing, though, is Leo Jefferson's apparent concern that Jeremy Foley has too much power. That charge — which generally boils down to some variation of "Foley is a bean-counting, micro-managing megalomaniac" — gets thrown around on message boards from time to time, but it was made in the press in a strikingly hostile Sports Illustrated opinion piece by Pete Thamel and Thayer Evans after McElwain's hiring, and has almost certainly become a popular refrain on the recruiting trail since, especially given that one of the coaches doing the most recruiting against the Gators of late, Will Muschamp, knows the inner workings of the Florida athletic department.

And given that Thamel has long-standing ties to Urban Meyer (which help him get incredible access to Ohio State's head coach), it's fair to think that there may be some truth to this narrative — even if it seems to always be presented through uncharitable filters.

I don't think that Foley's nearly as power-hungry as some seem to — and I think making him a villain sure would be convenient for a lot of people — but, even if he were, the single best substantive counter to this characterization of him is based on fresh new evidence.

But that's not really even the point: The idea that a recruit's parent would balk at the power possessed by an athletic director is, frankly, absurd and perhaps unprecedented, which makes me think these concerns were planted.

Where this story goes from here is unclear, but everything I've seen and read and know suggests that a resolution that puts CeCe Jefferson in Florida's recruiting class will eventually come to pass. Leo Jefferson can hold out as long as he wants, but if CeCe wants to sign with the Gators — as every detail so far has indicated — Florida could simply get a National Letter of Intent to his mother, who still seems to be in favor of CeCe heading to Florida, and make an end run around the man who described himself to The Gainesville Sun as "a die-hard Gator fan."

There may be no easy way out of this — for CeCe Jefferson, or for his father, or for the Gators. But unless CeCe changes his mind, or Florida improbably decides to stop pursuing him — and unless you believe Leo Jefferson's argument that they already did that on their way out the door for vacation, it's a safe bet they haven't — it's probably going to end with CeCe Jefferson in orange and blue.