First, let me apologize as this turned out to be much longer than I was expecting, but I do think there are a lot of good data to go through and I hope you are willing to dive into it. As we approach the start of the season, I thought it might be beneficial to dive into different aspects of the transition from the 2020 team into the 2021 team. So, let's dive in to evaluating the Recruiting & Evaluating the Overall Roster for the Florida Gators football team.

The 2021 Recruiting class finished with a ranking of 12 (90.30 average rating for 23 commits which included a long snapper). Accounting for the attrition and additions, Florida’s roster seems to be settling in to what we can likely expect from Mullen going forward. For the most part, the McElwain recruiting disaster has been washed out and the 2021 Roster is practically all Mullen.

Area #1 - Offensive Line is still not over the 50% mark with respect to the Blue Chip Ratio, something we have not seen accomplished since 2014. Furthermore, the OL has very little "elite" to "great" rated prospects, with Delance (0.946) and Gouraige (0.960) being the only lineman on roster with a rating over 0.910 and one of them is not playing at the level equivalent to their rating.

Area #2 - Safety is another area of note, given the lack of production from the unit the past few seasons. While the Blue Chip Ratio has finally exceeded 50%, until this most recent recruiting class there are only one (1) player with a rating over 0.900 (Dean). The additions of Collier (0.9525) & McMillon (0.9195) will help, but probably not very much in the 2021 season.

Area #3 - Tight End might be another area of concern given the low level of Blue Chip Recruits that have been added to the roster. Aside from Zipperer (0.9543 in the 2019 class), Florida has not added another Blue Chip to the roster. Zipperer probably has the 2021 & 2022 seasons left before making an attempt at the NFL, so this next 2022 class will be critical for Florida to land an elite prospect at this position and get someone who can make an impact as a freshman.

Even with those areas of concern, Florida seems to have stabilized their roster moving into 2021, maintaining a Blue Chip Ratio in the 60% range in back to back years. The overall improvement of the roster and the individual position groups is easy to see, especially when you go back and look at what the roster was at the end of the 2017 season (when Mullen was hired) and how the roster has improved from a 36.1% Blue Chip Ratio in 2017 to the 62.8% in 2021, with every position group seeing improvement.

Let’s pull a thread a little more and compare the last 4 coaches (going back to 2008) and evaluate what each of those coaches left their predecessor. For Meyer, we will only evaluate the 2008 – 2010 classes since most of the recruits before that would have graduated (yes, this is not accounting for redshirts and/or transfers, that is a level of detail that is extremely difficult to track down and would ultimately have little impact on the overall point).

The other areas that jump out are at Linebacker and Safety.

Also, if you deep dive into the Defensive Line numbers, look at the steady drop off in the Blue Chip % from Meyer (85%) to Muschamp (59%) to Mac (46%). Looks like Mullen’s 2021 class is correcting that problem, but it probably will take another year to see the full benefits of that correction, which is probably why Florida brought in two (2) DL transfers for the 2021 season.

Evaluating the Blue Chips on the Roster 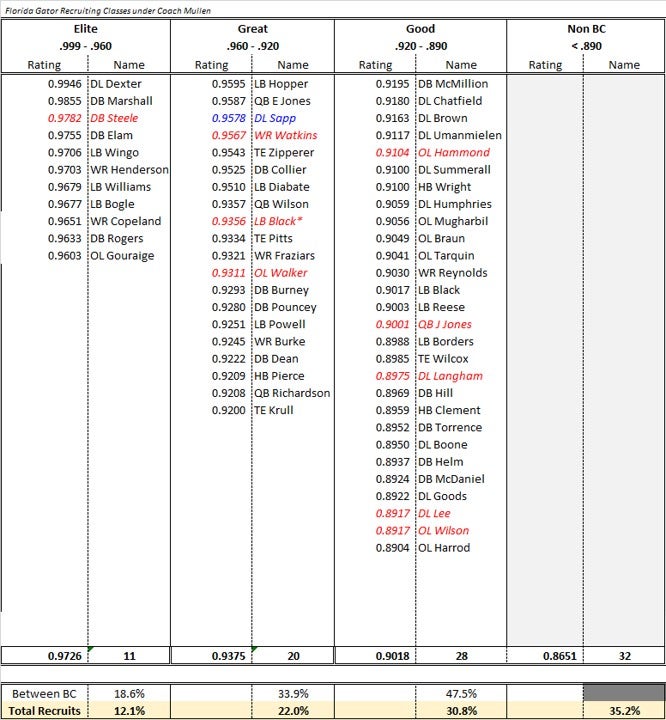 While this is a vast improvement over the prior two coaching staffs, the question we need to ask ourselves is how does this compare other teams?

Looking at how Florida’s Roster compares to others, let’s breakdown some other rosters (using the 247 Composite Roster Rating) and compare that to where Florida’s roster is presently. 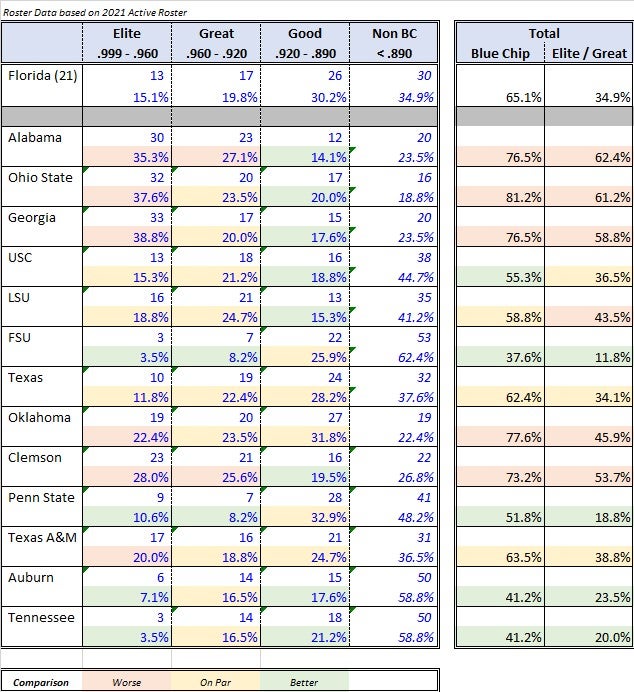 When you breakdown the numbers into the categories, you see that Florida’s talent is pretty evenly matched with LSU, UCS, Texas, Texas A&M and ahead of Tennessee, FSU, Auburn, and Penn State. However, they are considerably behind Alabama, Ohio State, Georgia, Clemson, and Oklahoma with respect to the Blue Chip % & the mix of "Elite / Great" recruits.

It seems to me that while Florida may not be recruiting at a level needed to be equal with the likes of Alabama, Ohio State, or Georgia, one could argue that they are recruiting well enough to at least complete with those top tier programs each year.

That is not to say that Florida is going to be winning multiple championships, but it does seem reasonable, given the accumulation of talent and the closing of the talent gap, that Florida has the talent to win an SEC Championship, the question becomes how reasonable of a chance is it and have frequent will they be?

Most, if not all, historical trends and analytics are not in Mullen’s favor, aside from Dabo at Clemson, no coach has been able to win a National Championship (in the modern era of football) without signing a Top 5 Recruiting class and outside of the first three years of being hired. Auburn has probably come the closest, back in 2013 (won SEC Championship) and again in 2017 (Lost SEC Championship game).

However, the data does strongly support the notion that Mullen has done far better than the previous two staffs with respect to recruiting & roster management and his success on the field (2018 going 10-3 with a Sugar Bowl win over Michigan; 2019 going 11-2 with an Orange Bowl win over Virginia and 2020 going 8-2 in an all SEC season and having a competitive game against Alabama in the SEC Championship game) has earned him the right to try and prove history wrong over the next 2 – 4 seasons.

State of the Union

The current state of the Mullen era is this, while the program is not at the elite level Florida is capable of being at, the ship has been "righted" and program is in good shape to be competitive with anyone on the field.

Many fans (myself included) are going to continue to be concerned about the level of recruiting and unwillingness to change certain staff members that are not yielding "championship" level results and/or mentalities, and those are reasonable concerns. However, I do think we need to keep things in the right perspective and not get so singularly focused on reaching that elite tier that we lose track of progress that has been made over the last 3 seasons to get to the level we are today… which is just outside of the elite tier.

That is not to say that we should be content with where we are today, but it does imply that some of us (mostly board posters) need to have a more balance perspective. I’m not suggesting that the level Mullen has restored the program to is the "best we can get" or that "we should not expect better", but what I am suggesting is that to lose sight of the accomplishment of getting the program to this level cannot and should not be so easily overlooked or dismissed because there are a lot of other programs who have been failing for years to achieve Mullen’s level of success. Because of that accomplishment, Mullen has earned the right to keep doing things his way and as a fanbase I think we can be reasonably confident that he will not "sink the ship" in the process of that pursuit (as Muschamp and Mac did).

And for those few who have already grabbed their pitch forks and starting making their way to the castle, maybe you should look around and honestly evaluate just how easy finding an elite coach is, because the reality is that it is not easy, in fact it is almost impossible… just ask Tennessee, Florida State, Auburn, USC, Texas, Nebraska, UCLA, and countless other "Blue Chip" programs that have been struggling to recapture their glory days for years.

Where do we go from here?

I realize that many fans are frustrated that Florida lags behind Alabama and Georgia, but you cannot (or should not) just fire a coach after the success he has had on (record) and off (roster restoration) the field after his third season just because he has lifted the program to a level just one notch short of expectations. Maybe he can defy the odds and win a championship or maybe he won’t, but regardless, we (as the fanbase) need to keep the proper perspective as it relates to Mullen and the success he has had at Florida.

Mullen certainly has the football knowledge to develop an elite powerhouse program, but there are two basic questions I have related to him achieving it:

Now, at the end of the next 2-3 seasons, if it turns out that Mullen is not the right guy for the job because he isn’t winning championships, then at least Florida has the time to ensure that they get the absolute guy they want and not just the "best" guy available. If the day comes that it is time to move on from Mullen, it should not be urgent process and should only be done when the #1 desired candidate is available and wants the job… you do not move on from Mullen and take a guess at his replacement (like Muschamp and/or Mac hires. or Tennessee’s approach to hiring a coach). The only time you would do that is if the ship starts sinking.

For those that are prematurely itching to switch out he head coach, I’m not sure there is a reasonable candidate out there that you would be willing to go "all in" on that you could be confident would be an improvement over Mullen. So, IMO we keep with Mullen and see what he can do over these next few seasons and if he is willing to replace a few staff members to improve recruiting and/or on field results, then even better!

FanPosts are written by members of the Alligator Army community, and do not necessarily represent the opinions, editorial judgment, or standards of Alligator Army or SB Nation.