After their dismal performance against the Georgia Bulldogs last week, the Florida Gators offense exploded for two touchdowns against the vaunted Missouri Tigers defense.

Is the Florida Gators offense getting worse, or is the fact that teams are stacking the box and making the Gators beat them by throwing the ball? Is it a combination of the two? Are they even related in any way?

My vote is yes for all of the above. For what seems like the sixth straight game, the Gators offense seems to be going backwards. That tends to happen when you can't really throw the ball and running the ball isn't designed to be your strong suit.

Sure. the Gators had success early in the year running the football, but let's be honest for a minute. That occurred because either a) they were playing against lesser defenses or b) they got lucky with a big play. For an example of those two options, look no further than the a) Kentucky and b) Tennessee games.

But, as someone else pointed out in the comments yesterday, it's better to be winning ugly than losing good. I'm a firm believer in the "There is no such thing as a good loss" mindset. All that does is allow you to associate losing with a good feeling. And who wants that?

Before we begin, I'd like to point out that we will not be going over Frankie Hammond's 43 yard touchdown catch that was called back because of a holding penalty on Jon Halapio. Since it was called back, it is like it never happened. 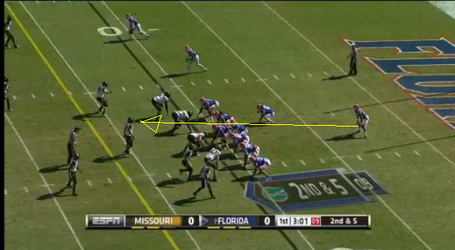 Just a simple handoff to Gillislee, who will run to the right side of the offensive line between the guard and center. Once he hits the line of scrimmage, the rest is improvisation. 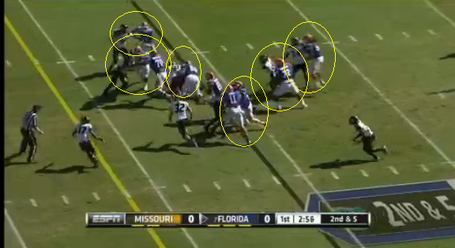 This is one of the few times this season that the offensive line (with the help of backs and receivers) has done a GREAT job blocking. Look at that! There are six blocks going on and every single one of them is a win for the Gators. 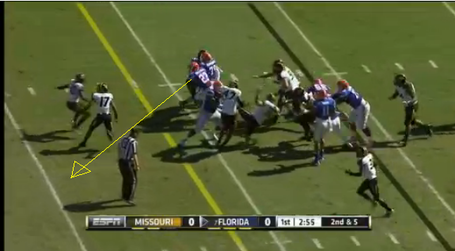 Just before Gillislee cuts the run back to the left, you can see that he is still taking advantage of some great blocks. Gators winning blocks nearly five yards down the field has to be considered a momentous occasion, right?

I'm guessing that, since Solomon Patton was rocked back to the Stone Age, Hines is now taking the ball on the jet sweeps. 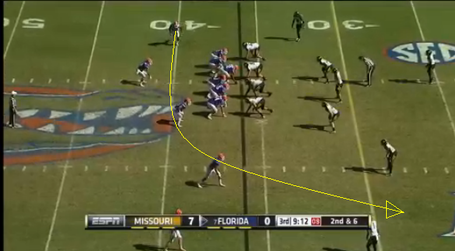 Hines will come in motion until he gets to Trey Burton and then he'll receive the handoff. After that, it's all about blocking and running forward. 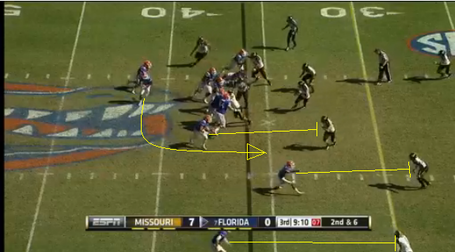 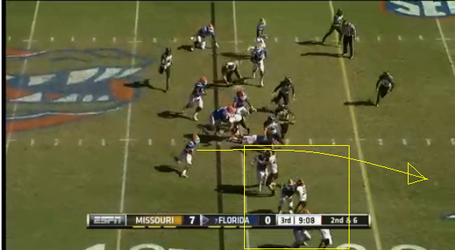 The three blockers (Jeff Driskel is the far bottom one) all do their job and that creates a great lane for Hines to run through. 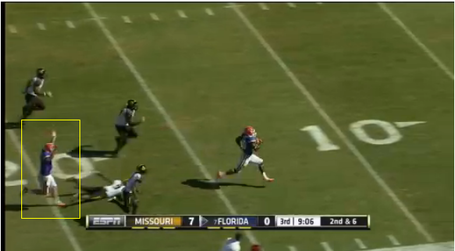 As Ken "Hawk" Harrelson would say: "He gone!" (That generally means he's out. In this case, he wasn't. Obviously.) 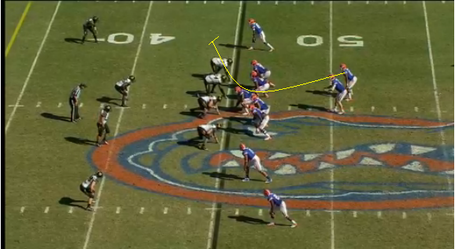 This is something the Gators should have been doing a lot more for the past month or so. At least Brent Pease figured it out before it was too late.

Then again, maybe it is too late. The Georgia game has already happened. Sigh. 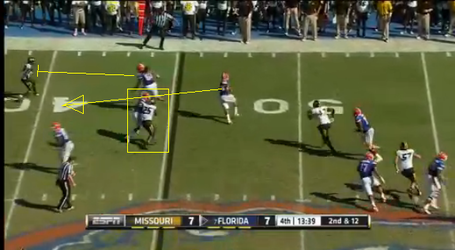 When Gillislee catches the pass, you can see that one of the necessary blocks is already taking place, the second one is about to happen and the third one is coming in a minute. 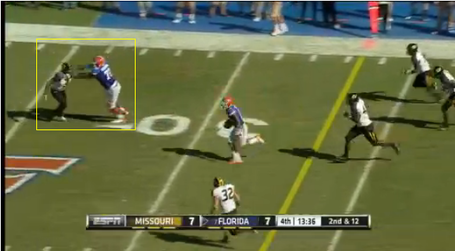 One final block (the third one) and it's touchdown, Gators.

The Gators now have two games left (Louisiana-Lafayette and Jacksonville State) to figure out their offense. I suggest that Pease and company do that because they play probably their toughest defense at Florida State in three weeks.

The Gators offense is going to need some serious help for that game.

Florida vs. Missouri: Gators welcome Tigers to SEC, The Swamp